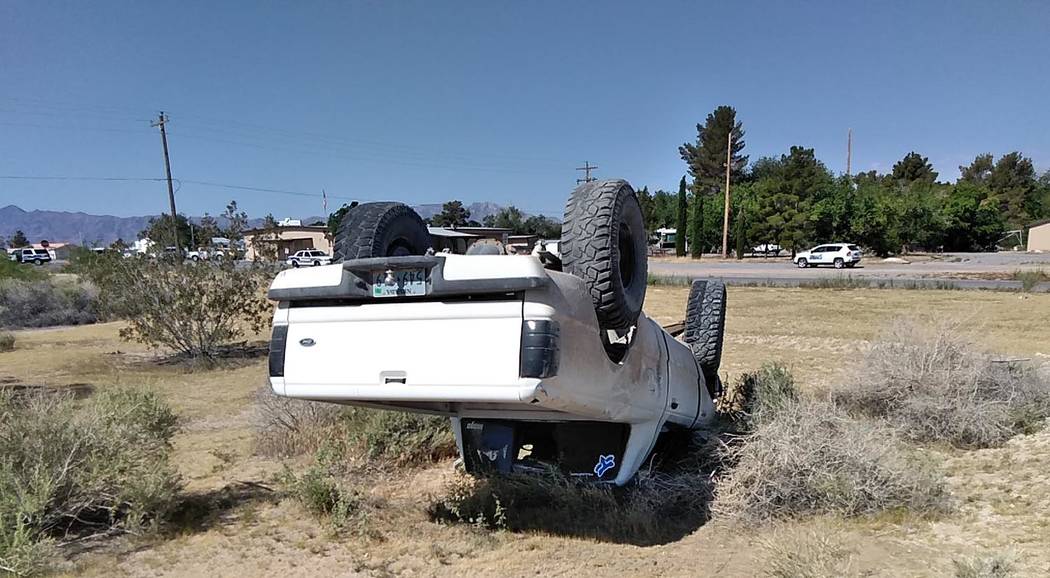 Selwyn Harris/Pahrump Valley Times At least one person was transported to Desert View Hospital following a two vehicle collision just after 9 a.m., near the intersection of Center and Second Streets on Friday Morning May 31.

“Crews arrived to find a vehicle that had sustained serious damage,” Lewis said. “The initial investigation revealed that a single occupant was mechanically entrapped inside the vehicle. Due to the nature of the injuries, Mercy Air was added to the assignment where a landing zone was established on Manse Road. The patient was extricated and transferred to the Mercy Air crew and subsequently transported to the hospital.”

On Monday, May 27, fire crews were dispatched for a report of a brush fire in the area of Jarvis Street, where upon arrival, crews found a slow-moving ground-cover fire, which was quickly controlled with no extension to nearby exposures. Lewis noted that the exact cause of that fire is unknown.

Other calls around the region

On Tuesday, May 28, fire crews were dispatched for a report of a single-vehicle rollover crash, with ejection at approximately 4:50 a.m. along Highway 160 near the Spring Mountain Motorsports facility.

“Upon arrival, we found a vehicle resting upright and we found the single occupant outside the vehicle,” Lewis said. “The sheriff’s office was on location with the patient, who sustained injuries consistent with flight to UMC Trauma. Mercy Air was added to the assignment where a landing zone was established on Highway 160.”

On Wednesday, May 29, at approximately 2:21 p.m., fire crews were dispatched for a report of a structure fire on the 600 block of East Street at space 28.

“Upon arrival, crews found fire showing from the roof of a fifth-wheel trailer used as a fixed structure,” Lewis noted. “All occupants were accounted for. There were immediate exposures on either side of that trailer. The dry grass also ignited, which took it right up to the next-door structure, but that was protected by the crews. The crews quickly controlled the fire without further extension. There were no injuries reported.”

Also on Wednesday, fire crews responded to a vehicle crash just before 10 p.m. on Highway 95 at mile marker 23.

“Upon arrival, crews found a vehicle well off of the roadway,” Lewis noted. “There was no entrapment, and one was subsequently transported by Medic 5 to the hospital.”