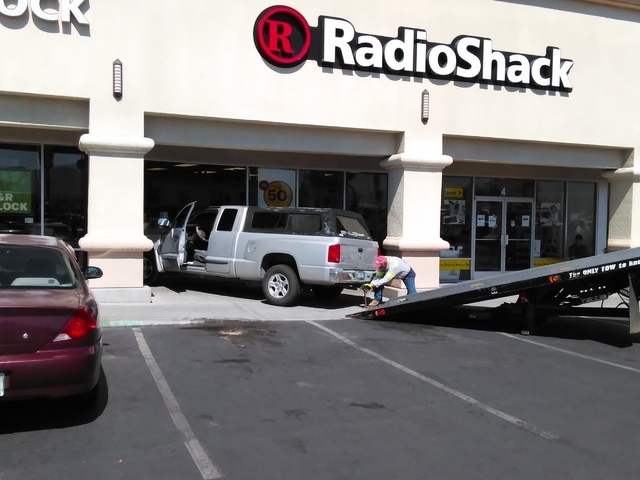 Though no injuries were reported, Fire Chief Scott Lewis said the elderly driver of a Dodge pickup truck was briefly entrapped inside the vehicle.

“There were two occupants in the vehicle and one was able to get out through the passenger side door,” he said. “However, the driver’s side door was jammed and required additional pressure to open it and free the driver. Both patients were evaluated, but neither of them were transported from the scene.”

After sizing up the damage, Lewis said the store’s structural integrity remained sound, as just the window frame and glass sustained the brunt of damages along with some products in the store.

Radio Shack Manager John Dolin said he was driving to the business when he received the phone call.

He noted the incident occurred roughly 30 minutes prior to opening for business, and did not know the extent of the damage to the inventory, as he had not yet entered the store.

“I literally pulled up and there was a pickup truck in my store,” he said. “I know that we are going to replace at least two windows. There is also frame damage. God only knows what kind of damage was done to the fixtures inside the store. It’s hard to say right now. It didn’t look like the driver hit the brakes because I didn’t see any skid marks on the pavement at all.”

Though there are better ways to begin the workday, Dolin said he’s certain the store will continue to operate while under repair this week.

He appeared to take the incident in stride. “We won’t let this setback prevent us from doing our jobs,” he said. “I am going to remain open and I have one of my employees coming in who will be able to run the register. We will have it all boarded up today and go about business as usual until we get everything fixed and repaired. It’s just one of those things that happens out here from time to time.”