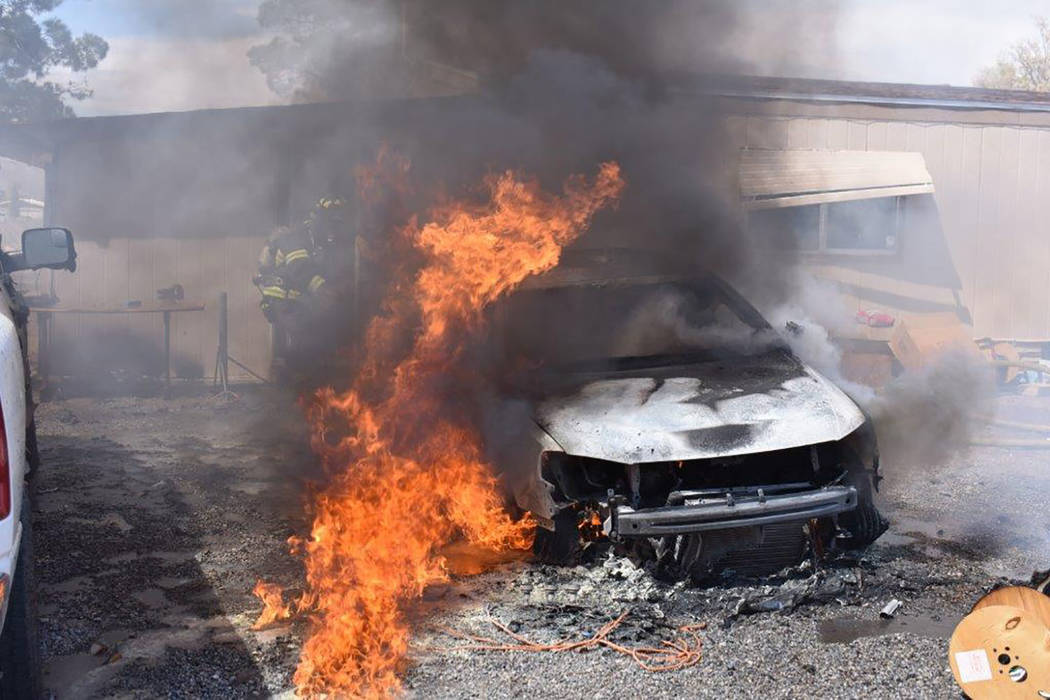 Special to the Pahrump Valley Times Though no injuries were reported, a passenger car was destroyed and a pickup truck sustained substantial damage following a vehicle and structure fire along West Vondell Drive on Saturday Aug. 25. Fire Chief Scott Lewis said the cause of the 2:30 p.m., fire appeared to be accidental. The exterior of the residence also received substantial damage. 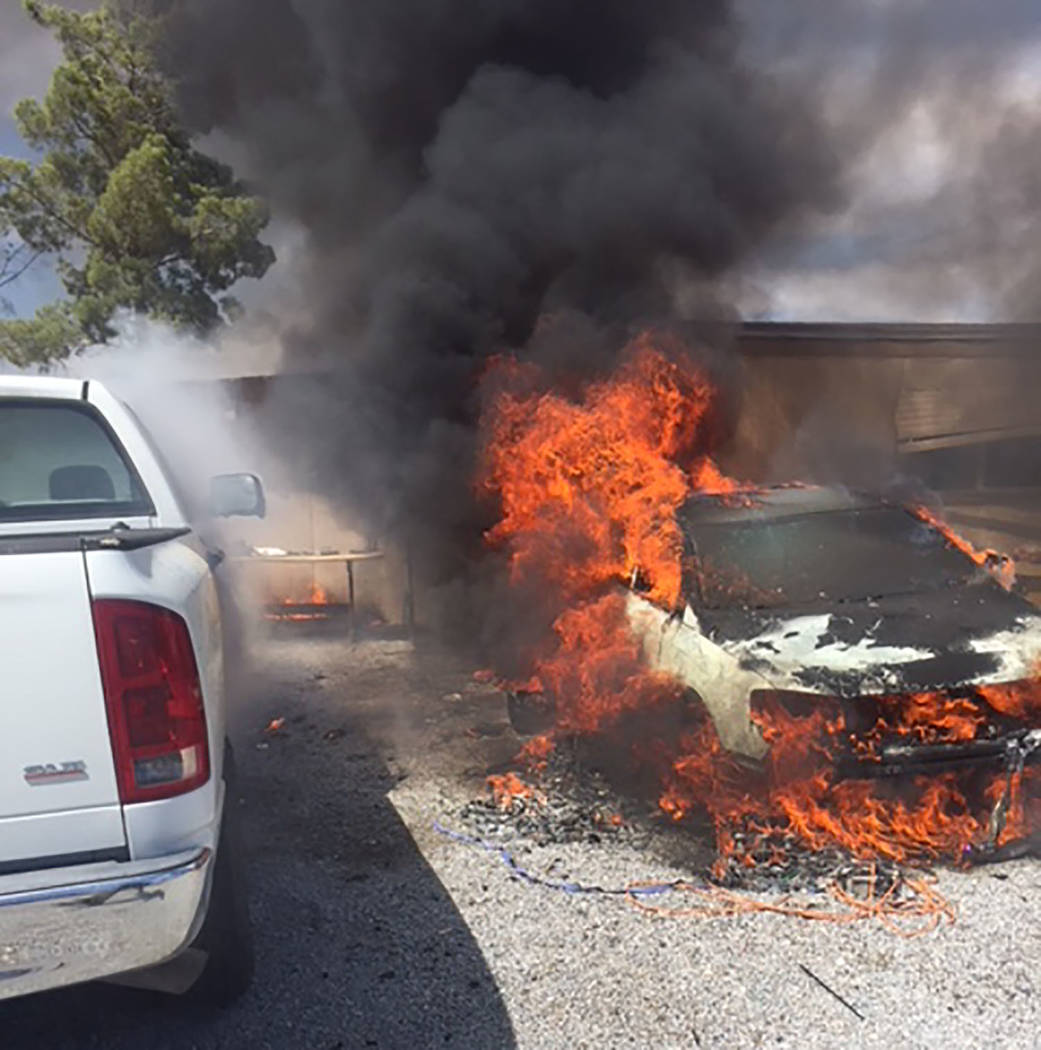 Special to the Pahrump Valley Times A box of over-pressurized aerosol cans inside a car is suspected to be the cause of an early afternoon vehicle fire, which extended to a residence along West Vondell Drive on Saturday. The fire was one of several blazes lPahrump fire crews responded to last week.

One passenger vehicle was destroyed while a pickup truck sustained substantial damage following a recent fire.

“We were dispatched for a report of a vehicle fire, however, as crews were responding it was indicated that the vehicle fire had extended to a second vehicle and also a structure,” Lewis said. “The assignment was repaged as a structure fire, bringing in additional resources.”

Lewis noted that once crews arrived on scene, they found one vehicle fully engulfed in flames, with a second vehicle about 30 percent involved.

“There was extension to the primary manufactured-style dwelling,” he said. “There was evidence of a flammable liquid fire between the two vehicles. Crews commenced exposure protection and were able to halt the fire without forward progress or further extension.”

Regarding the cause of the fire, Lewis said it is thought to be accidental.

“Possibly from an over-pressurization of aerosol cans stored in a box at the front of the property,” he said. “The fire destroyed a passenger vehicle and damaged a second pickup truck. It extended to the exterior wall surface on the primary dwelling. There were no injuries reported.”

One day prior, Pahrump fire crews were summoned to a structure fire on the 200 block of West Copper Flats Drive, just before 3:30 p.m.

“Crews arrived to find a one-story, single-wide manufactured dwelling with at least one addition attached,” Lewis said. “There was fire showing on the underside, spreading from one side of the structure to the other side. It was determined that the occupant was unaccounted for. The Engine One officer forced entry into the dwelling and found the occupant unaware of the fire.”

The sole occupant, who was safely removed, Lewis said, was actually unaware that the residence was on fire.

“The fire had spread from one end of the underside of the dwelling to the other,” he noted. “The occupant did not know the house was on fire, as it had not yet presented to the interior. Crews did a good job locating the unaccounted-for resident. We would also like to note that a passerby who reported the fire also placed some water on the fire prior to the arrival of fire crews, which helped. Had it not been for that passerby, it could have been much worse because we had some gusty conditions. Crews extinguished the fire with no further extension. The cause of the fire is thought to be accidental in nature.”

On Aug. 23, fire crews were dispatched to the 1700 block of East Falcon Street for yet another structure fire just after 11 a.m.

“Crews arrived to find fire showing on the underside of the structure and the rear exterior wall surface,” Lewis said. Crews commenced suppression and extinguished the fire with no further extension. The investigation revealed that there was an accidental ignition source on the rear porch. There were no injuries reported.”

Later in the day, fire crews responded to a rubbish fire on the 1300 block of Shady Lane.

“Crews arrived to find a relatively large rubbish fire located at the rear of the property,” Lewis said. “There was an abundance of personal property surrounding nearby exposures. Crews were able to control that fire with no further extension. There were two injuries reported.”

“Upon arrival, crews found the vehicle resting upright and the patient had self-extricated,” he said. “That patient was subsequently transported to Desert View Hospital. The cause of the accident is under investigation by the sheriff’s office.”