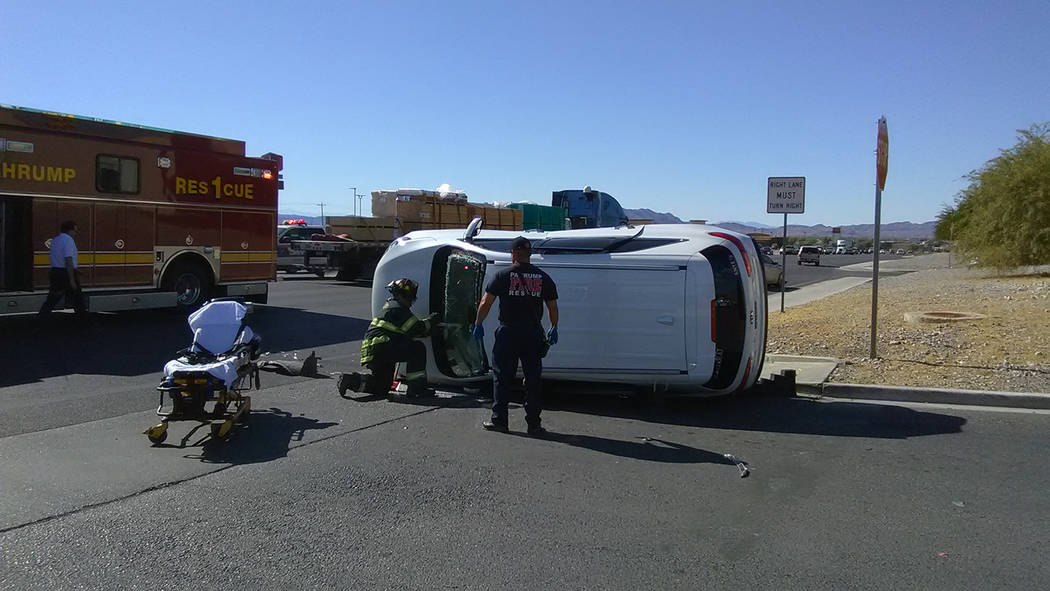 Selwyn Harris/Pahrump Valley Times A Pahrump woman was transported to Desert View Hospital after a high-impact collision along Highway 160 at the SuperPawn business entrance. Fire crews were forced to remove the front windshield of the white Kia van to free the entrapped driver, who is expected to recover, according to NHP. No additional injuries were reported.

One person was transported to Desert View Hospital following a violent two-vehicle collision along Highway 160 at the SuperPawn business entrance Wednesday afternoon in Pahrump.

Upon arrival, emergency crews were forced to remove the front windshield of the overturned vehicle in order to free the unidentified woman, entrapped inside a late-model white Kia passenger van.

One eyewitness said that she did not have to call 911, after the collision.

“I did not call because the cops had pulled someone over on the highway right there,” she said. “They were talking to the guy they had pulled over and the next thing I know I saw the white van turn over and all of the cops started running toward the van. I just hope the person is OK.”

A portion of northbound Highway 160 from Nevada Highway 372 was shut down to traffic as emergency crews worked to free the woman and clear the scene.

An NHP trooper said the injured woman is expected to recover.