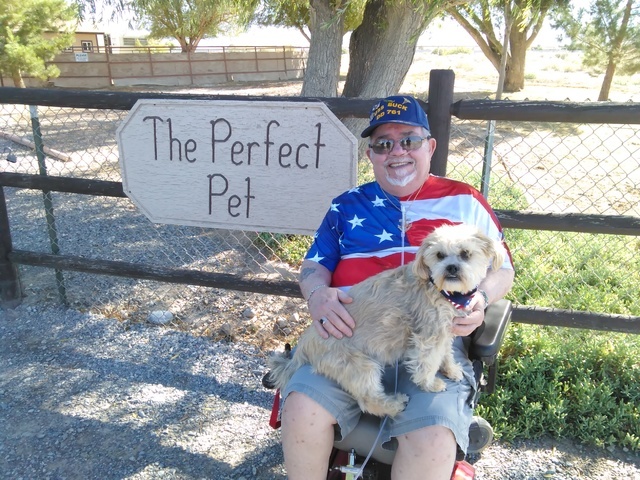 When Pahrump retired Navy veteran Dennis Doc Watkins lost a longtime friend and companion recently, his life was not the same.

His beloved cat Patches became ill and was euthanized because of the recommendation of a veterinarian.

Watkins, who is disabled and diagnosed with PTSD, uses a mobility scooter to get around and became dispirited with the void in his life.

Just recently, Watkins utter depression was transformed into joy when he happened by Symphony Animal Foundation and was introduced to Lil Dude, a 4-year-old Lhasa Apso, terrier mix.

Symphony Animal Foundation is a no-kill animal facility for all pets.

Caretaker Candy Kirk said it was a match made in heaven when man and dog made eye contact.

When he walked in, he was very lonely, she said. He had been to a couple of other places in town and they told him it would cost more than $100 to adopt a dog but he is on a very limited income. He even asked if he could make payments.

Kirk said Watkins, after being turned away from several other animal shelters in town when he could not afford to pay the adoption fees, stopped by Symphony as a last resort to find a new companion.

It was also his last stop.

One of our policies is that we adopt out animals to veterans for free, she said. He found this little guy and fell in love with him. He sat here and cried. He was beside himself because the dog loved him. It was amazing.

To learn whether Watkins and Lil Dude were still hitting it off, she called him the following day, as some adoptions just dont work out at times.

I called him the next day and he told me the dog slept with him and they just really hit it off, she said. I have never seen anything like it because he was so lonely. It got to the point where he was crying and I was crying. It was absolutely beautiful. He was so happy with this dog and it was like a dream come true for him. They bonded so fast.

Doc was just overjoyed and so was the dog, he said. Its like they were long-lost friends. He had a cat for about 17 years and the cat recently died.

Watkins himself said the friendship has been therapeutic.

All of the bad thoughts are gone because he wont let me have them, he said. He just keeps smiling at me. When I want to take a nap, he lies at the foot of the bed. Hes housebroken but I understand that hes never been trained. He loves me and I love him. As soon as I walked in there he jumped right in my lap.