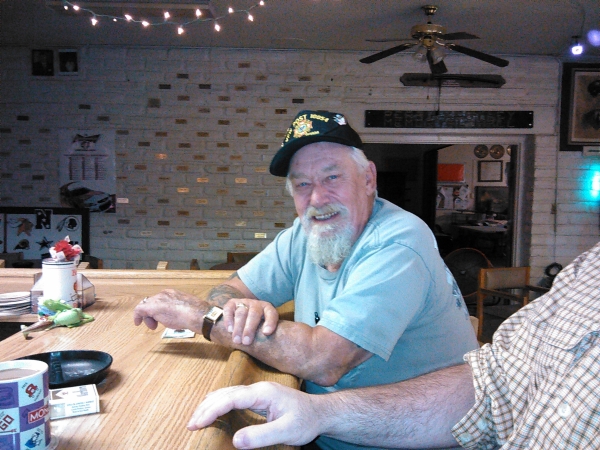 Last week, the VA awarded a $12.1 million contract to build the facility along Lola Street, adjacent to Desert View Hospital.

Though an exact groundbreaking date has yet to be set, local veteran Roy Zimmerman welcomed the news, with a bit of caution.

Zimmerman and fellow veteran Matt Eyre talked about the issue while sipping coffee at the VFW Post on Homestead Road early Tuesday morning.

“The effort to get a (clinic) here in Pahrump has been going on as long as I can remember,” he said. “I’m real happy about that but now it remains to be seen if it does really happen because we’ve been promised this so many times before.”

Zimmerman, a 23-year veteran of the U.S. Navy, also said the local veterans’ clinic does its best to serve the needs of area veterans, but they are overwhelmed.

“I think the veterans’ clinic here meets the needs of many veterans in town,” he said. “It’s busy all the time, but they are friendly and personable and I believe they do a pretty good job under the circumstances they have to put up with, but that is just my feelings.”

Seated next to Zimmerman was Matt Eyre, who served in the U.S. Army after enlisting in 2001.

Eyre, who is 100 percent disabled, makes regular visits to VA doctors in Las Vegas. He said he’s gotten the runaround on too many occasions locally, when trying to get medications and treatment.

He also noted there’s a certain chain of command that must be followed when he attempts to get his prescriptions filled.

“I have to call the pharmacist for my prescriptions and then the pharmacist takes a note and hands it to a nurse,” he said. “The nurse then gives it to the practitioner but she can’t write it so she has to get the doctor and usually someone drops the ball because there are so many steps.”

Staffing the new hospital was yet another concern for Eyre, who questioned whether the facility will retain its medical personnel.

“They keep saying this veterans’ (clinic) is going to be four times bigger than what we have, but my question is what are they going to do with all that space?” he asked. “I would say the biggest problem is keeping doctors and practitioners here. I served overseas in 2005 and 2006 and when I came back, there were no doctors. There was a nurse practitioner, a doctor’s assistant, and one doctor treating all the veterans in town.”

Both Eyre and Zimmerman agreed that many medical procedures require them to travel into Las Vegas for treatment.

“I was wounded in Iraq so I take my care very seriously,” Eyre said. “They tell me I have to take medication but I don’t get it every month. My medication comes out of Vegas so you either have to drive in and get it, or they will mail it and usually you don’t get it on time. Sometimes they are so swamped I don’t know if they just forget or whatever, but you don’t get your medication on time.”

“We have no mental health provider in Pahrump for veterans,” he said. “It’s just a social worker who holds group meetings and that’s the only mental health care that veterans can get unless you drive into Las Vegas.”

He and other DAV service officers work out of Desert View Hospital.

He said he too, has seen firsthand the frustration many local veterans are experiencing.

“We have our small clinic but they don’t have everything we need so we have to continually make trips to the VA hospital in Las Vegas,” he said. “You see the provider here and they set up an appointment where you have to drive to Vegas and it’s on the farthest side of town.”

Falcone also said not all veterans are reimbursed for expenses when making the trip into Clark County.

“If you have a certain percentage of disability you can get your mileage back,” he said. “If you are 30 percent disabled or higher then you get reimbursed for your mileage. Anything below that you have to pay for it on your own.”

Falcone also said there’s one very important thing he’d like to see at the site future site of the hospital.

“I think we need some type of signage so that when veterans drive by, they can see that it’s marked and they have a location,” he said. “It’s a little bit of encouragement for the veterans to see that here in town. From the things that I have read and heard I believe they’re going to finally come through with it this time.”

Falcone noted one promising aspect to the facility.

“The other good news is the hospital is supposed to have office space so we could do our claims in the new building rather than here. I thank the hospital every week because they provide space for us.”

Since 2012, Nevada lawmakers have pressed the veterans administration to move forward on a new Pahrump veterans’ hospital, but recent efforts have fallen short.

The original target date for a construction contract was Sept. 30, 2012.

VA officials said the project became mired within the bureaucracy, where lawyers got involved after questions were whether the VA had the proper authority to move forward with a project of that scope.

Once that was settled, it was discovered project costs had increased in the meantime and needed to be re-evaluated.

U.S. Rep. Cresent Hardy, R-Nev., picked up advocacy for the project after winning election last fall to the congressional district that includes Pahrump.

Hardy is hoping for smooth sailing from here on in, regarding the construction of the hospital.

“The delay to award this contract must not be followed by delays in construction,” Hardy said. “The VA owes it to our veterans to keep this project on track and I won’t accept anything less.”