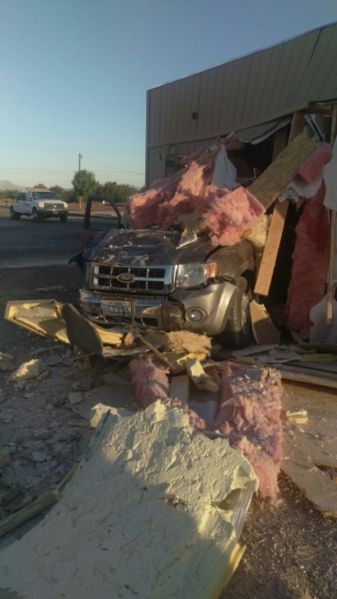 Pahrump VFW Post 10054 Commander Tom Vick believes if someone literally drives their car through an occupied building, the driver should be the one responsible for the repairs, if insured.

Evidently that’s not the case.

In July, a local woman was driving along Homestead Road early one morning when she inexplicably veered off the road and careened into a section of the facility that was undergoing new construction.

The vehicle obliterated the new addition, along with materials, supplies, and a brand new walk-in refrigerator.

Vick said the woman’s insurance company, Triple A (AAA) in Las Vegas, is balking on the cost of repairs.

“It happened on July 13th and we’re still fighting with their insurance company,” he said. “We even had to hire a lawyer here in town. There’s no doubt that she parked her car inside my building and I want her insurance to make us whole that’s all I want. She is covered by Triple A insurance and she has $100,000 on her policy and we’re asking for the $60,000 make ourselves whole.”

To add insult to injury, Vick said the insurance company suggested that the VFW should foot the bill.

Additionally, Vick said the delay is costing the VFW lots of money, as his contractor can’t continue with the job until the insurance company pays for the repairs.

“The contractor still does not know what kind of damage she did underneath the concrete,” he said. “She took out the water and the electricity. We just paid a bill for electricity that we can’t even use.”

“This is impacting us very much and it is impacting the business,” he said. “We have 25 new seats that are not being used and we are losing $900 a month in gambling because we can’t get the gambling machines in here. It is putting our post and great financial difficulty because we rely on business to stay open.”

Earnest was incredulous when speaking about the issue on Wednesday.

“This is completely unbelievable,” he said. “The VFW got a real contractor who has been doing this kind of work for more than 20 years and that’s all he does is build things. He came in and gave them estimate of what it will cost to fix it. I’ve seen the pictures of the car, and it almost went through the entire VFW Post. It’s a nonprofit and they help the community.”

Earnest also said he was skeptical on how the costs of repairing the building was appraised by the insurance company.

“He is probably a former contractor and he decides based upon his review,” he said. “He said it’s going to cost an X amount of dollars, but that is not real world appraising. It was based upon some metric that he has and it’s just unrealistic.”

Earnest echoed Vick’s assessment that the woman’s insurance policy was more than enough to pay for the damages.

“There is a property damage clause that this lady had which was enough to cover the damages,” he said. “The VFW tried to work with them but they got frustrated and they approached me and I took the case.”

Earnest has since sent a final demand for the company to pay for the damages, or else.

“They’ve got two weeks to respond and if not, we are going to sue them,” he said. “You couldn’t ask for better people at the VFW. They are pillars of the community and great guys and gals. They are not looking to get rich they just want their building fixed. I told Triple A if they get in front of a jury in this county, they are going to lose.”

Earnest also said Vick is not asking for more than he and the VFW rightfully deserves, while noting the insurance company did not take into consideration the entire scale of what needs to be repaired.

Vick, meanwhile, said he just wants things to get back to normal so the VFW can continue serving the community.

“We are losing money and we are losing business because I don’t have any air conditioning out front anymore because it got knocked out,” he said. “We have to use a fan to keep things cool here. We have a small air conditioner in the back that we are using but that’s not enough. I’m not asking for any more money than the contractor said it’s going to cost. The contractor at the time, was doing his part for free.”

Vick was expecting to open the new addition on September 1 of this year.