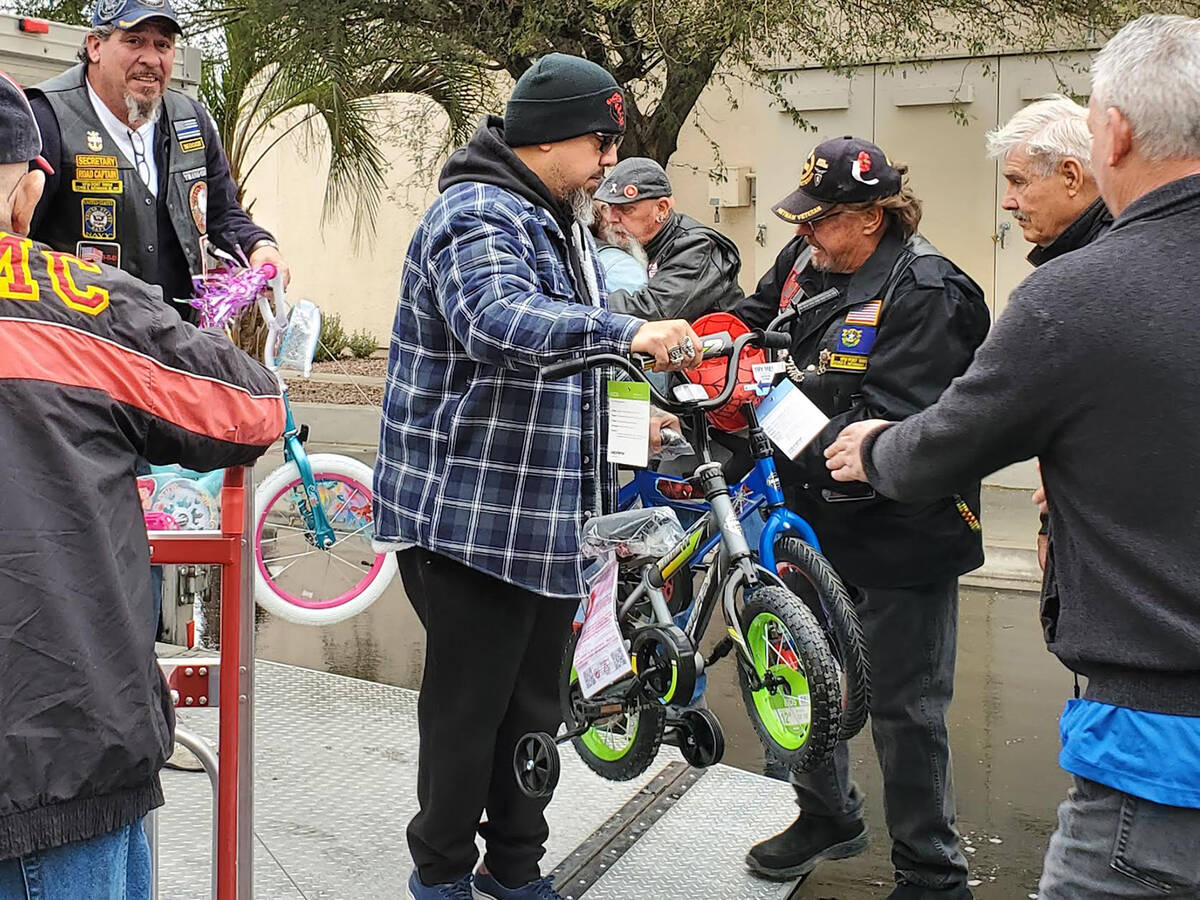 Special to the Pahrump Valley Times The Veterans of Foreign Wars Post #10054 and its VFW Riders delivered hundreds of toys to the Marine Corps League Detachment #1199 this month to support the Toys for Tots program. Photo courtesy of the VFW. 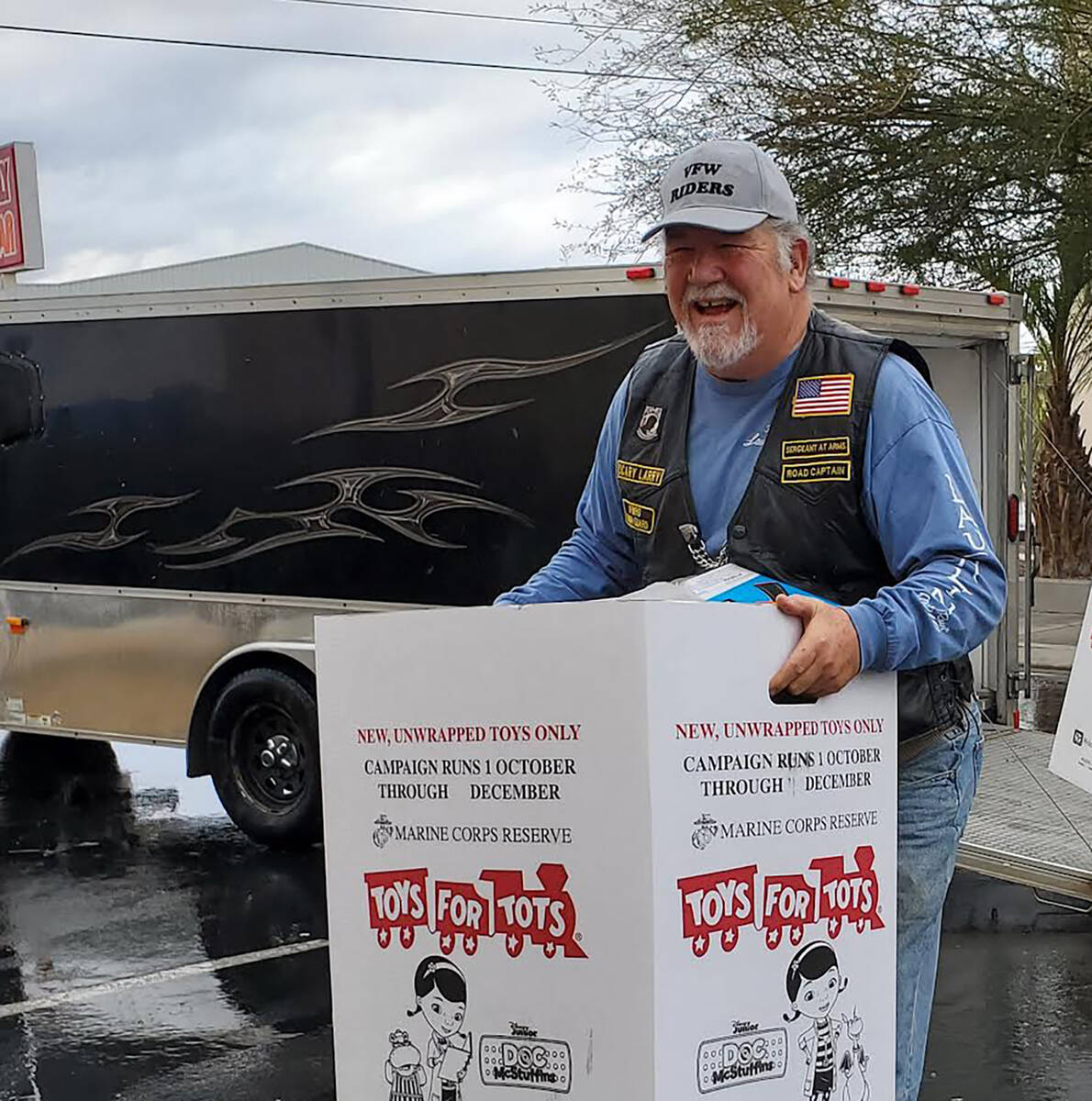 Special to the Pahrump Valley Times With a giant smile on his face, a local VFW Rider is pictured carrying a box of gifts for the Toys for Tots program. Photo courtesy of the VFW. 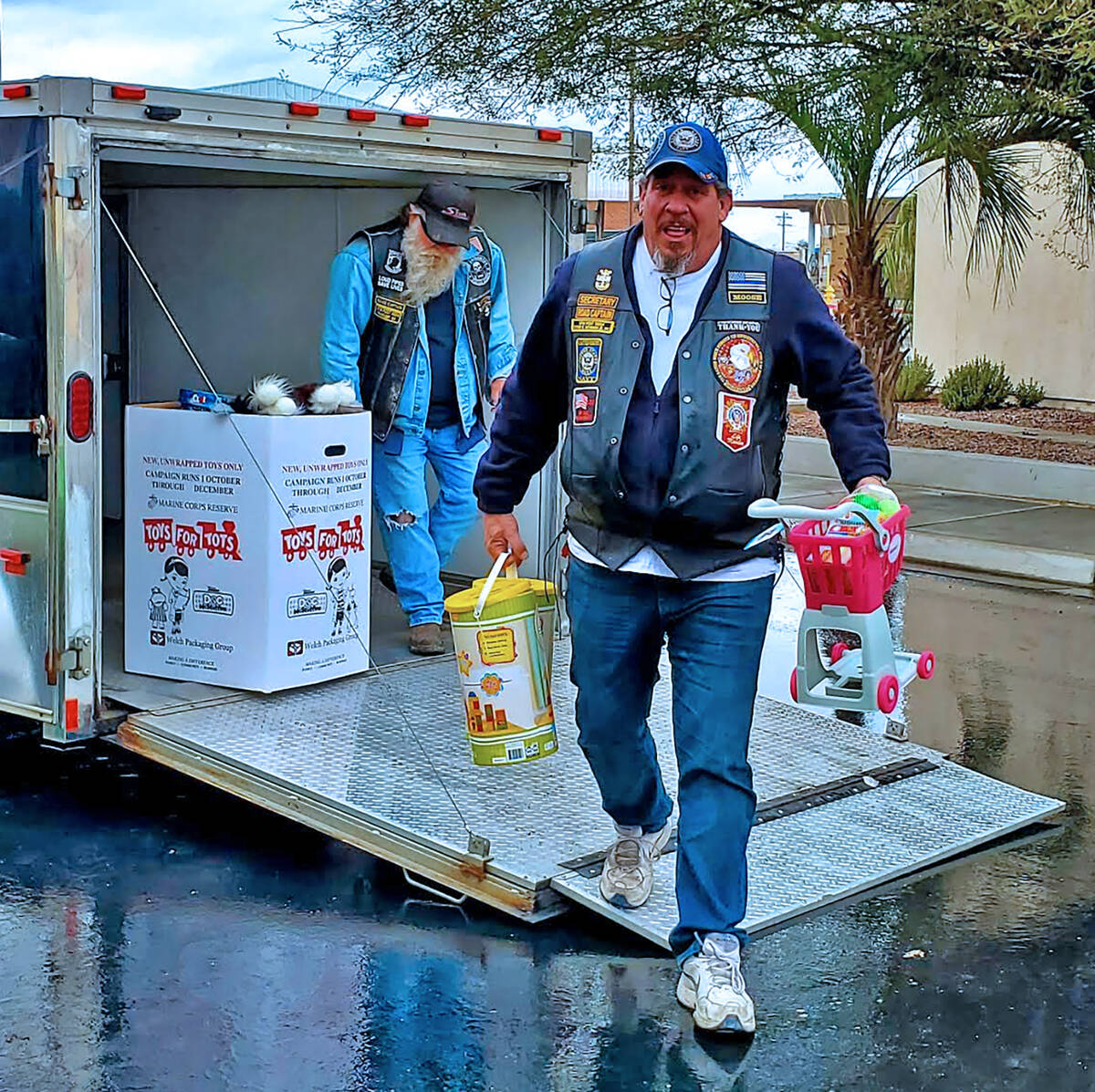 Special to the Pahrump Valley Times Veterans of Foreign Wars Post #10054 Commander Marty Aguiar is pictured with toys in hand, delivering items collected during the poker run hosted by the post and its VFW Riders. Photo courtesy of the VFW. 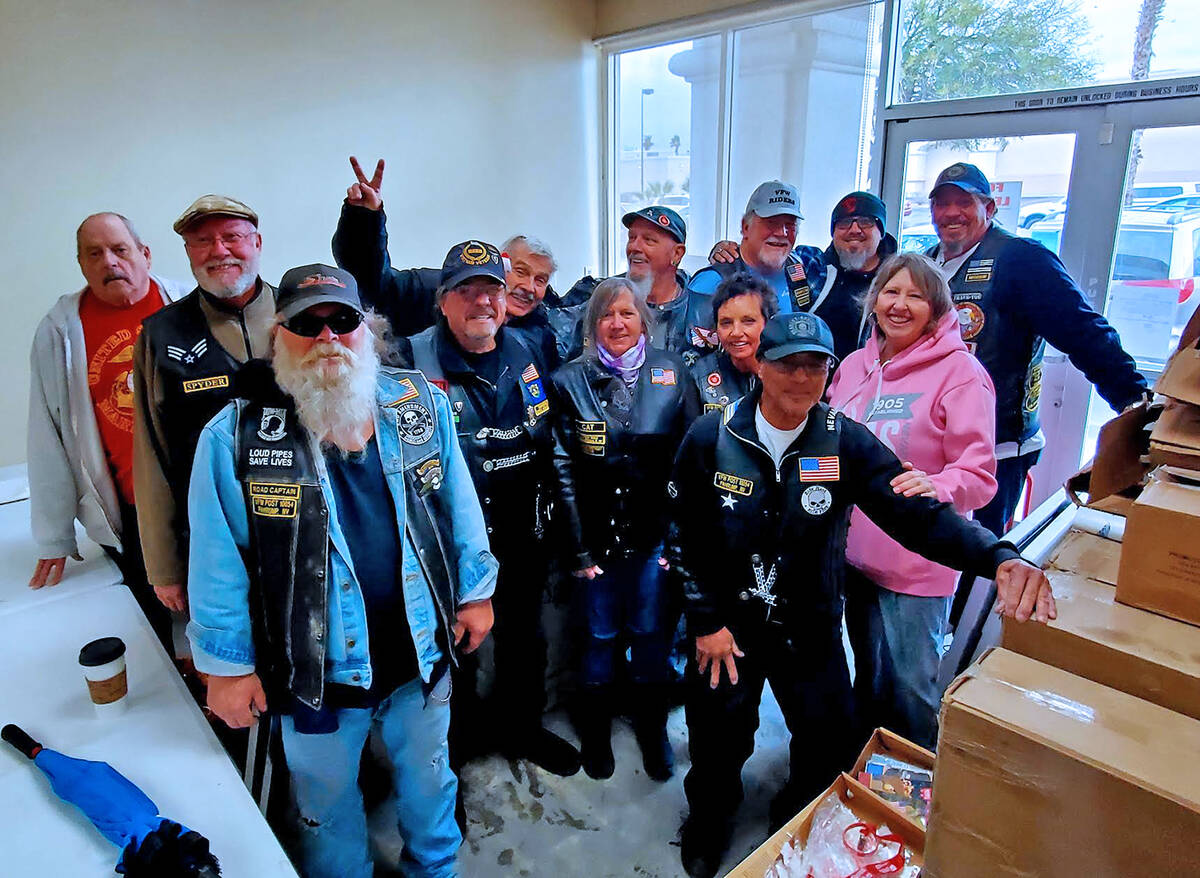 Special to the Pahrump Valley Times This photo shows the group of VFW Riders and VFW members who helped deliver all of the toys that were collected and purchased following the post's November poker run to support Toys for Tots. Photo courtesy of the VFW. 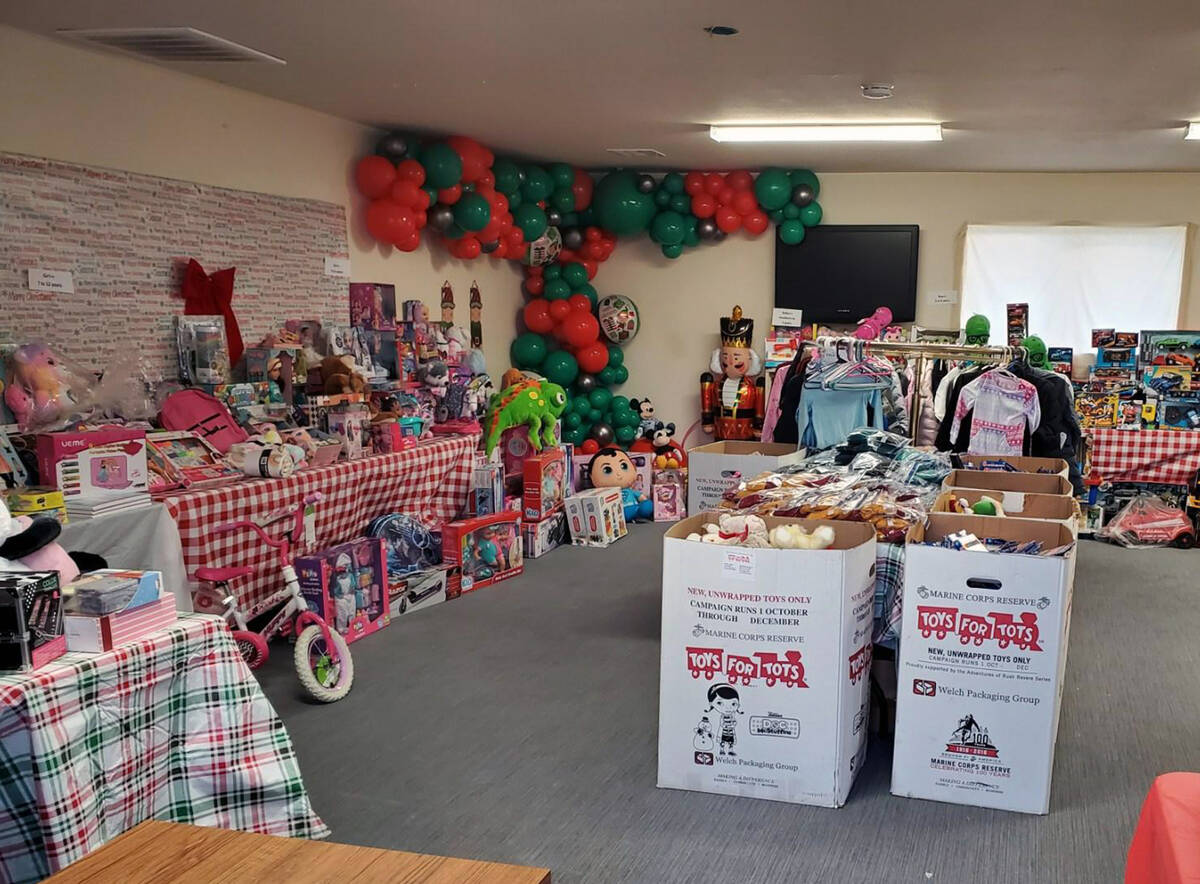 Special to the Pahrump Valley Times Nevada Outreach partnered with the Marine Corps League in the Toys for Tots program, setting up a room stocked full of gifts that parents were able to select from. Photo courtesy of Nevada Outreach.

The Veterans of Foreign Wars Post #10054 and its VFW Riders have helped make Christmas a whole lot brighter for area families this year by providing a huge donation of gifts to support the local Toys for Tots program.

Sponsored by the Marine Corps League, the Toys for Tots program is well-known throughout the U.S.

Here in the valley, MCL Detachment #1199 mans the enormous mission of providing toys to children from low-income families.

Big white boxes emblazoned with the red Toys for Tots train are placed in businesses around town each year, but these collections boxes are only part of what makes the local program successful. Other area businesses and organizations also lend a hand by holding fundraisers and collection drives of their own, with the VFW Post #10054 and the VFW Riders just one example.

“We did our poker run for Toys for Tots on the Nov. 20, and we had about 85 bikes participating,” VFW Post #10054 Commander Marty Aguiar told the Pahrump Valley Times. “Everyone brought toys and we estimate that, cash wise, after everything was said and done, we raised over $1,700 for Toys for Tots and brought in about $7,000 worth of toys as well, so our total comes to around $8,500 worth of toys this year.”

Aguiar said that cash was put to a specific purpose: purchasing toys for older children.

“We used that money to purchase toys for teenagers, because the teens always seem to get left out,” he said. “We went out and got toys for kids ages 13 to 17, things like drones, remote control cars, robot kits and other more mature toys that we know the teens will love.”

It’s only the second time for the VFW poker run, he said, but it was a big success. He and VFW members were delighted to have the opportunity to collaborate with the MCL Detachment #1199 and contribute such a large donation for the second year running.

Marine Corps member and Toys for Tots coordinator Mike Elam said the group is preparing to wind down in the next couple of days.

“We’ve done really well, we’ve gotten even more than last year and the people have been very generous,” Elam said. “And the VFW’s poker run gave us a tremendous amount, that was very nice of them and they did a great job.”

The Nevada Outreach Training Organization has played a major role in Toys for Tots as well, he said, setting up a room filled with toys and allowing parents who signed up for the program to stop by and select just the right ones for their own children.