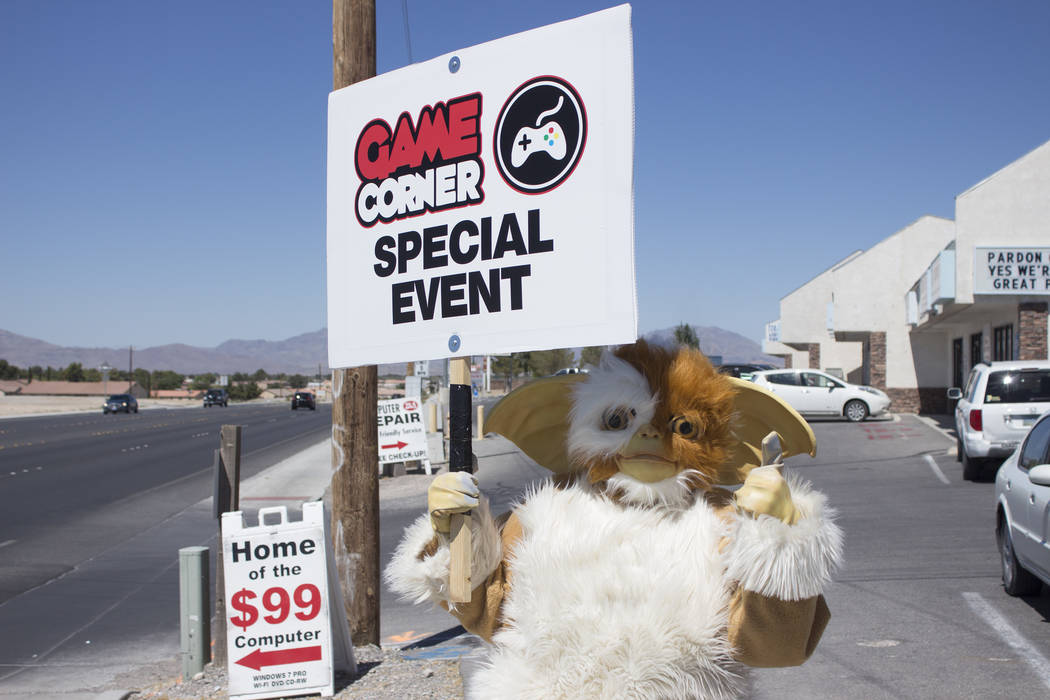 Jeffrey Meehan/Pahrump Valley Times Game Corner, which carries hundreds of video game titles, game systems and other things such as collectibles, had a few friends visits during a grand opening celebration at its 1190 E. Highway 372, Suite 17, location in Pahrump. The one-day event on June 23 brought out Gizmo and other characters from Star Wars and well-known comic books. 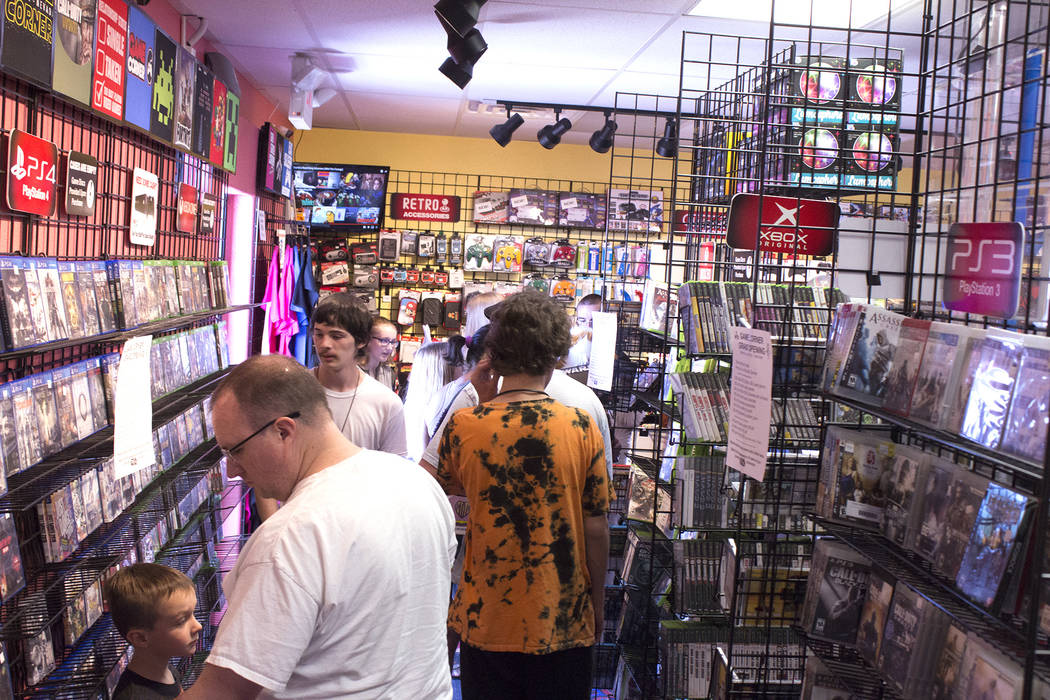 Jeffrey Meehan/Pahrump Valley Times People poured in to a grand opening event at a local video game store on June 23, 2018. Game Corner, which sits at 1190 E. Highway 372, Suite 17, has been inside the adjacent Great Computer Deals retail store for the last three years and expanded to its new space in February 2018. 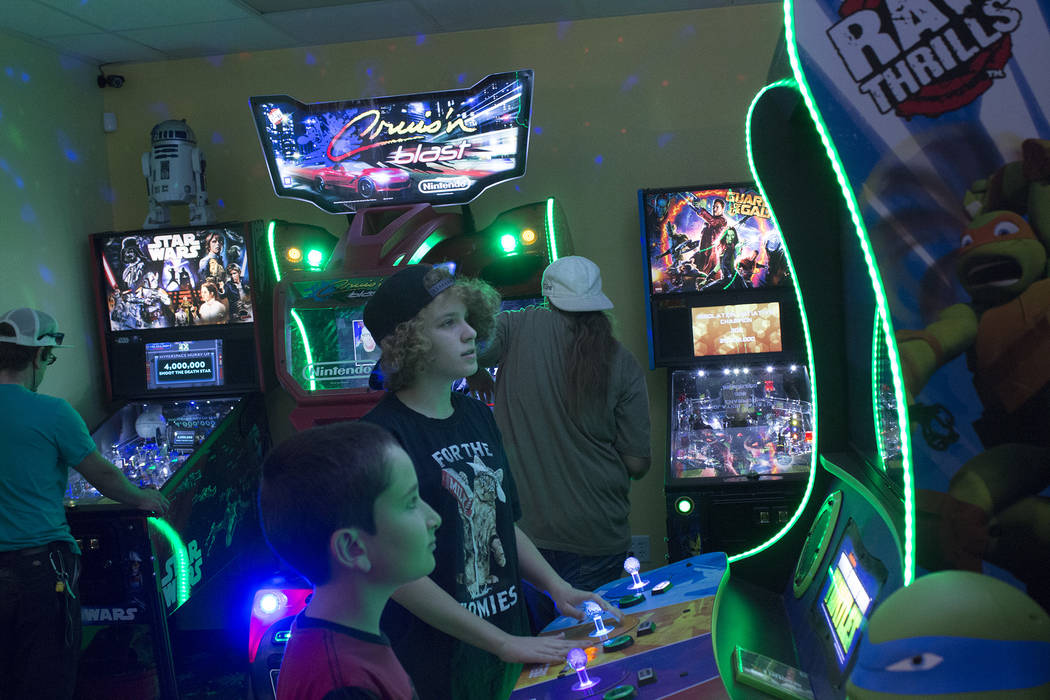 Jeffrey Meehan/Pahrump Valley Times Local children and others play a variety of arcade-style video games at Game Corner on June 23, 2018 at 1190 E. Highway 372, Suite 17. Game Corner expanded to the new space in February 2018 and celebrated its official opening at the end of June. 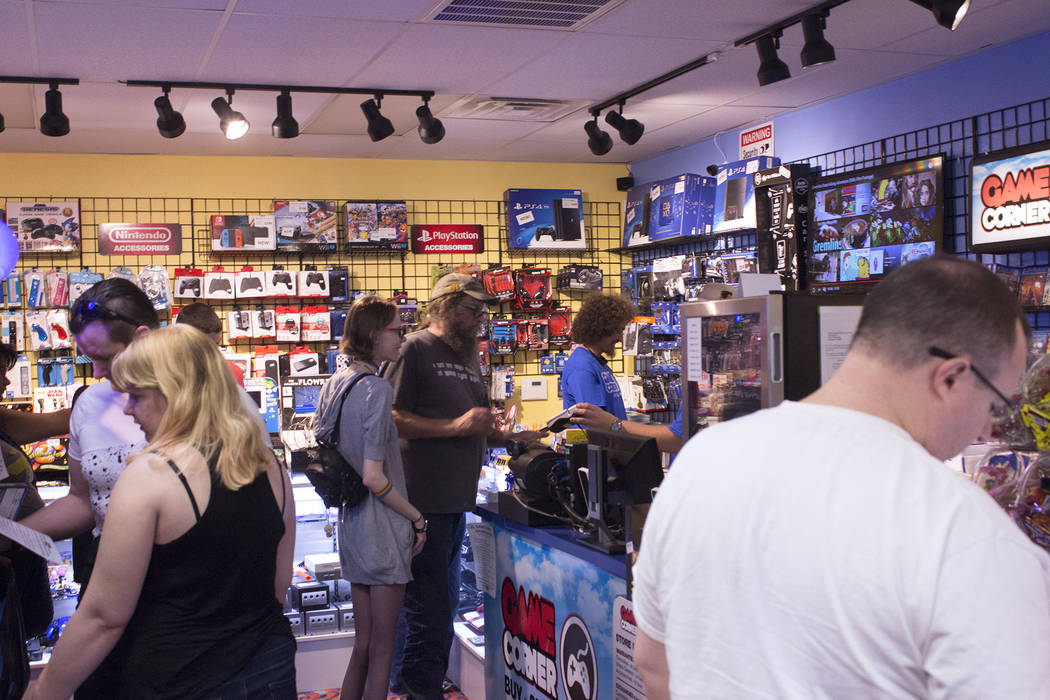 Jeffrey Meehan/Pahrump Valley Times Pahrump citizens grabbed deals and enjoyed an afternoon of video game action at a local video game retailer Game Corner on June 23, 2018. Game Corner expanded to its new space in February 2018 to 1190 E. Highway 372, Suite 17, and enjoyed its grand opening celebration at the end of June.

A few wild characters from the big screen and animated worlds that many gamers might recognize jumped out of their faux world and came to life during a grand opening event at a local video game store at the end of June.

The owners of Game Corner, a stop for many local gamers, held a grand opening event on June 23 to celebrate the expansion to a new, larger space and expansion of the store’s offerings. The event attracted a steady stream of locals from the mid-morning into the evening.

A few friends were invited to join in on the fun: Gizmo, a favorite from the movie “Gremlins” stopped in; the group was also joined by comic book character Thanos and some others, including characters from the most recent “Star Wars” movies.

Josh Osborne, co-owner of Game Corner, said his business was “good” but it was “growing” beyond what space was available in its previous location inside Great Computer Deals, which he also co-owns with his father.

The two stores now sit adjacent to each other, in two separate suites, at 1190 E. Highway 372, just south of Pahrump Valley Boulevard.

Osborne said he and his father opened the computer store in 2010, and Game Corner has been inside that store for about three years.

“We’ve been wanting to do this for a long time, but the timing has to be right, the space has to be open,” Osborne said. “So, when this building became available, and it was literally right next store to our computer store, it was a no-brainer.”

A lot more has been added to what they used to offer when they were just in one corner of the computer store, which had a soft opening in February.

“Now, we’re carrying a lot more accessories, a lot more games, and we’ve got a lot of movie memorabilia, collectibles …,” he said.

One local shopper thought the expanded store is a positive for the Pahrump area.

“There’s not a lot of gaming places out here,” said Colin Deshaw, a local resident, shopper and a longtime gamer. “There’s not a Game Stop or anything, so it’s really cool for Pahrump.”

Beyond what’s on the shelf, Osborne also has an area with arcade-style games, where people of all ages can stop in and play classic games like Teenage Mutant Ninja Turtles, pinball machines and others.

Osborne said that he’s seen a wide variety of demographics stop in, from small children to people in their 40s and 50s.

Digital disruptors abound across the U.S., but Osborne said there’s still plenty of room to have a physical store.

As an example, Osborne pointed to digital companies realigning the toy space, mainly the recent closure of Toys R Us, which he said was affected by places such as Amazon.com.

“I don’t see it going to the point where everything is just digital download,” Osborne said about the video game market. “Maybe 10 to 15 years down the road, that might happen. I don’t know.”

Beyond video games, Game Corner also has a live arcade area and other offerings.

Osborne said he is considering a video game tournament in the future, where the person with the highest score during such an event would get a prize.

Game Corner is also offering other features that local retailers might not offer.

Osborne said he does do trade-ins on video games, which can cost upward of $60 if they’re brand new.

“But if they bring that back in, we’re going to give them a lot of that money back to be able to trade in for something else,” he said. “It’s like if you beat a game, you’re done with it. You want to move on to something else.”