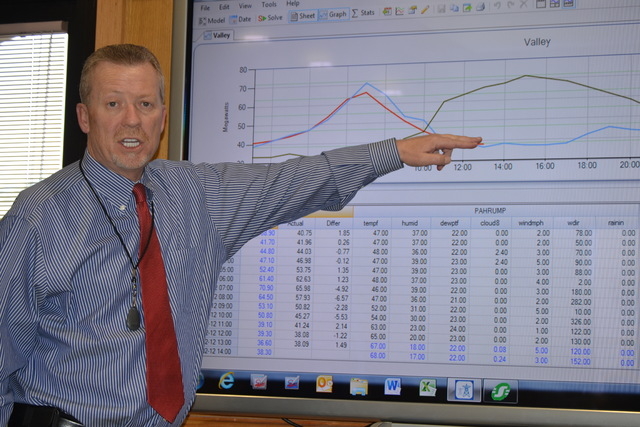 In a state well known for legalized gaming, both the National Weather Service and Valley Electric Association, Inc. “gamble” on the weather.

Both organizations weigh odds, based on trends, to forecast or predict what the weather will do in the future. VEA however, is held accountable by its customers, who are part owners of the company, as to how close to the mark the company gets.

Weather is a field fraught with many variables, including hurricanes and thunderstorms. Those two variables can throw a monkey wrench into computer models that both the weather service and Valley Electric use. Accurate predictions become somewhat difficult when factoring in those, and other, variables.

The VEA operations team prides itself on a high accuracy rate in its projections, which aids the company in long-term power purchasing. The National Weather Service has no calculated percentages of accuracy available.

“We can be fairly accurate with regards to forecast temperatures and probabilities of precipitation out to five days,” said Chris Outler, the Las Vegas weather service’s meteorologist. The extended range of seven days, he said, “has good skill to it.”

Outler described NWS accuracy to mean, “as close to observed weather as possible, that usually means within a degree or two for temperatures in the right ball park for precipitation.”

In order to help hedge “bets” on the weather, Valley Electric has implemented a complex monitoring system, that in some ways surpasses that of the National Weather Service. VEA Chief Operation Executive Tom Husted demonstrated its computerized weather monitoring system, which is so precise that it shows where lightning is about to strike.

In the event of a strike, the system shows the exact location where a transmission line or pole was damaged. That is a great tool, he said, as it has helped to reduce periods of outage for customer members to less than .02 percent of the time last year.

Given past climatological records, Outler said his office can make general assumptions as to what the weather will be beyond seven days, for a month or a whole season. Advanced computer modeling, he said, can also signal the chances for a wetter or drier year or a warmer or cooler year.

VEA personnel relies on a similar system, however, they are relying on long-range data that will help them make power-buying choices into the next year. A large percentage of Valley Electric’s business is weather dependent. Most of their customer-members are residential customers and residential usage, Husted said, is typically dictated by how hot or how cold it is.

Based upon a climate-comfort level in the 70-degree range, Husted said, VEA has seen a steady decline in energy usage over the past seven years.

He attributes that to climate change. Climate change, formerly referred to as “global warming,” is something that NWS officials also agree upon. However, that is where the agreement ends.

Based upon electric consumption and data collection, VEA has determined that climate change means that temperatures have shown a moderating trend – averages of warmer winter weather and cooler nights in the summer. Those statistics include data agreed to by NWS which shows hotter than ever summer daytime temperatures (above 100-degrees.) Summer evening temperatures, Husted said, have been “sinking.”

The discrepancy seem to occur with NWS modeling reading “urban” nighttime cooling temperatures in Las Vegas, which vary from those in more suburban Pahrump. Though, Outler said, increasing areas of pavement and concrete contribute to overall warmer temperatures.

Due to those weather trends, Husted said, most customer-members see their lowest electric bills in the months of March-April and October-November, when consistent use of air conditioning and/or heat are typically not necessary.

Other factors contributing to less energy consumption, Husted said, are energy efficiency and conservation programs. Though not a focus of VEA, Husted agreed that renewable sources such as wind, solar, geo-thermal, small-scale hydropower and bio-gas, have a place in national and state energy policy.

Weather is just one piece of the puzzle that completes the picture of the VEA. The company also factors in expanding or declining populations and businesses within its service area and monitors global economic indicators such as unemployment rates, oil prices, housing markets, manufacturing and interest rates when gauging whether to expand.

Given all of the tools and monitoring systems in place by VEA, the company, like many others, was not able to predict how long the economic slow-down or the severity of the recession that began in 2007, would last. Valley Electric has partnered with community, civic, utility and government agencies to monitor trends for growth and efficiency in planning. The group meets on a monthly basis to share information. That way, Husted said, when new areas of development are being planned, water, sewer and electric lines can be planned so newly paved roads will not have to be dug up.

Though VEA is a local company, they operate globally, with the bulk of their power purchased from an Australian company. VEA is also the fourth-largest transmission owner in California Independent System Operator. An ISO acts as a marketplace operate in wholesale power. Most ISOs are set up as non-profit corporations using Federal Energy Regulatory Commission or regional commission governance models.

VEA is also a monopoly. Husted explained that electric companies have a designated service area. That allows for only one company to operate in a particular area and removes the duplication of expensive infrastructure.

There is little doubt that Pahrump residents will soon be making use of air conditioning units with another hot summer season expected, according to Outler. That information, he said, is based on the past 30 years of seasonal trends.

The odds of rainfall, he said, are a little less uncertain. “There are equal odds of above or below normal rainfall,” he said. Pahrump is likely to see some precipitation this season with a variable monsoon season and hit-or-miss thunderstorms. Maybe.