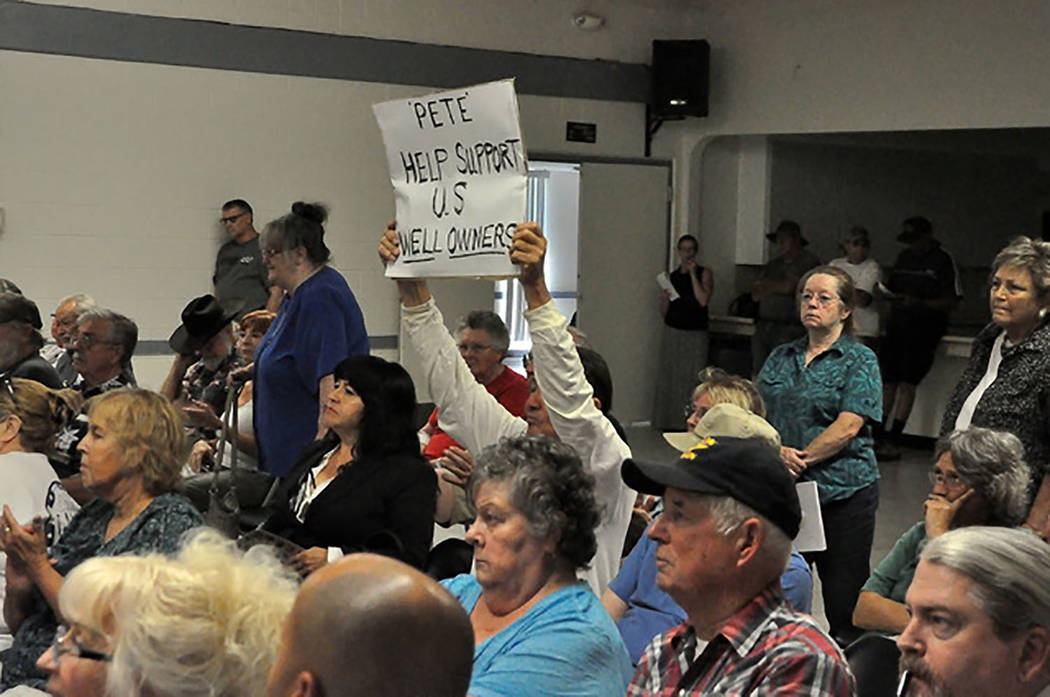 A Pahrump resident waves a sign during a 2016 meeting with state Sen. Pete Goicoechea. Goicoechea stopped in Pahrump to get input from domestic well owners ahead of Legislative Commission Subcommittee to Study Water's final session. Horace Langford Jr./Pahrump Valley Times

Senate Bills 271 and 272 are sponsored by the Legislative Commission’s subcommittee to study water, a body which met around Nevada last year to address how the driest state in the nation can better manage its most precious resource.

Domestic wells do not have permitted water rights but are allowed to pump two acre-feet of water annually. But because Nevada water law is grounded in the doctrine of “first in time, first in right,” domestic wells are last in line when it comes to entitlement.

Under existing law, the state engineer could shut down domestic wells to protect the rights of senior water rights holders if there is not enough water to go around.

The intent of SB271 is to specify in law that if that situation should occur, domestic well owners would still be allowed water for indoor domestic use, pets and livestock — provisions they are not currently afforded.

SB272 authorizes the state engineer to limit new domestic wells to one-half acre-foot of water annually if a basin is designated as a critical management area where pumping routinely exceeds perennial yield — the amount of recharge needed to sustain groundwater levels.

An amendment sought by State Engineer Jason King would change the reference to perennial yield to include any basin that is overappropriated — where water rights accounted for on paper exceed water that is actually available.

“The language as currently drafted will not address the very basin that was the birthplace of this bill — Pahrump Valley,” King testified. “While Pahrump is overappropriated, it is currently not overpumped and, therefore, would not be subject to the 0.5-acre-foot limitation.”

There are about 11,000 domestic wells in Pahrump and roughly 8,000 undeveloped lots where wells would be needed.

Nye County water officials have projected 2,000 wells could go dry in the next 20 years unless steps are taken to bring the basin back into balance between recharge and use.

If enacted, SB272 would only apply in overappropriated basins for new wells drilled after July 1. It does not authorize the state engineer to restrict withdrawals from existing domestic wells or existing wells requiring repair or replacement.

King stressed that neither bill takes away the state engineer’s ability to regulate domestic wells when a curtailment is ordered, including the denial of new wells if they would interfere with existing wells.

Critics objected to government intervention of domestic water use and pointed a finger at the state engineer’s office for approving development maps decades ago that they said contributed to overappropriation.

The committee took no action on the domestic well bills.