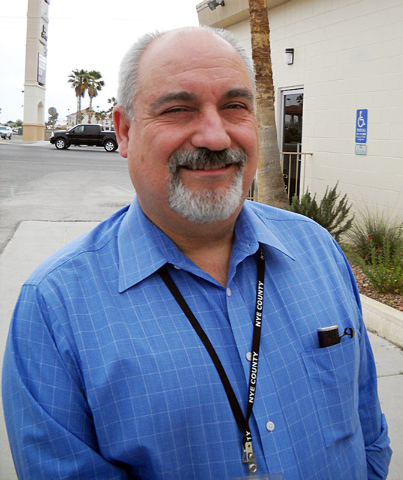 Nye County Water District General Manager Darrell Lacy said the intent wasn’t to slow the process of approval for medical marijuana establishments but gain additional information on the emerging agricultural industry. The state hasn’t set a limit on the number of medical marijuana grow houses that can be permitted, Nye County Commissioners back in June approved special use permits for 14 grow houses, which are pending state approval.

The test case involved a special use permit granted to Acres Cultivation LLC, which plans to grow marijuana and produce medical marijuana products on 37.72 acres at 950 E. Anvil Road in Amargosa Valley.

Board member Michael Lach said property owners were already growing pine trees on the property and were merely changing their manner of use.

Lacy felt there were unknowns in the growing marijuana business.

“We think right now everyone will be using organic means of growing but if someone got into very intensive use of chemical fertilizer or other things, or if in the future the state law changed to allow recreational growing, instead of nine growing facilities we had 30, then we may want to get to a point where we’re trying to require low water use technologies,” Lacy said.

Board chairman John MacLaughlin said water quality may need to be addressed before it becomes a problem, citing the nitrate problem created by agriculture in Pahrump Valley.

But board member James Eason, the Tonopah town manager, felt regulation should be left to the Nevada Division of Environmental Protection. He said a monitoring well could be expensive.

But board member Greg Dann said the questions would be important to monitor the static water levels in Pahrump and the water quality with all the septic tanks.

Lach felt the board was singling out medical marijuana for water issues.

“If an individual is coming in front of us saying he’s going to grow pistachios are we going to make them do this and if we don’t are we discriminating against the people that grow marijuana by saying we want to monitor theirs or are we making anyone who wants to make any agricultural changes of use in Nye County have to go on a monitoring program? I have no problem with these people changing their use from pine trees to marijuana if they want to do that, but if we have a monitoring program for them we ought to have it for everybody,” Lach asked.

Lacy said county commissioners had questions about water use when debating the issuance of the special use permits. He said there could be other people with water use problems that could be required to obtain special use permits in the future, noting concentrated animal feeding operations like the Ponderosa Dairy are required by NDEP to have monitoring wells to check for water quality.

Champ Roach, manager of Hydro Greens, a medical marijuana applicant, said his growers plan to keep track of the water chemistry themselves. Roach already operates a basil farm in a greenhouse on the south end of Pahrump.

Board member Jay Dixon, a senior hydrologist for Round Mountain Gold, made the motion to approve the water impact application but amended the requirement on supplying water chemistry information to comply with the standard information required by the Nevada Division of Environmental Protection, which is followeed by most testing labs. It passed unanimously.

• Under public comment at the Monday meeting, Paul Strange, a consultant for CivilWise Services, asked the water board to support the re-submission of plans for a 231-slip recreational vehicle park on 55 acres at 600 S. Leslie St. with a three-acre artificial lake.

“We do have 125 acre feet of water that’s already been permitted and certificated for the land that’s in that area. The lake usage itself is a very small percentage of the 125 acre feet, even using the worst evaporation numbers we could find we still have sufficient water for the lake to sit and evaporate away,” Strange said.

“We feel that the lake is an important element to the RV park. It is an attraction that draws people, mostly tourists, into Pahrump, therefore drives tourism and associated income that comes with that. It’s very important for our client that the lake be part of this project and we would hope that we can work together on a solution that allows this lake and this project to move forward that benefits everyone, most importantly Pahrump and its economy,” he said.

In other matters, District Attorney Brian Kunzi wants a discussion between the water board and county commissioners over the authority of the water board, which was given a wide variety of powers under Senate Bill 222 passed by the 2007 state Legislature. Kunzi said the water board should deal with everything dealing with water.

“There’s no case law out there, there’s nothing we can go to that’s really going to define what we do,” Kunzi said. “We need to bring all the parties together to come to some grips so there is at least some uniformity where we’re not going to have these conflicts.”

Former water board member John Bosta, a member of the Amargosa Valley town board, questioned the water district’s right to grant an interest-free loan to the Shoshone Estates Cooperative to help build water improvements to deal with high arsenic levels in the northern Nye County community.