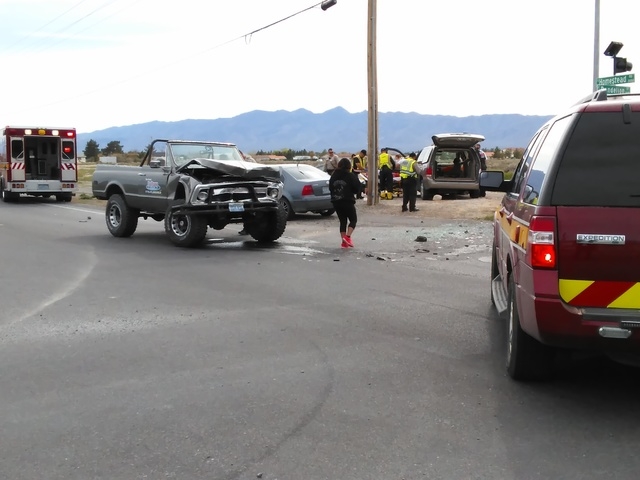 A series of service calls made for another busy weekend for Pahrump Valley Fire and Rescue crews.

On Thursday fire crews responded with Clark County firefighters for a brush fire along Highway 160 near mile marker 28 where the fire was extinguished in short order just after 6 a.m.

At 3:05 p.m., Chief Scott Lewis said crews were summoned to Petrack Park, adjacent to the fire station after reports of a power outage.

“Upon arrival, crews found multiple fuses were blown at a fuse box,” he said. “Power was restored approximately 40 minutes after the initial onset. It is unclear of the cause of the power outage.”

At 3:25 p.m., crews were dispatched for a motor vehicle collision at Mount Charleston and Pahrump Valley Boulevard.

“Upon arrival, fire crews found a two-vehicle accident with significant damage to both vehicles,” Lewis said. “Medics were assigned local patient care and transported that patient to the hospital.”

On Friday, crews responded to a grass fire in the area of Mesquite and Barney just after 6 p.m.

“Upon arrival, crews found a controlled burn that had gotten beyond control of the person attending that burn,” Lewis said. “It was in close proximity to a manufactured dwelling and the fire was quickly controlled with no extensions of any other nearby structures.”

Roughly two hours later, fire crews were summoned to Highway 160 for a two-vehicle collision in front of Taco Bell.

“We had a report that one of the vehicles had flipped over,” Lewis said. “Upon arrival, we found a two-vehicle accident with significant damage. One vehicle was resting on its roof. There was no entrapment and we assessed two patients but both declined medical transport to the hospital.”

On Sunday, fire crews responded to Highway 160, just south of Irene Street for another two-vehicle collision just after 9:30 a.m.

“Medic One transported two patients to Desert View Hospital,” Lt. Steve Moody said. “Nye County Animal Control was on scene to secure the five dogs that were inside one of the vehicles.”

Fire crews early Monday morning were summoned to Highway 178 at mile marker 62 near Shoshone for a single-vehicle rollover crash just after 2:30 a.m.

“Upon arrival, we found a one-vehicle rollover approximately 50 feet off the highway,” Moody said. “A female and child self-extricated and were inside another vehicle. They suffered minor bumps and bruises and were transported locally to Desert View Hospital for evaluation.”

Later that morning crews responded to Homestead Road near Pahrump Valley Winery for another two-vehicle collision just before 7:30.

“Upon arrival, we found a sheriff’s vehicle that was rear-ended by a minivan,” Moody said. “All parties involved refused medical.”