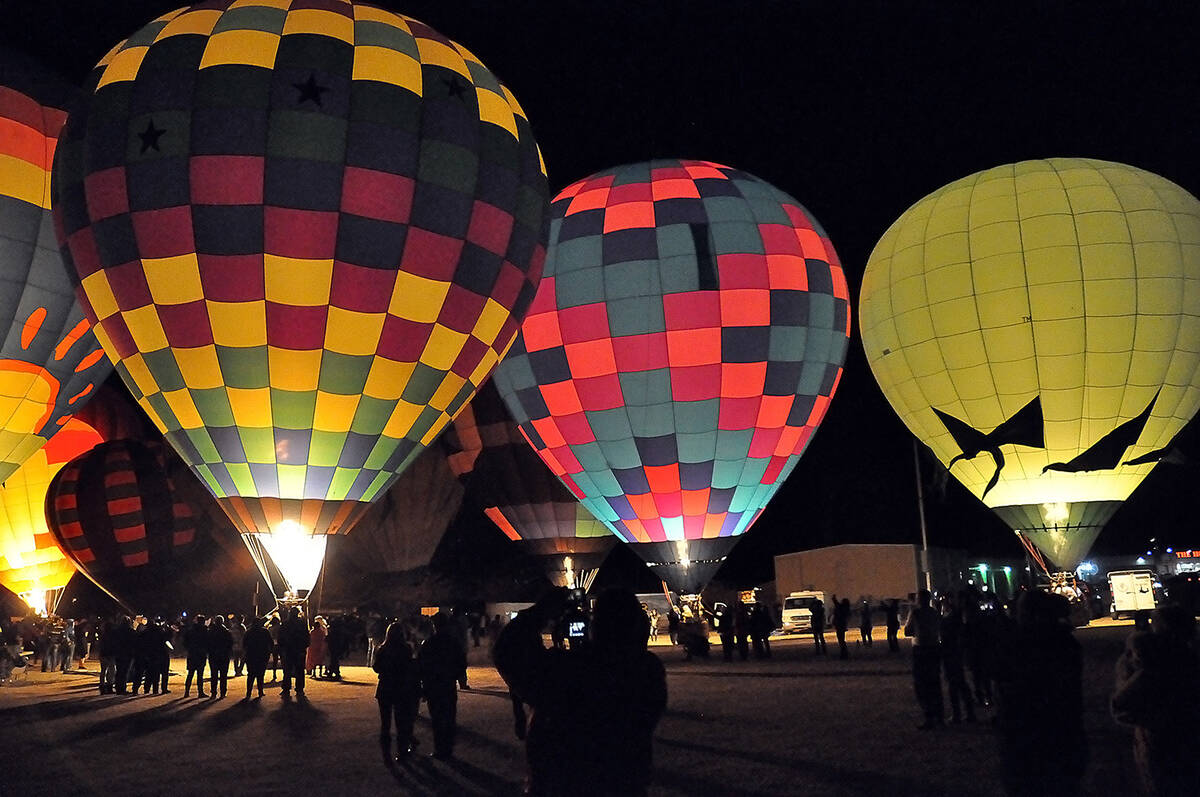 Horace Langford Jr./Pahrump Valley Times This file photos shows the scene at a Balloon Glow, which is always a big attraction for Pahrump Balloon Festival attendees. 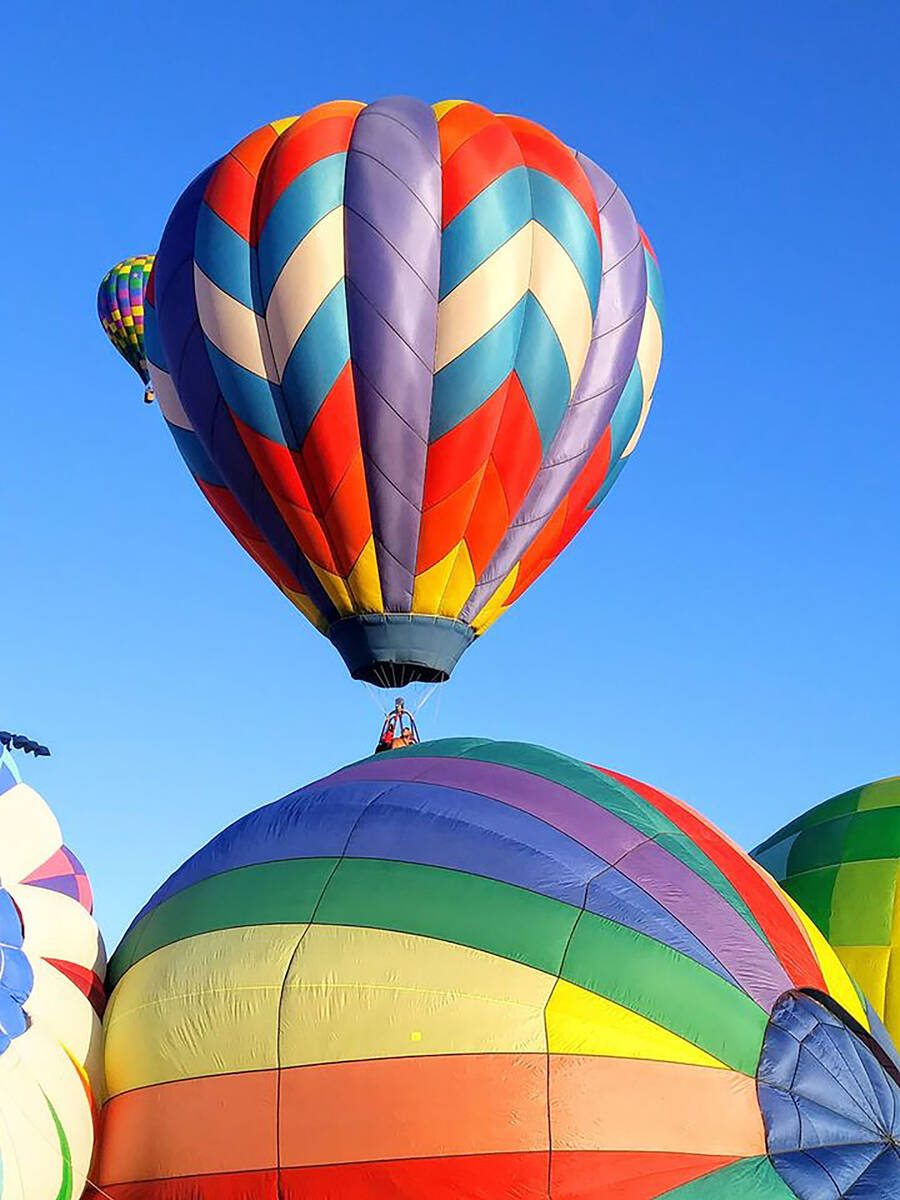 Special to the Pahrump Valley Times The 9th Annual Pahrump Balloon Festival will begin on Friday, Nov. 11 and continue to Sunday, Nov. 13. 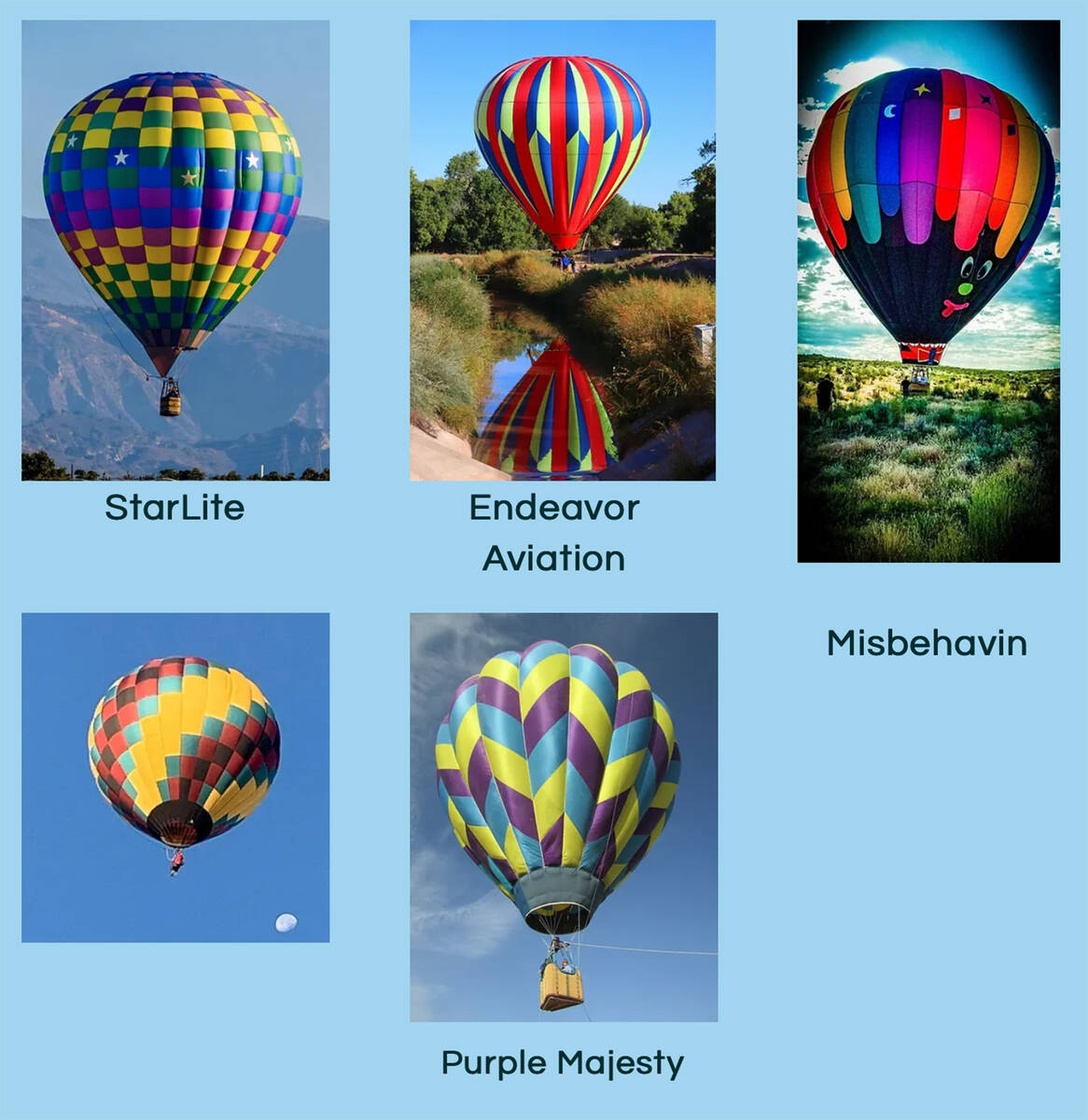 Screenshot This screenshot shows just some of the hot air balloons that are scheduled to take part in the 9th Annual Pahrump Balloon Festival.

Hosted by Doug Dubin and his family, in partnership with Doug Campbell of Balloons Over Pahrump, this year’s Balloon Festival will open on Friday, Nov. 11, which happens to be Veterans Day. Dubin said this date was not chosen at random as he and Campbell both felt it would offer a perfect chance to honor all of the brave men and women who have served in the U.S. armed forces. Therefore, the Pahrump Balloon Festival will, for the very first time, kick off with a ceremony dedicated to recognizing Veterans Day.

Hot air balloon crews will begin setting up for flights at 5 a.m. on Friday, Nov. 11, with the Veterans Day Sunrise Service set to start at 7 a.m. An American flag will be flown above the park while the Veterans of Foreign Wars Post #10054 and its VFW Riders conduct the presentation of the colors on the ground and a veteran sings the national anthem. Hot air balloons will also be making their first launch that morning to paint the sky with drifting color and the fun will continue all weekend long.

Each morning, Friday, Saturday and Sunday, the festival will begin at 7 a.m. with balloon launches and vendors will open their booths around 9 a.m. Attendees will have the opportunity to not only watch as the large, hot-air driven crafts glide into the sky but to feel the sensation of flying themselves, with either a tethered balloon ride or a traditional hot air balloon flight, tickets for which are available through the event’s website.

The Balloon Festival will also see the return of one of the most exciting features of past events, the Balloon Glow. When darkness falls over the park on Friday and Saturday nights, hot air balloon teams will have their aircraft anchored to the ground in readiness for a spectacle of illumination. Using their propane burners as torches of sorts, crews will light up their balloons to create a scene that is sure to elicit many expressions of delight and wonder.

As an added bit of excitement, Dubin and Campbell have also arranged for a special scavenger hunt of sorts. Attendees will be able to get a certificate for a free turkey but they’ll have to visit the vendor booths to do so, as these certificates have been hidden among the vendors for distribution to the crowd.

It’s not all about balloons, though, as there will be plenty of other activities throughout the weekend for patrons to enjoy.

While there will be no carnival at this year’s Balloon Festival, that doesn’t mean there won’t be a variety of exciting and adrenaline-inducing attractions. “Instead, we’ll have a Flight Simulator for an F-14 Tomcat and a rollercoaster that rotates 360 degrees for the big kids,” Dubin detailed. “As well as bounce houses for the kids with all-day passes available.”

A “Car Meet” is set for Friday night and the following day will see the official Car Show, where all kinds of classic and modern vehicles will be on display.

When it comes to vendors, the Balloon Festival is set to have a selection that should meet the needs of just about every person who comes out. There will be dozens of merchandise booths specializing in a huge array of items, including crafts, jewelry, clothing, toys, and much more. They will be joined by a variety of nonprofit and community-based organizations, as well as more than 30 food vendors offering everything from carnival-style eats and barbecue to sweet treats, tacos, Hawaiian delights, pizza and so much more. As Dubin predicted, “It will be the best food selection of any event in Pahrump history!”

There will be horseshoe and cornhole tournaments too, with two of the former and one of the latter.

DJ Soundz will be manning the stage and providing music for entertainment and there will be a karaoke contest for those who want to test their vocal skills. Anyone interested in singing just for fun can join in for $5 or for a $20 entry fee, attendees can be in the actual competition for a chance to win a prize.

For more information or to sign up for the tournament, karaoke contest, car show or to purchase balloon flight tickets visit www.PahrumpBalloonFestival.com