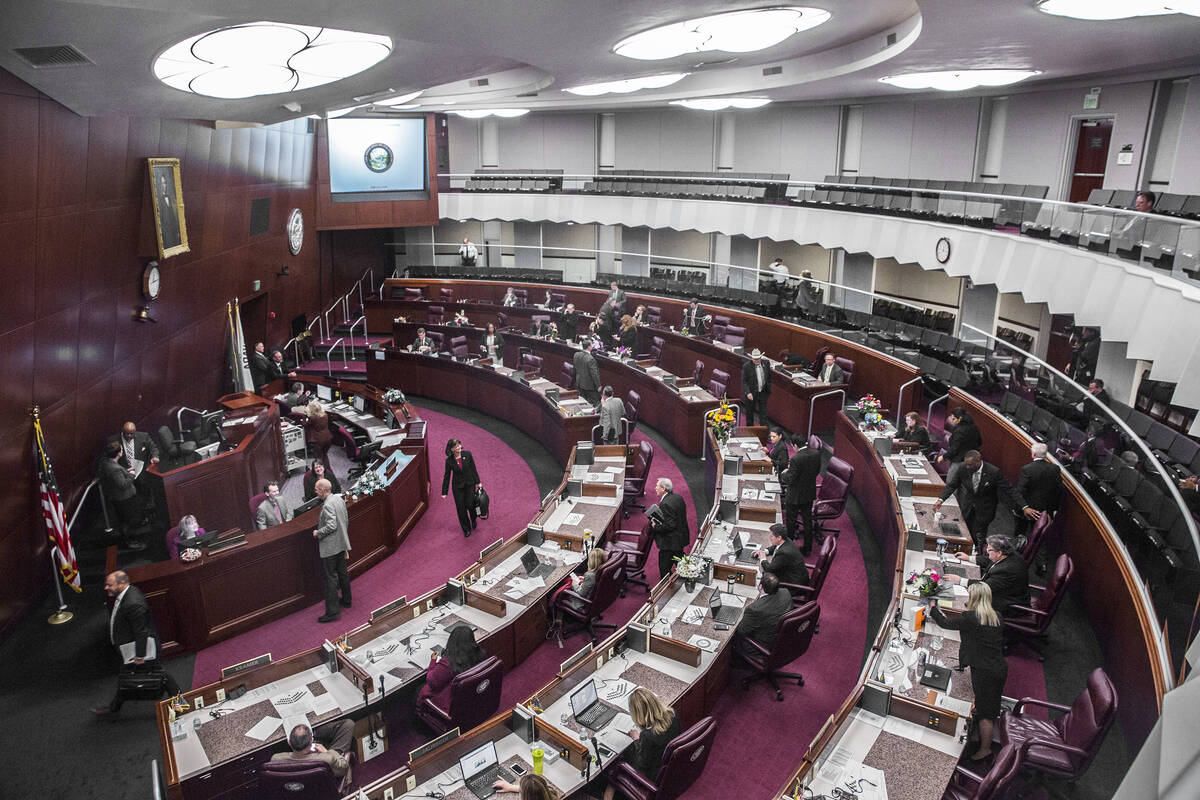 Members of the Assembly file out of chambers. (Benjamin Hager/Las Vegas Review-Journal) @benjaminhphoto 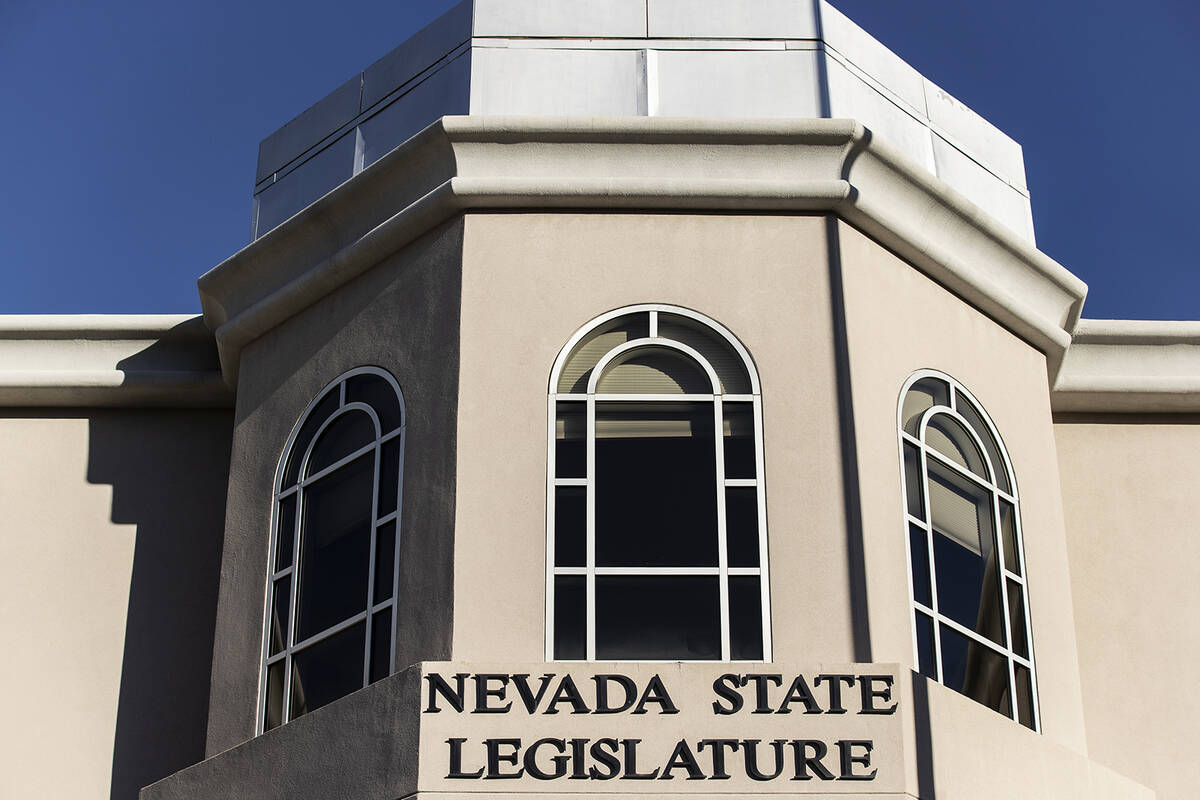 CARSON CITY — Sometime in November, the Nevada Legislature will convene in special session for one purpose — to redraw and approve new boundaries for federal and state legislative districts. It’s a once-in-a-decade exercise that most people are at least nominally aware of, coming after the decennial national census is completed.

What redistricting means for the average citizen might be more elusive. What follows is a primer on the process.

Why should people care?

Because your vote should count as much as your neighbor’s. Nevada’s population is both exploding and evolving, and those changes affect how citizens are represented in government at the state and federal level.

Demographic shifts over the decade mean some districts are wildly out of balance with how they were drawn 10 years ago based on population and racial, ethnic or partisan makeup. Without redistricting, one person’s vote over time could count for more or less than it should relative to the whole.

In addition to redrawing lines, big shifts in population might justify creating new districts, or splitting or consolidating existing ones. Changes in overall racial and ethnic makeup might require redrawing lines to create or preserve majority-minority districts, as is required by law in some cases, or to insure that minority voters are not packed together in one district or spread too thin across several. Both of those practices potentially dilute the voting strength of minority voting blocs and could lead to lawsuits.

So if you want your vote to count as much as anyone else’s — at least on paper — you should care about how the process is conducted.

What are the districts now?

A change in 2011 means that four state board of education seats are elected from within the Congressional districts.

Where (and how) does redistricting start?

With lots of numbers from the census. For starters, between 2010 and 2020, Nevada’s state population increased 404,000, or 15 percent. That’s the fifth highest percentage increase among states (behind Utah, Idaho, Texas and North Dakota, in that order).

The state’s shift from rural to urban continues. City dwellers now represent more than 86 percent of the state total, up two points from a decade ago.

What is the demographic breakdown?

The population of white Nevadans declined for the first time in the 2020 census, and whites were the only racial group to lose overall population, their numbers falling by 11 percent. White Nevadans now represent just over half the state’s population compared with two-thirds a decade ago.

According to census metrics, Nevada is the now the third most diverse state in the country behind Hawaii and California, in that order. Most of that diversity shows in Clark County, which now ranks in the top 1 percent for diversity among 3,143 counties in the U.S.

The state’s ranking is driven by the state’s Hispanic and Latino population, which increased by nearly one-quarter over the decade. The group now represents nearly 29 percent of the state total.

The state saw total voter registration nearly double over the decade, rising 46 percent; now, more than 8 of 10 people 18 or older are registered to vote, up from just under 7 of 10 a decade ago.

While all partisan categories of voters increased, Democrats and Republicans both declined as a share of the total electorate. Democrats comprise roughly 37 percent of the electorate in 2020 compared to nearly 43 percent 10 years ago; respective numbers for Republicans are 32 percent now and 35 percent then. Non-partisan voters increased from 16 percent to 24 percent this year; with others combined increasing by 1 percentage point, to seven percent of the total.

How does redistricting happen?

Nevada’s process of redistricting actually began two years ago with a state legislative committee appointed after the 2019 legislative session. Redistricting was supposed to have been concluded with the 2021 session, but the COVID-19 pandemic delayed completion of the census, thus forcing a postponement at the state level.

A second legislative committee was appointed this year and has just concluded meetings designed to explain the process to the public and gather their input. The governor is expected to call a special session in November but a date has not been announced.

In 2011, then Gov. Brian Sandoval, a Republican, vetoed redistricting plans sent him by the Legislature and declined to call a special session to give the Legislature a do-over. A state judge appointed a three-member panel to draw the lines. The process will undoubtedly be different this year given changes in the political balance of power in the capital.

Ultimately the legislature votes on language that defines the boundaries of the various districts. In the past that has meant bills with long lists of census blocks, but there’s no requirement that it be done that way. Other states simply approve official district maps.

Are there rules governing the process?

Yes — some mandatory, some traditional, some recommended.

The federal requirements for redistricting derive from the Constitution, the Equal Protection clause of the 14th Amendment, and the 1965 Voting Rights Act, which bans discrimination against minority groups. Per the state constitution, districts must be drawn according to population, with the census as the basis, after the latest census is completed.

Nevada received a fourth Congressional seat in 2011 based on population growth; that number doesn’t change this year in spite of the state’s growth. In the state Legislature, the current number of seats is 63. The state constitution allows for up to 75 seats, with Senate seats accounting for not less than one-third nor more than one-half of Assembly seats. The Legislature could opt to increase the number of seats based on population gains.

Per the U.S. Constitution, Congressional district populations must be as close to identical as possible. In 2011, three of Nevada’s districts were, with 675,138 in each; the fourth had just one less voter.

The rules for state districts are different: there is an allowable variance of 10 percent between the largest and smallest districts on either side of the ideal per-district count.

In 2011, redistricting plans drawn by the court-appointed panel produced a population variance of just 1.3 percent among Assembly districts and less than one percent in the Senate.

Traditional principles for redistricting include drawing lines for compactness and contiguity, preserving political subdivisions such as counties, cities and towns; preserving existing communities of common interest and the existing cores of districts; protecting incumbents (i.e., avoiding new lines that pit two or more incumbents against one another); and Voting Rights Act compliance.

Some of these are reflected in standing rules for the Legislature’s redistricting session. The 2019 committee recommended the following rules, which the Legislature may adopt at its discretion:

■ Use a database to prevent contests between or among incumbents and analyze districts for Voting Rights Act compliance.

There are also some emerging principles related to district competitiveness and the use — or avoidance — of partisan data to draw them.

Partisan redistricting, or gerrymandering, could become an issue in this year’s process. A 2019 Supreme Court ruling held that partisan gerrymandering is a political question outside the purview of federal courts to decide. There is no state case in Nevada as of yet but state law is likely to follow federal law, which means that this year’s redistricting plans could be more partisan — with no recourse for intervention by the courts.

What else is different this year?

Democrats now hold the governor’ office as well as both houses of the Legislature, so it’s far less likely we’ll see a governor vetoing whatever plan the Legislature adopts. Beyond that, a law passed in 2019 requires the state to count prison inmates based on their last known residential address prior to incarceration, rather than their prison address. This year that includes about 6,300 prisoners who had a valid pre-incarceration address.

What are some other challenges for Nevada this year?

Part of the regular challenge for Nevada is the state’s extreme population variance — with two population centers (Las Vegas/Clark County and Reno/Washoe County) accounting for nearly nine out of every 10 Nevadans. That drives vast differences in district size. For example: As currently drawn, Senate District 2 in North Las Vegas covers just 16 square miles. Senate District 19 spans the entire eastern half of the state from Idaho to the California border and covers more than 60,000 square miles, an area larger than Georgia and 29 other states.

There have been dramatic population increases within some districts. For example, the population in Assembly District 35 held by Democrat Michelle Gorelow in southwest Las Vegas increased nearly 63 percent. In neighboring District 9 held by Democrat Steve Yeager, the increase was nearly 55 percent. The combined increase alone in the two districts, more than 75,000, exceeds this year’s target population for a single Assembly district — 73,919.

The Legislature also must navigate how to draw districts in a way that does not disadvantage racial or ethnic minorities. The Voting Rights Act prohibits minority vote dilution based on results, not intent — that is, on the outcome, not motive.

Can the public get involved in redistricting?

Indeed. The state has a website where anyone can create a district map with online mapping software. (The instructions are posted there as well.) Users can submit their finished plans for public scrutiny and consideration.