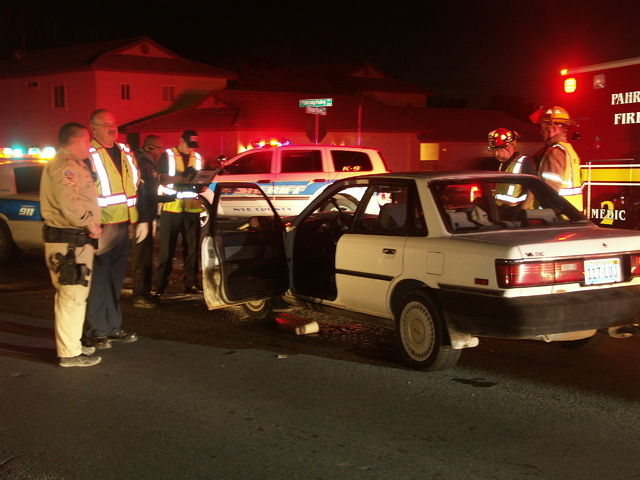 A two-vehicle accident on Monday left a Nye County Sheriff’s deputy with a sore back after he was rear-ended by a motorist along Pahrump Valley Boulevard just after 5 p.m.

Nye County Sheriff’s Lt. Mark Medina said the deputy was attempting to make a left turn onto Bourbon Street when the driver of an early model Toyota sub-compact sedan collided with the deputy’s marked cruiser.

“The deputy had his left turn signal on looking to turn east on Bourbon Street and there were two cars coming up behind him,” Medina said. “The first one made a right turn on Bourbon. The second one, we believe, didn’t notice the stopped patrol car because he was behind another car and he collided with the back of the patrol car.”

The driver, who wanted to remain anonymous, said he did not see the patrol car as his view was hindered by a high-profile vehicle directly in front of him.

“It was a minivan and I reduced my speed so I wouldn’t run into him,” he said. “Once he was out of my way, I increased my speed and looked up and that’s when I noticed the deputy’s car right there. By that time, all I had time to do was hit my brakes but that didn’t stop me enough, which leaves me to believe that my tires aren’t what they should be. I’m just glad no one was hurt.”

Though the accident appeared to be that of a low-speed nature, the damage sustained by both vehicles ‘impact, was vastly different Medina said.

“The deputy complained of some slight back pain. He filled out some paperwork and he was examined by paramedics.”

Additionally, Medina said Nevada Highway Patrol will conduct the investigation to determine whether the driver will be cited.

“Whenever we have an injury or a claim of injury involving an on-duty patrol car, we want to have an outside agency to do the investigation in case there are any civil issues later,” he said. “It takes away the implications that the sheriff’s office investigated their own crash.”