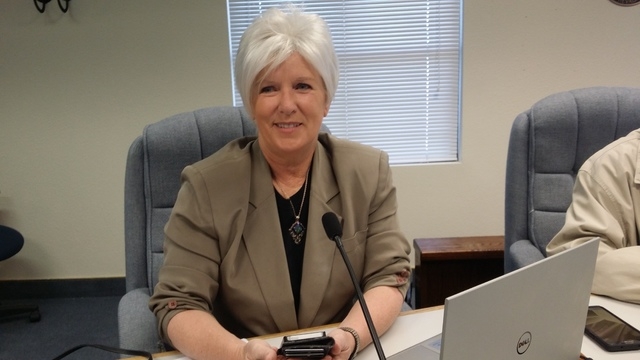 Two-term incumbent Republican Lorinda Wichman faces two GOP challengers in the June 14 primary in the contest for the District I seat on the Nye County Commission.

“We need to have some representation in the north, absolutely,” Wichman of northern Nye County said in citing one reason she’s seeking a third term.

Wichman said that in seeking another four-year term, there is no one else “from the northern part of Nye County who is stepping to the plate, showing an interest.”

Wichman, 58, cited many other factors in her bid for a third term, which would be her last under Nevada’s term-limits law.

“I would term-out after the end of this term so I can only do one more term, and that is not a reason to run,” she said. “But if I had four more years, I could wrap up things we have been working on for eight years.”

“I have projects that are currently being worked on,” she said. “I would like to finish those. I am an effective commissioner. I would like to continue doing that.”

The projects include some public land issues.

“There are protocols that are followed by the BLM and the Forest Service,” she said. “What is currently being worked on are new protocols so that there is more of a cooperative effort with the county. I would like to see that done.”

The issue of reviving medical services at the closed hospital in Tonopah also is on her list.

“That is probably the top of the line right now, but I don’t see that as taking five years,” Wichman said prior to the announcement that a Reno-based telemedicine clinic is coming to Tonopah on June 1.

She noted the size of Nye County as one of the biggest challenges as a county commissioner from District I.

“I’m spending an awful lot of time driving when I really wish I could be working while I’m driving,” she said. “I don’t have a driver. Every hour that you’re behind the wheel of a vehicle, phone calls and conversations you can have intermittently, but you can’t actually sit down and work getting something done.”

The travel time “cuts into the work hours quite a bit,” she added.

Wichman discussed her philosophy as a commissioner in Nye County, where Tonopah is the county seat, and Pahrump is the population center.

“I am elected by District I voters,” she said. “Each of the commissioners are elected within their districts, but once you are elected, you represent the entire county. I do everything I can to assist the four commissioners who live in Pahrump, and for the most part I usually have their help in representing my area, as well.”

“That is how I view it,” she said of being elected by district but representing the entire county. “There are some people who don’t see it that way, but that’s the way I see it. That’s the only way I can get the job done. Nye County is Nye County. Each community is different. Each community has their needs and their own challenges, but we’re all one county.”

Early voting for the primary starts May 28.

“I’ll stand on my record and my platform is the same as it was the first time I ran,” Wichman said. “One of the promises I made to the voters is that I’d return their phone calls, and I’d answer their emails, and I have been pretty darn consistent.”