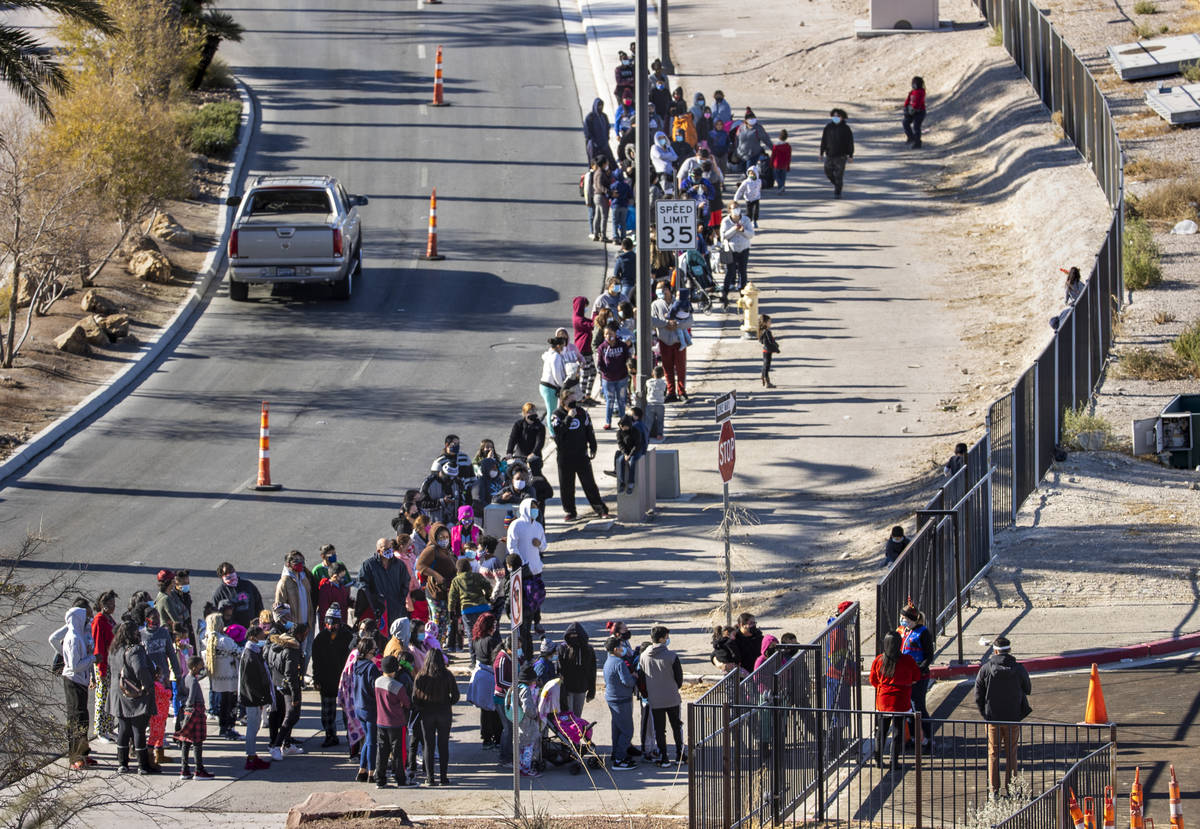 People line up to walk in as the Las Vegas Rescue Mission holds its toy drive on a first-come, first-serve basis in the World Market parking lot due to COVID-19 on Saturday, Dec. 19, 2020, in Las Vegas. (L.E. Baskow/Las Vegas Review-Journal) @Left_Eye_Images

Several unemployment benefit programs expired Saturday since a new stimulus package was not signed into law.

Millions of Americans will see much-needed aid cut off, including about 200,000 Nevadans.

State workforce officials blasted Congressional leaders and President Donald Trump on Christmas Eve for failing to deliver a stimulus package that would have extended jobless benefits.

The Consolidated Appropriations Act, 2021, H.R. 133, passed both houses of Congress on Monday, though President Trump aired grievances of the $900 billion emergency relief package in a tweet.

Both programs expire the day after Christmas.

“These are temporary programs put into place during the pandemic, but they’re set by law to end on Dec. 26,” Andrew Stettner, a senior fellow at the Century Foundation, previously told the Review-Journal. “It’s coming at a very bad time.”

The 5,593-page bill passed by Congress will add 11 weeks of eligibility to the PUA program and 11 weeks to the PEUC program as well. As of Dec. 19, DETR reported 78,922 people are receiving PUA payments while 99,474 are receiving PEUC payments.

Las Vegan Richard Tellier, 67, who filed for the Pandemic Unemployment Assistance program in May, said that he is worried. He hasn’t seen any of that money yet and he has been relying on his Social Security benefits and teacher’s pension while waiting for his claim to be approved. The benefit program is for jobless independent contractors and self-employed workers.

“I’m sitting here with $7.24 in my bank account and I need it to last to the end of the month,” said Tellier, an unemployed substitute teacher.

A study released last month by The Century Foundation, a progressive think tank, found about 12 million Americans around the country will be affected by the expiring aid.

Local nonprofits across Southern Nevada have seen demand surge this year and are bracing for even more.

“We absolutely planned for that need and we will continue to plan accordingly,” Larry Scott, chief operating officer at Three Square, said of the recent stalled stimulus package deal which would extend unemployment benefits. “We realized that we cannot always expect that stimulus funds will be available so we are preparing ourselves to source these foods that will have to make up for that loss of stimulus money.”

Three Square, along with its 150 agency partners that have walk-in pantries, have seen a steady number of food-insecure clients across its locations.

“We’re distributing at 16 drive-thru sites a week, and the demand level remains steady but very, very high. Each site averages between 300 and 350 cars a day,” said Scott. “And, we just don’t see any lessening of demand for an extended period of time.”

The food insecurity rate amongst children in Nevada have jumped to a projected 32.3 percent in 2020, tied for No. 1 with Louisiana, according to an Oct. 30 report from Feeding America, an organization affiliated with Three Square. Just two years ago, Nevada was ranked No. 9, at 19.5 percent for child food insecurity.

“It’s a byproduct of our economy and obviously, it’s a byproduct of an industry concentration,” Scott said of rising food insecurity across Nevada. “When the economy suffers, we have to rise to the occasion. That’s exactly the expectation that we have at Three Square, and that duty is ours.”

The Salvation Army of Southern Nevada saw new families ask for help. The organization has been providing assistance with rental and utility programs offered by Clark County, along with food pantry, homeless shelter, and more.

“So many people have said to us, ‘It’s just hard for me to come and ask for help because I’ve always given, I’ve always donated, and now I need help.’ So we’re seeing that this year in higher numbers,” said Lisa Barnes, captain of the Salvation Army of Southern Nevada.