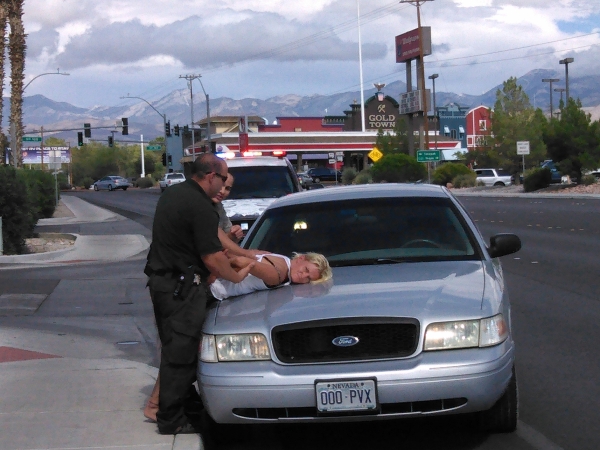 Dilated pupils and a white crusty substance encircling the mouth was enough evidence for police to exact an arrest on a local woman Tuesday afternoon.

The fact that she was also found standing in the middle of the roadway along Highway 372, just west of 160, was also a telltale sign to cops that something was not right.

Racine Marie Owen faces preliminary charges of being under the influence of a controlled substance, resisting arrest and attempted escape by a felon prisoner. She is being held at the Nye County Detention Center on $10,640 bail.

According to Nye County Sheriff’s deputies, Owen attempted to evade them shortly after they made contact with her near the entrance of Bank of America in front of the Pahrump Valley Times office just before 3 p.m.

“I asked the female what her name was, at which time she began to run westbound on State Route 372,” the deputy’s report stated. “Upon detaining the female, I asked her name again and she did not answer my question and attempted to throw yourself at me in an aggressive manner.”

The deputy, according to the report, was able to apply handcuffs and place Owen under arrest but the prisoner became combative again while en route to the Nye County Detention Center, after another officer was summoned to transport the woman.

“I was advised by the transporting officer that the female got out of her handcuffs and was punching the doors and windows attempting to get out of the vehicle,” the deputy stated. “The female was restrained once again and transported to the Nye County Detention Center.”

Once Owen accepted her fate, deputies noted she openly discussed her ongoing battle with illicit drugs after being read her Miranda rights.

“Owen stated that she had used methamphetamine for approximately 16 years and that she smoked methamphetamine the night of September 14th,” the deputy said. “I applied for a telephonic search warrant to collect two whole blood samples from Owen and said warrant was granted at 4:21 p.m. by Judge Jasperson. The sample was collected in my presence and immediately turned over to me to be subsequently booked into evidence.”