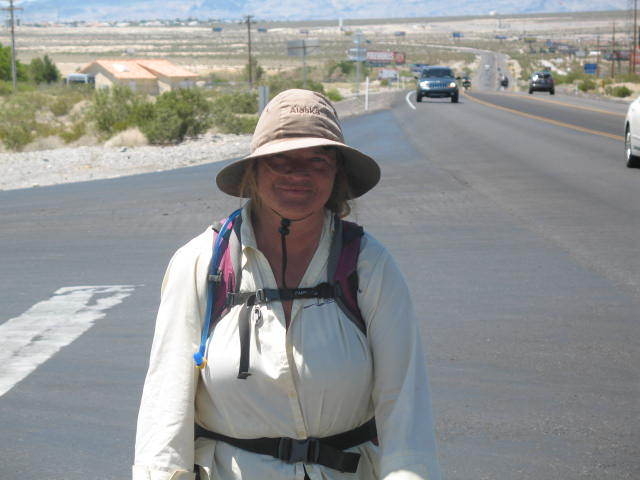 Helen Swanson is on a mission.

In March, the Sausalito, Calif., resident began a cross-country trip in memory of her mother.

Her message is simple but serves two purposes.

Swanson wants to encourage national leaders to promote the full inclusion of women in society, and empower women to become fully engaged both in church and outside.

She said she wants to organize, initiate and support the action to challenge what she believes are oppressive social structures and barriers of prejudice and discrimination against women.

At the same time, Swanson believes women should be afforded all the privileges and responsibilities that men routinely enjoy.

Though cross-country trips to raise awareness for various causes is not uncommon — her means of transportation certainly is.

Swanson, a widow, is walking solo through 15 U.S. states that she says do not recognize the ERA.

More than half are in the south.

Nevada, Arizona and Utah are also in the lot.

She said momentum for passing ERA legislation nationally seemed to wane not long after the passage of the civil rights act.

“In the early 1970s, it was a big movement where everybody was moving forward rapidly in ratifying a state but it started falling behind with some states that were still stuck in the ways of the pre-civil rights movement. They were not progressive, they were racist states,” she said.

Swanson noted that supporters of the ERA at the time miscalculated their efforts by applying deadlines for the passage of the amendment, which essentially doomed it.

“The idea was if they put a time limit for states to come on board, it would light a fire and states would come on board more quickly. Instead it shot it in the foot and the ERA effort died a miserable death. It was considered a dead issue because in order for it to take place again, a whole new amendment would have to be written and all of the states would have to ratify the new ERA,” she said.

Swanson said that those in the 15 non-ratifying states can help support her effort by simply contacting their respective lawmakers.

Swanson began her journey in mid-March from northern California.

She walks roughly 15-to-20 miles a day with little cash and food.

Her provisions consist of a small backpack, a few clothing items and a limited water supply due to its weight.

Though a cell phone is standard equipment, she relies primarily on the kindness of strangers sensitive to her cause.

Local Episcopal churches along the way also play an important role by supporting her in the arduous journey.

As a former resident of southern Nevada, Swanson believes much can get accomplished from those now living in the Silver State.

“I am very familiar with Nevada history and I have found that Nevada is a progressive state that attracts trailblazing pioneers and independent thinking people. Nevada can light this nation’s fire just like they were pivotal in abolishing slavery by being ‘Battle Born.’ Nevada again will show what it means to be a Nevadan by being the state to ratify this in the 21st century,” she said.

Additionally, Swanson is the founder of “Katrina’s Dream.”

The organization was created in the memory of the Rev. Katrina Martha Van Alstyne Welles Swanson who was Swanson’s mother-in-law. She died on the eve of the nation’s worst natural disaster, Hurricane Katrina in 2005.

“Katrina’s Dream utilizes social media to draw those interested in the church where visitors can read, watch, listen and reflect upon contemporary life in a context informed by faith.” Swanson said. “It gives visibility and respect to women’s perspectives and actions in the work and struggle for justice, peace and the integrity of creation.”

Swanson’s ultimate destination on the year-long walk is the nation’s capital where she says rallies will be held to bolster the ERA cause.

She plans to arrive there in March 2015.