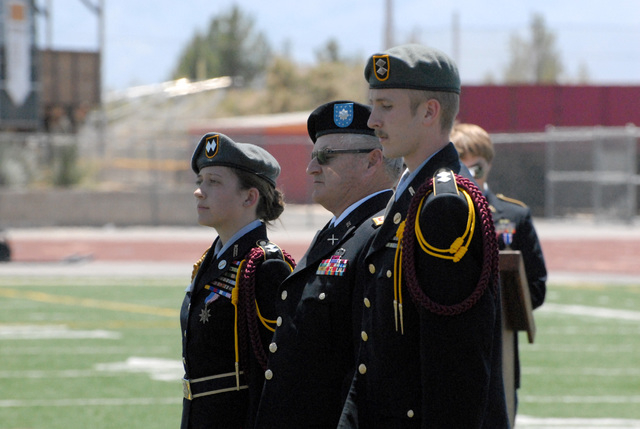 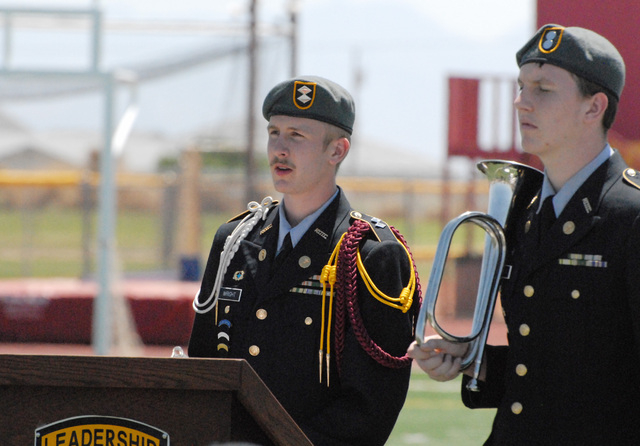 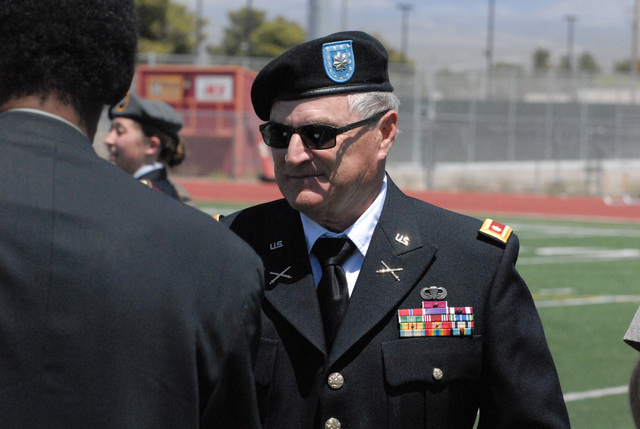 It’s a ritual steeped in tradition and rich in military history.

Change of command ceremonies even predate the Norman conquest of England centuries ago.

Locally, the ceremony played out yet again on a much smaller scale — Pahrump Valley High School.

Members of the school’s Jr. ROTC program carried on the formal, symbolic passing of responsibility, authority, and accountability of command from one leader to another.

Additionally, the ceremony provides the outgoing leader an opportunity to bid farewell to those who have been under his or her command, and for the new commanding officer to meet personnel.

On Friday, the program mustered on the football field where outgoing Battalion Commander senior Hannah Lane transferred her authority to underclassman Tanis Wright.

During her speech, Lane spoke about her ROTC experience from the past four years.

“It’s been one of the top rewarding experiences of my life. Thanks in part to the ROTC program, I achieved good grades, ran in cross country and I had the wonderful experience of attending the Junior Cadet Leadership Camp. I didn’t know much about the program but Cadet LTC Herberto Pinion was the BC my freshman year, and he inspired me to work to become BC,” she said.

Upon graduation, Lane said she plans to continue her education out of state.

The daughter of District Judge Robert Lane, Hannah says she is weighing her options as far as her studies.

“In September I’m going to BYU Idaho and major in biochemistry. I’m thinking of becoming a dental surgeon but I really don’t know for sure yet. Until then I’m going to be staying home during the summer and helping my dad with the election,” she said.

Lane also has not ruled out a career in the military.

“It all depends because I applied for an ROTC scholarship but I haven’t heard back yet. But if I got it, definitely for sure. I applied to the Army and Navy. I like the Army but the Navy is cool too,” she said.

The doting dad spoke of his daughter’s commitment to her future as well as his other offspring who have since left the family’s nest.

“I’m very proud; we love her very much and we’re very honored that she was able to serve as the battalion commander. Now she has to head off to school and hopefully achieve great things. They were all toddlers when I was first elected judge. Spencer was born three days after I was elected. Now Spencer is going for his eagle scout and they are all leaving the nest. It’s very sad. I don’t really like getting old and losing my toddlers but life goes on and I’m looking forward to the grandchildren,” he said.

Incoming Commander Tanis Wright, meanwhile, spoke of his commitment to continuing the high standards of the school’s ROTC program.

“As we say goodbye to the old leadership, we of course look forward to the new ones. As the new commander, I hope to further the organization as far as I can. I hope to make the Jr. ROTC Cadets shining examples in the community, in conduct, academics, and leadership, that we can proclaim proudly the name of the Trojan battalion here and abroad. We pledge allegiance to one nation under God, in the same way our founding fathers built a new nation under God. I will lead this battalion in the same way, under God,” Wright said.

The new commander also had some parting words for Col. James Hein, who is retiring after five years of leading the ROTC program.

“It is with a heavy heart that we say farewell to LTC. Hein, Lane and the seniors. To think what I have become accustomed to, will never happen again saddens me. Time moves on in its own incomprehensible pace, but it is not for us to understand. So, that is what I hope for, but I pray that God’s will, not my own, be done,” he said.

Hein, meanwhile, said he too is saddened to break ranks with his future leaders.

“I always get that lump in my throat when it’s time to do these change of commands because I go way back to when I did it, but it was a lot of fun. My last day here is graduation day June 6,” he said.

Hein served more than 25 years in the Army. He plans to move to Kansas with his wife later this year.