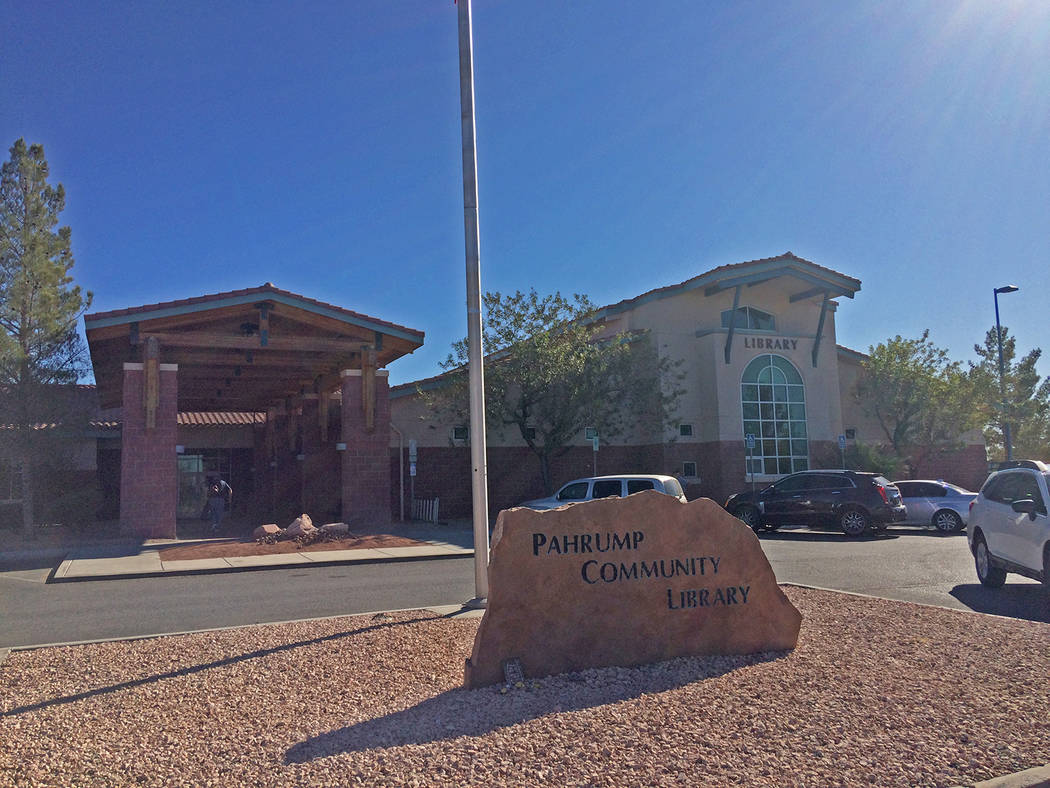 Robin Hebrock/Pahrump Valley Times The Pahrump Community Library is located at 701 East Street in Pahrump. A large crowd turned out for the Pahrump Library board's Jan. 13 meeting to speak against a proposal to ban guns in the story room, an item that was pulled from the agenda that morning. 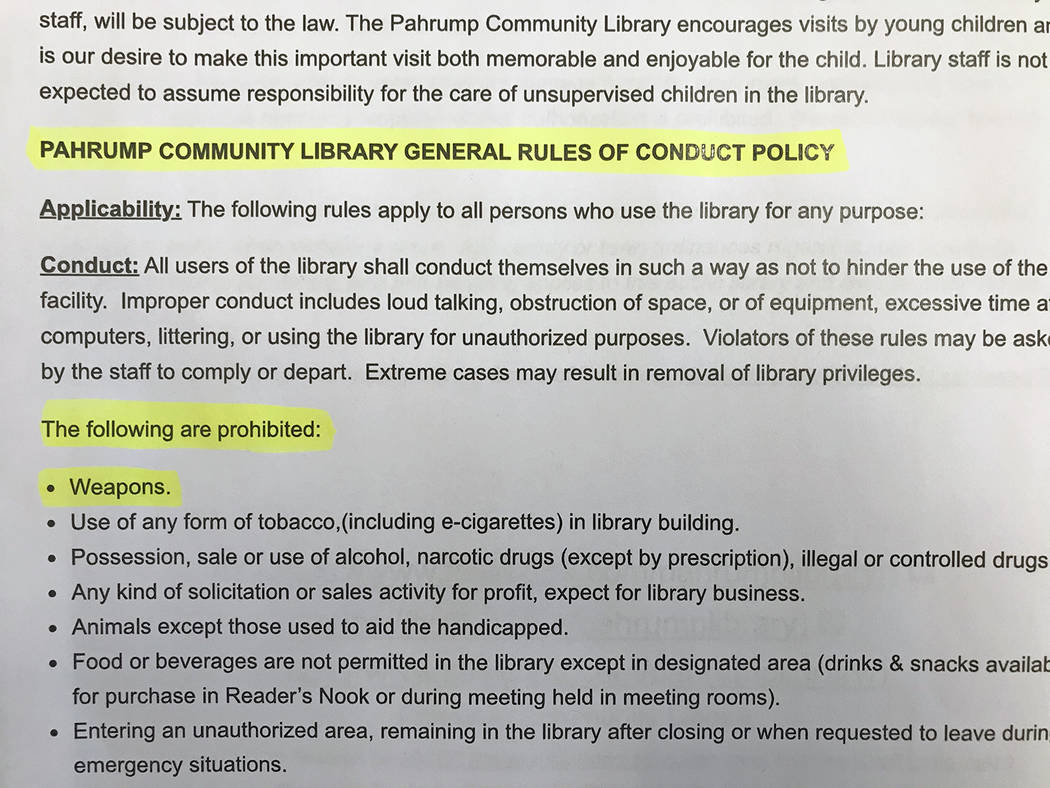 Robin Hebrock/Pahrump Valley Times The Pahrump Community Library's general rules of conduct policy already prohibits "weapons" from being carried at the library, a policy that has been in place for years, according to the document. 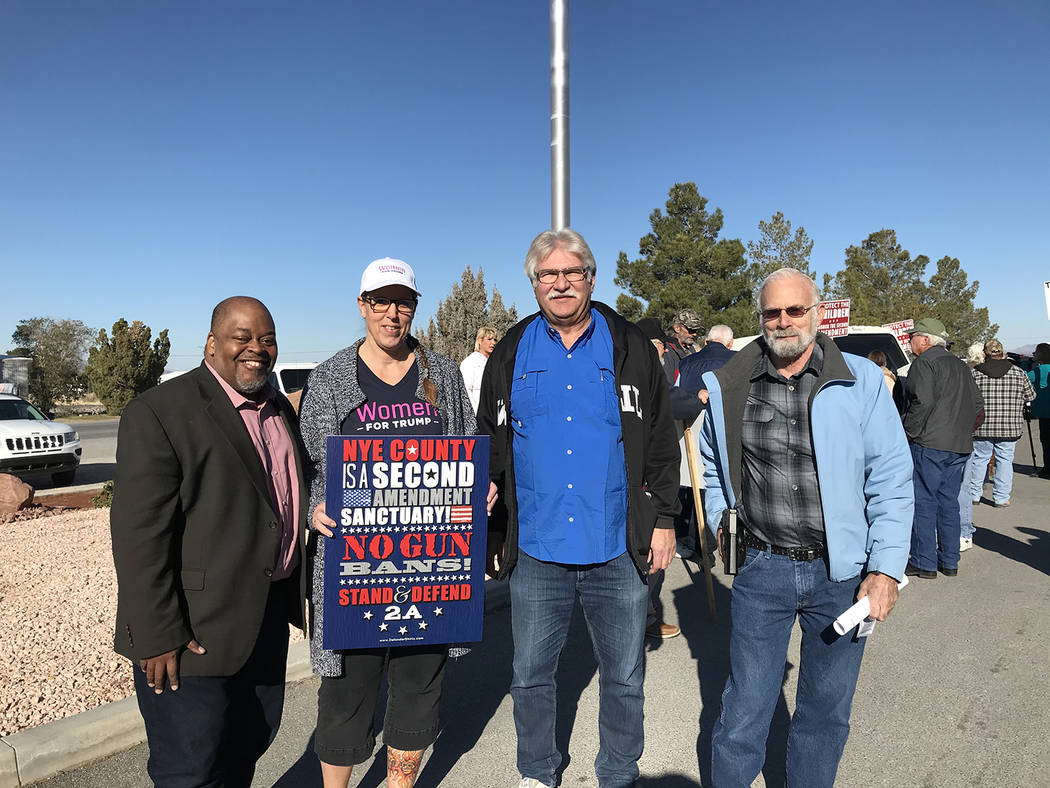 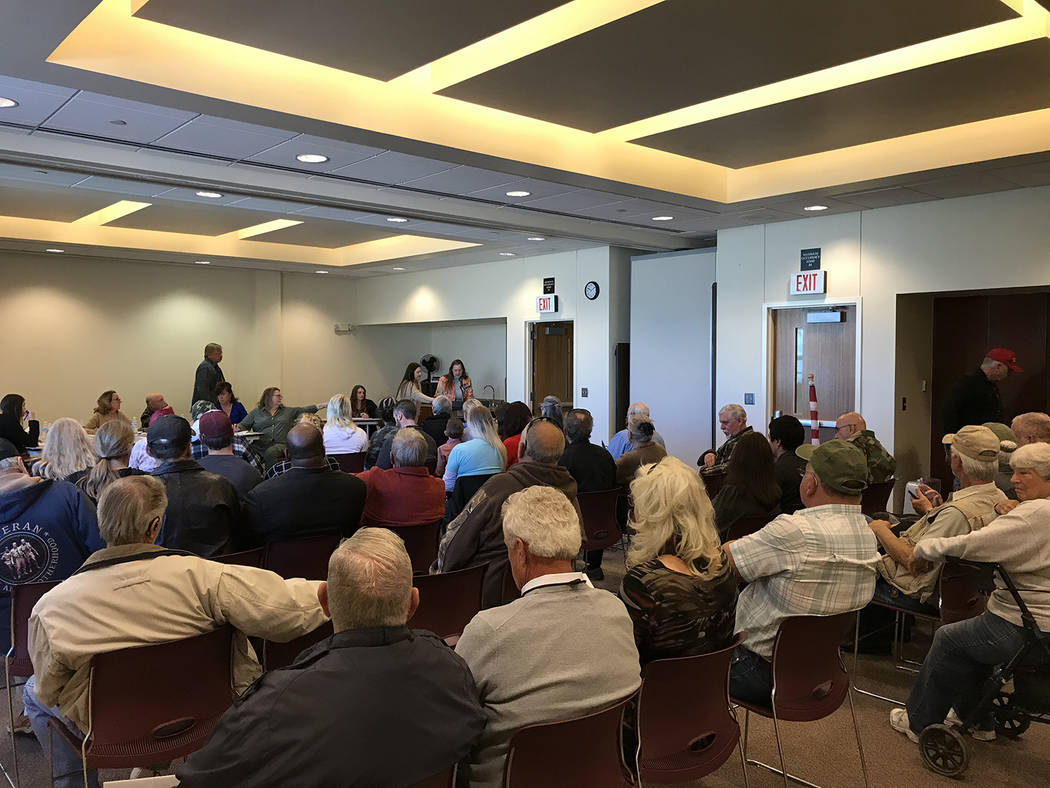 Robin Hebrock/Pahrump Valley Times A large crowd turned out for the Pahrump Library board's Jan. 13 meeting to speak against a proposal to ban guns in the story room, an item that was pulled from the agenda that morning. Apparently, the library policy already prohibits guns on premise, a policy that has not been enforced. The recent movement on the subject is meant to clarify the library's policy, library board members explained.

For the last four months, the local community has been agitating about a possible ban on firearms in the story room at the Pahrump Community Library. But according to the library’s general rules of conduct policy, “weapons” have been forbidden at the library as a whole for many years.

That policy, however, has obviously gone unenforced, with library patrons regularly spotted carrying sidearms while browsing the books or utilizing other library resources. The situation has created extensive confusion among members of the public, many of whom are unaware of the policy as it stands today.

As a result, when the Pahrump Community Library Board of Trustees held its regular meeting on Monday, Jan. 13 with an agenda item addressing the potential story room gun ban, the Nye County Republican Central Committee was once again out in front of the library with picket signs to protest the proposal.

At that rally, Nye County Republican Central Committee Chairman Joe Burdzinski announced that Nye County Commission Chairman John Koenig had informed him that the library board would be pulling the gun ban item. The reason, Koenig explained, was the same as why it was pulled from the December 2019 agenda, the item was not worded specifically enough, creating a potential open meeting law violation.

Despite the item being pulled, the library board allowed meeting attendees to speak their piece during public comment. Speakers included many of the same people who had spoken on the issue at a December 2019 meeting, and their statements had not changed. Staunchly backing their Second Amendment right to bear arms, speakers condemned the idea of restricting guns from any part of the library, with several reiterating that “gun-free zones” are often targets for those intent on doing harm to others.

When the meeting was adjourned, the Pahrump Valley Times questioned the board as to why it was aiming to address an issue that is apparently already covered by the existing library policy.

Library board chairman Carlton McCaslin said there had been no problems until recently, when a complaint was made regarding someone carrying a firearm while attending the library’s Baby Time program. With the subject brought to the forefront, the library board is now attempting to delineate exactly what its rules and regulations are, board members told the Pahrump Valley Times.

One part of the problem is that “weapons” are not defined within the library board’s bylaws, meaning an agenda item is needed in order to clarify, through an open discussion at a public meeting, what the intent of the policy is.

With the library agenda item only targeted at restricting guns from the story room, where children’s programs are conducted, one library staff member pointed out that the move would actually loosen the restrictions as they currently exist, rather than creating brand new restrictions as many in the community have thought.

As for future action on the subject, McCaslin said he is still in the process of determining the extent of the library board’s authority in such a matter. He also noted that he is not certain whether the item will ever make its way back onto an agenda.

Those interested in the situation will need to keep an eye out for the agenda for the library board’s next meeting, set for 10 a.m. on Monday, Feb. 10 at the library, 701 East St.

Agendas are always posted three working days prior to the meetings and can be found online at www.pahrumplibrary.org and at three public notice posting sites, including the library, the Nye County School District’s office and the Nye County courthouse.