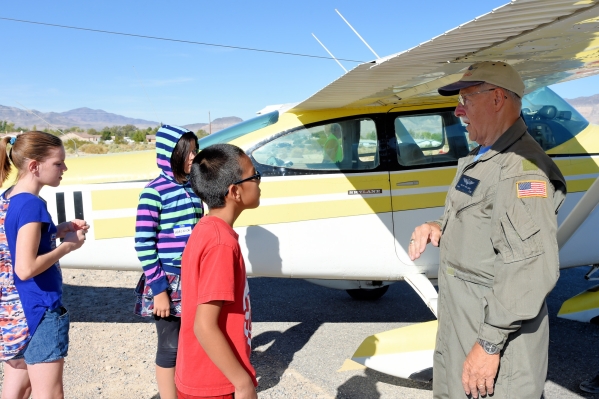 Local kids can experience the joy of flight as the Experimental Aircraft Association’s Young Eagles flights return to the Calvada Meadows Airpark on Saturday.

The free rides are limited to youth age 8 to 17 years old.

She and her husband have been pilots since the early 1970s.

“The flights last about 20 minutes in the air, but it will have a lot to do with the weather on Saturday,” she said. “If the wind picks up too much, we will have to cancel the event, but it’s usually pretty calm in the morning.”

Wagner said she’s uncertain how many pilots will participate in the event, while noting most will be flying in from the Las Vegas area.

“There could be anywhere from five to eight airplanes and pilots coming in,” she said. “It depends upon the pilot and if they are available on Saturday. They usually fly in from North Las Vegas, Boulder City and as far as Laughlin. We do have one local pilot here who is thinking about going up but we won’t know until Saturday.”

Wagner said each year Pahrump’s Chapter 1160 of the Experimental Aircraft Association, in partnership with Henderson’s EAA Chapter 1300, hosts the flights.

She noted the event averages roughly 50 kids who take to the skies, but there may be more this year.

“We did have an airplane in the fall festival parade this year and all the kids saw it so we might have more as a result of that because the kids seemed very excited,” she said. “We never know how many kids are coming or how many pilots are going to show up until the day of the event. We just hope the wind doesn’t come up to the point where we have to cancel it.”

Saturday’s weather forecast calls for sunny skies and highs in the low 90’s, with south, southeast winds at 7 miles per hour, gusting up to 12 miles per hour.

“That’s not going to be a problem and much of that is up to the individual pilots,” she said.

Since 1992, EAA pilots across the country provided almost two million flights to kids interested in the science of aviation.

Wagner said the program is now in more than 90 countries.

“The national program began back in the early 90’s and there’s probably three and a half to four million kids that have been flown over the years,” she said. “Kids that are at least 15 years of age can get a student pilot permit if they are really interested in flying, where the instructor will be in the airplane with the student.”

Calvada Meadows Airpark is located at the corner of north Highway 160 and Simkins Road.

“It will be on the north end of the runway and we will have a big sign out there pointing to where we will be,” Wagner said.