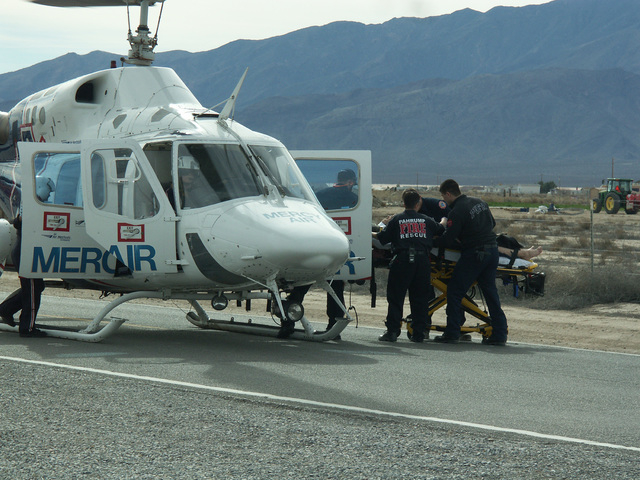 A juvenile female was air-lifted to University Medical Center in Las Vegas after falling from the horse she was riding Tuesday afternoon.

Pahrump Valley Fire and Rescue crews responded to a residence on Homestead Road where the accident took place just before noon. Traffic was blocked on the road on the south end of town for nearly an hour.

“The exact address was unknown because it was an off-road equestrian accident,” Lewis said. “The actual location of the patient eluded us for a while because we were getting several different reports, but they were in different locations along Homestead.”

Once emergency crews were able to determine where the accident occurred, Lewis said crews had to travel a good distance offroad in order to reach the victim.

“Our regular sized ambulances couldn’t go back in that particular area so we special requested one of our four-wheel drive squad units and additional manpower to the scene,” he said. “Once the crews had access to the patient, it was determined that the injuries were consistent with the requirements for flight. Once Mercy Air made their approach, landed and the patient transfer was completed we reopened the roadway.”

Traffic along the far end of Homestead Road was at a standstill while crews prepared the patient for transport to University Medical Center Trauma in Las Vegas.

The condition of the rider remained unknown by press time on Tuesday.