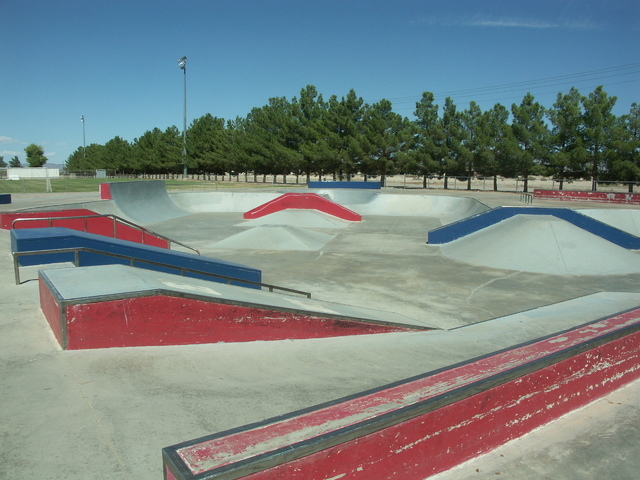 Members of the Pahrump Youth Advisory Board (PYAB) want to shed some light on the skate park area of Ian Deutch Memorial Park.

The board met this month to discuss ideas on how to bring lighting to local skaters who use the park at night.

There are presently field lights for soccer and softball players who take to the park after the sun sets, but there are some in the community who feel skaters are being left in the dark.

As with most endeavors, money determines when and if a project can commence.

Local resident Larry Fenton is volunteering his time with the project.

Fenton said the first step requires obtaining the services of a qualified exterior lighting expert who is willing to work pro bono.

“We are still in the stage of finding an engineer to give the town his stamp of approval on how the lights are going to be set up, the angle, and how tall they need to be. We want to make sure the town is happy with it and the engineers would have to donate their time,” he said.

Additionally, Fenton said he’s aware of the present circumstances the town is faced with in terms of finances and self-determination, which is why the advisory board is looking for ways to take the initiative on the project.

“The bottom is we don’t want the town to pay for anything. We are asking for people to donate their time. At the appropriate time, we also plan to have some fundraisers in the future,” he said.

This week, Waters said though the project will take some time to come to fruition, he believes a solution will eventually present itself.

“I wouldn’t say that we are a long way from achieving the goal but it will take some community involvement. They are looking to acquire lighting that doesn’t require electrical power. They are looking at using solar lighting, but it’s got to be good lights so they just won’t walk away at night,” he said.

Waters also said the town’s buildings and grounds department supervisor, Matt Luis, is also advising on the project – albeit, with limited support.

“He is working with us to make sure that we get something that is going to be beneficial for the kids. Again, it’s going to take community involvement because it’s really going to take some money, and it’s not going to come from the town or the county. There seems to be enough interest, so installing lighting at the park, I think would be fantastic,” Waters said.

With zero financial support from the town and county, Fenton, said at least one local retailer has offered to lend support.

“Home Depot has been very helpful when I first initiated this, trying to look for the poles and lights. They were leading me in the right direction and I was told by one of the managers that the managers have agreed to donate their time to do the work to put in the lights, but the first thing we need right now is the engineer,” he said.

Fenton said when local teens have a venue to meet and socialize, it benefits the entire community.

“In a small town, kids with idle time seem to do things that they shouldn’t be doing. If we give them an opportunity to do something at night that they love to do, without getting into trouble, that’s a positive for the town. There is just not enough things for kids to do at night in Pahrump. If they want to go bowling here, they have to walk through a casino and seeing how much fun it is to drink at a bar. They have plenty of time for that later in life,” he said.

PYAB Co-Liaison Diane Southworth said she loves the idea of the lighting proposal, but agreed that it’s not something that will happen within the next few months.

“We are still a long way from getting that done. It a wonderful idea for the kids to have something to do in town that’s positive. It’s going to take a lot of work, but I don’t see it happening anytime soon,” she said.

The Pahrump Youth Advisory Board will revisit the lighting issue during their next meeting on Wednesday August 27.