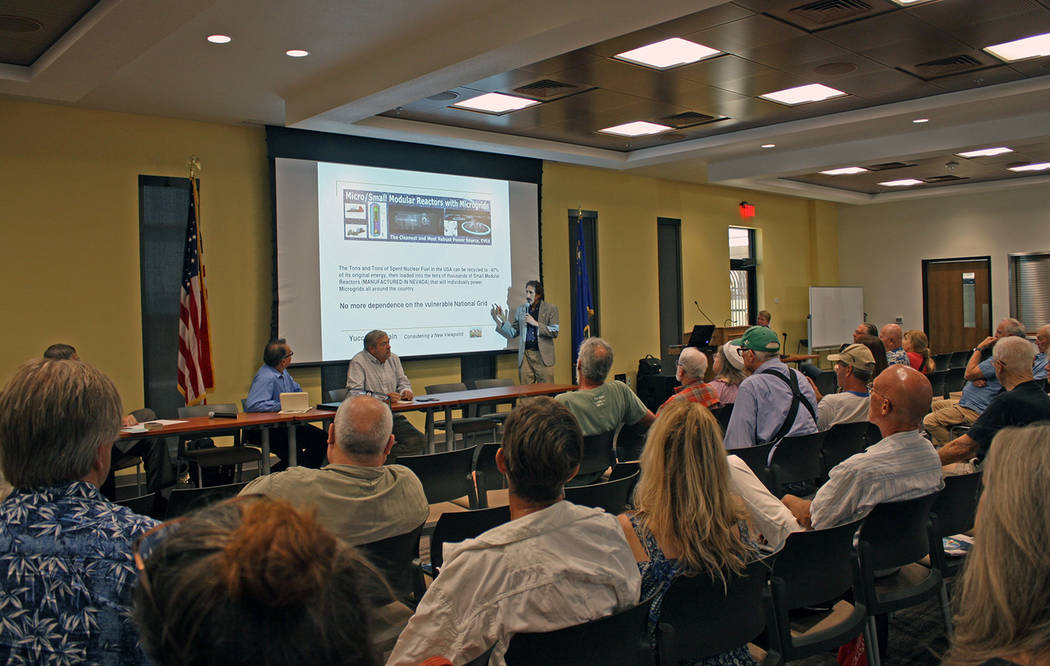 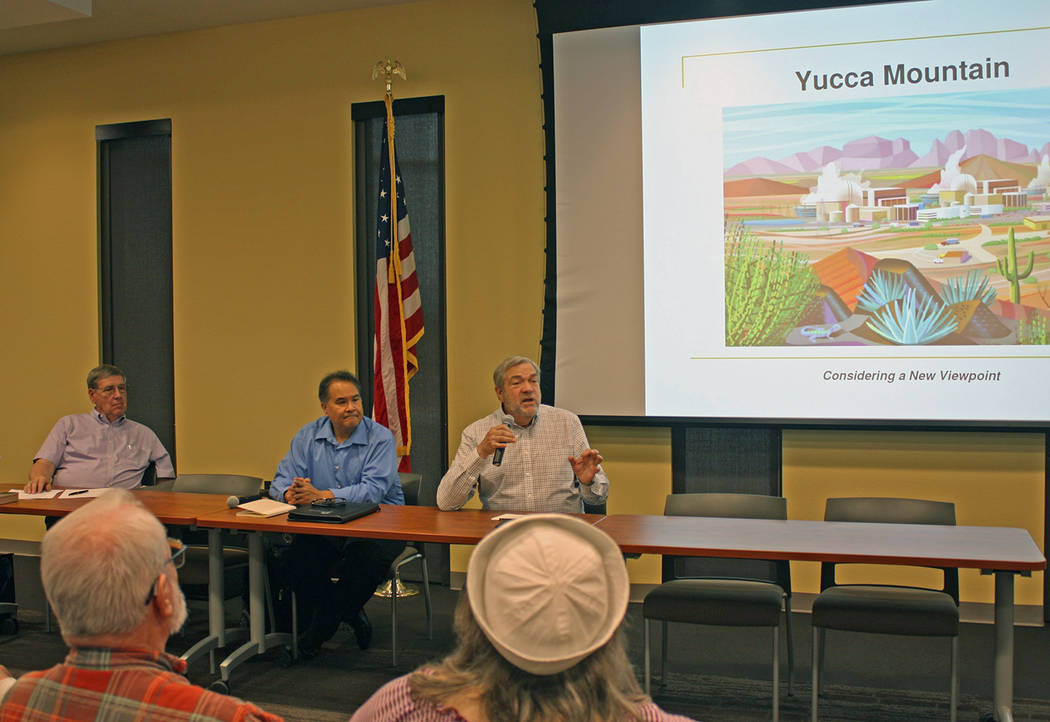 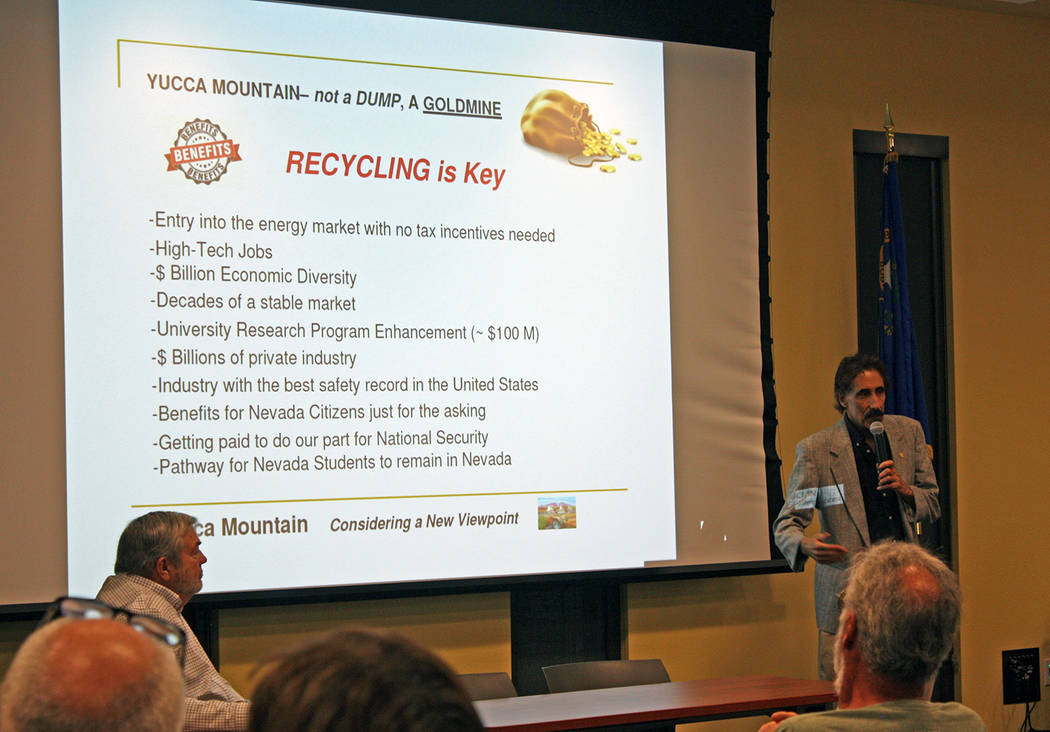 Robin Hebrock/Pahrump Valley Times Marty Waldman details a page of his presentation on the new viewpoint for Yucca Mountain. 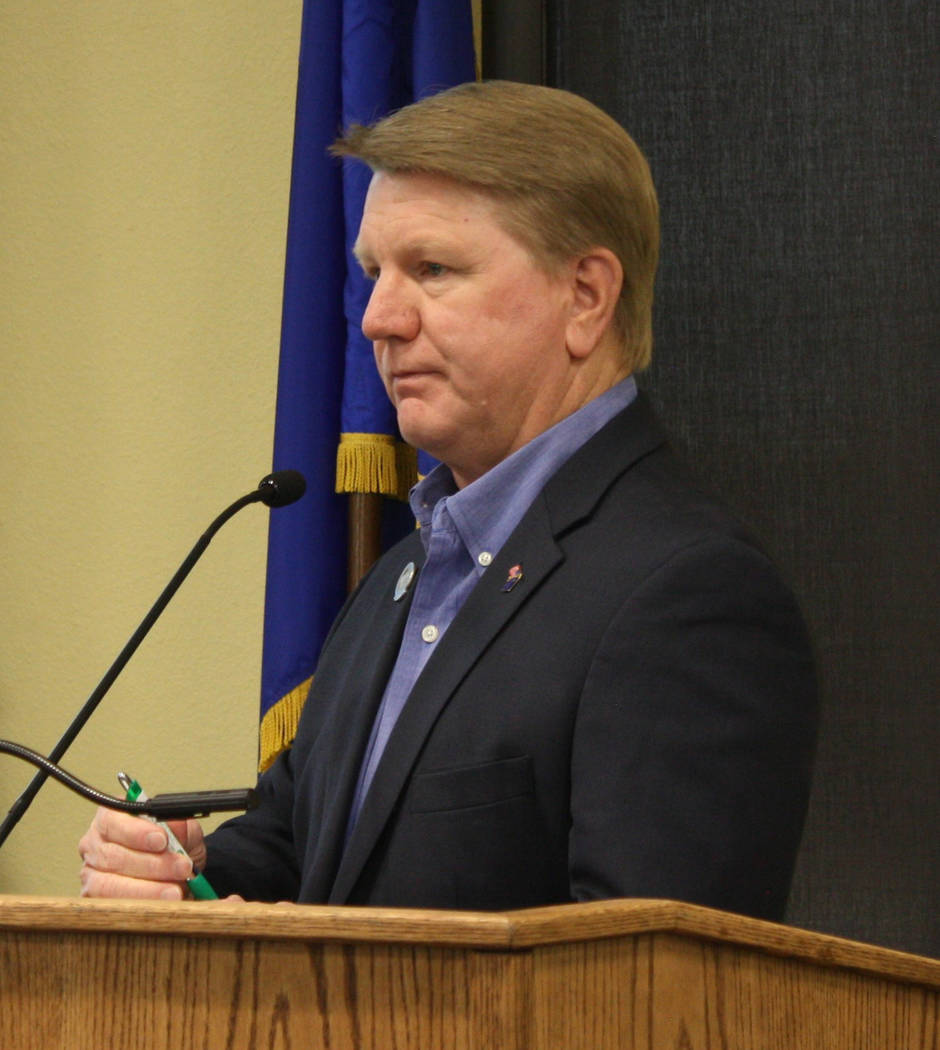 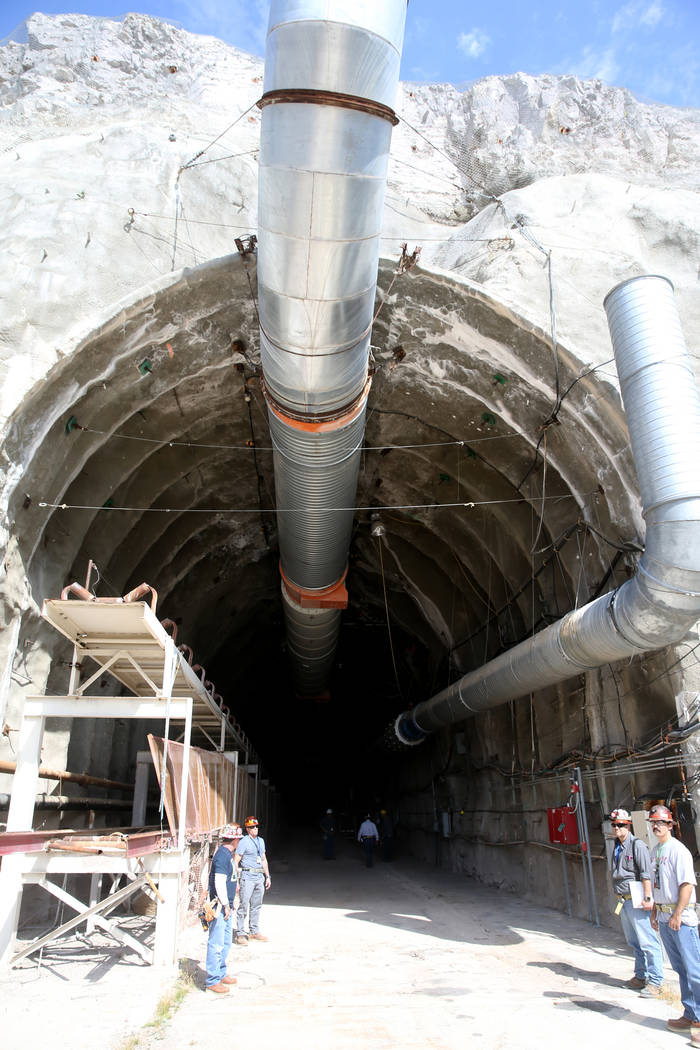 The north portal to a five mile tunnel in Yucca Mountain as shown during a tour in May 2019. (K.M. Cannon/Las Vegas Review-Journal) @KMCannonPhoto

Former Nevada Assemblyman and Nevada Congressional District 4 Republican candidate Jim Marchant hosted a forum on Yucca Mountain on July 30 in Pahrump, bringing several nuclear professionals and experts to discuss a re-branding of sorts on the project.

Marchant and the panel of speakers placed heavy emphasis on eliminating the pubic concept of the site as a “waste dump” and instead, said they envision it more as a launchpad into what could be a “lucrative industry” in the future, the manufacturing of Small Modular Reactors.

Marchant started off the discussion by explaining that he and many others were working together to propose an alternative to a permanent dump at Yucca Mountain.

“So we went to Congressman (Mark) Amodei, R-Nevada, and said ‘OK, why don’t we negotiate for a recycling facility here and a world-class Livermore-type lab that will research and develop all of the carbon-free energy, wind, solar, hydro, whatever the future brings us… including the new small modular reactors,’” Marchant told the audience of several dozen attendees.

Smith, who made sure to note his comments were reflective of his personal opinion and not those of the Naval Post Graduate School at which he is a research professor of physics, said one of the benefits of such a proposal would be a reduction in the levels of radioactive waste.

“Under this recycling idea, the components of spent nuclear fuel would be separated out and those constituents that drive the very long time frames of concern would not be considered waste, it would be considered fuel for advanced reactors that are currently under development. So the residual material, instead of it being items that have a 25,000-year half-life for example, or even longer, we are talking about materials that have like a 30-year half-life. Much more manageable,” Smith stated.

Another benefit would be the ability to create microgrids across the country, eliminating dependence on the vulnerable national grid, the panel agreed, and Nevada could play an integral role in the microgrid build-out by manufacturing the small modular reactors that would power those systems.

This is turn would bolster economic development, they contended, and drive job creation in the state as well.

Moreover, the panel said the fact that the federal government has not acted to provide a storage site for the spent nuclear fuel that is currently stored at nuclear facilities all around the U.S. has created a large financial penalty to the tune of $2.2 million per day, the burden of which is being borne by taxpayers.

If Yucca Mountain were to be opened, that would no longer be the case, they asserted.

Marchant provided a cost estimate of roughly $40 billion to build both a recycling center for the waste and a high-tech research lab, noting that there was a federal fund that has been accumulating monies that could potentially be used to leverage for that purpose.

Moving into other concerns regularly voiced about Yucca Mountain and with recent seismic activity in the area, earthquakes were brought to the forefront.

“Am I worried about an earthquake affecting either a repository or a recycling facility? No,” said Fraass, who holds a Masters Degree in Nuclear Engineering and is a retired director of the National Center for Radiation Field Operations as well as the National Air and Radiation Environmental Laboratory.

He declared he would be more concerned about being in a store with hazardous chemicals on the shelves when an earthquake struck than any possible effect on stored nuclear waste.

Smith added that contrary to what many thought, the well-known Fukushima nuclear accident was not caused by an earthquake but rather, by the tsunami that followed.

On water concerns, Fraass noted, “The water table out there (Yucca Mountain site) is called a perched water table. The water table that exists does not connect to other water tables in the area. So we are not going to see an issue with that.”

The three-hour meeting included much more information as well, along with a PowerPoint presentation by Waldman, who works with the National Defense Industrial Association.

A portion of the presentation underscored the message the panel was trying to get across, reading, “The tons and tons of spent nuclear fuel in the USA can be recycled to (approximately) 97% of its original energy, then loaded into the tens of thousands of small modular reactors (manufactured in Nevada) that will individually power microgrids all around the country.”

Marchant said the ultimate goal in holding the forum was to educate people and hopefully change the minds of some who are against Yucca Mountain altogether. While this was successful for some, others, however, did not budge in their thoughts.

Pahrump resident Dwight Lilly for one remained dubious in his view of the situation.

Another unidentified audience member, on the other hand, said she was swayed by the forum.

“As a NIMBY myself, not in my backyard, with selective hearing… I just wanted to say that I am opposite of that now because I did get the knowledge and I did go down the path of truth and what’s real, with experts,” the woman stated.

As for Marchant himself, he said he was pleased with the event. “The turnout was amazing and everybody was engaged. After the event, a lot of people gave me very positive feedback about our presentation and what they were able to learn,” he said. “Having the world-renowned nuclear scientists there to personally answer questions was key to the whole event. The attendees were able to ask their questions directly to experts that absolutely know the facts.”