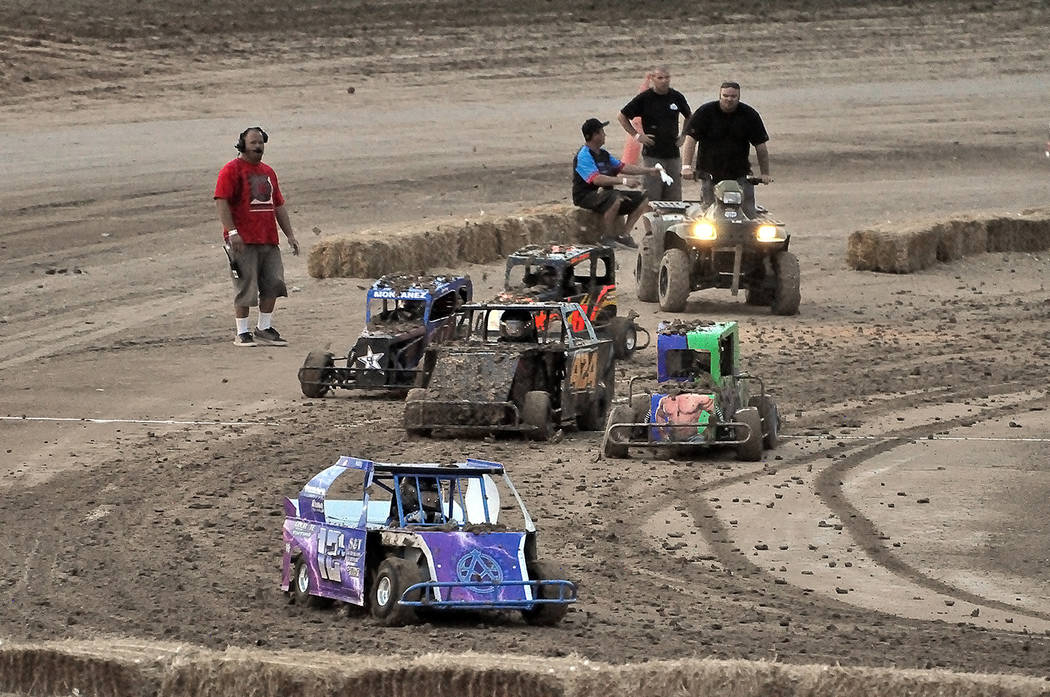 Horace Langford Jr./Pahrump Valley Times Being in the lead means getting your car a lot less muddy on the infield track at Pahrump Valley Speedway during the monthly races of the Southern Nevada Mini Dwarfs. 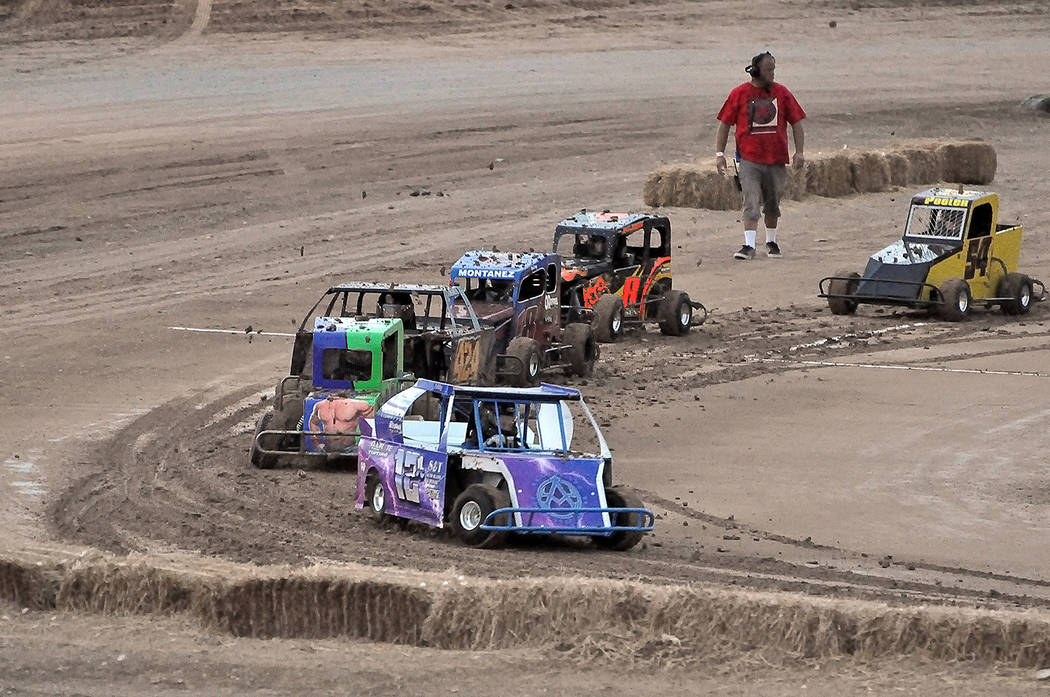 “On the turns, you slow down … then you floor it,” he explained. “On the straightaways you go to the outside, then inside, outside, inside.”

Makes sense. That’s just how it works on the 215 beltway. Except Montanez races in the junior division, made up of drivers ages 5 to 9, in the Southern Nevada Mini Dwarfs.

And he’s successful at it, too. While his grandfather can explain the mechanical details, Montanez just knows when it all came together for him.

“We bought the car from Jason Pike,” he said. Pike and his son, Jake, have been very successful at the speedway. “When we got the new motor, we started winning all the races. I won the last five in a row.”

Make it six. On Saturday night, Montanez beat out Jace Jensen and Shaw Pooler for another juniors victory.

But a hot streak is not unusual. According to race coordinator Dusty Park, there is something almost democratic about success at this level.

Park has been involved in racing for two and a half years, while the mini dwarfs are going on four years at the speedway. They’re a crowd-pleaser, he said, and in the earlier days he said you could see the place clear out after the kids were done. Now, he says, more people stick around to enjoy the races.

“When they all come there will be six to eight in each group, beginners, juniors, seniors,” Park said. “And there are others who are just not ready yet. They have to do two practices before they can race, and even then we may say they need another one. We don’t want to throw anybody to the wolves.”

To that end, adults make sure the kids are ready before they hit the track.

“When we first start with these kids, we teach them everything,” Park explained. “They know what’s going on for the most part.”

Part of that is heredity. It seems as if almost everyone in the pit area has a relative — or several — in the pit area, and that goes for the kids as well. Joshua Slusher is related to the Pikes. Kayne Horibe got into it through his father. Addy Murphy’s family is scattered all over the speedway’s points standings. And Park has two kids who race.

Kohlzin Park took some jabs from other drivers because his sister, Kyler, beats him.

“She beat me once,” Kohlzin Park said firmly. “And that was the final race of the year two years ago. Most of the time I get top three.”

Murphy was late getting to a birthday party Saturday night because she didn’t want to miss her race.

“I like going fast,” said Murphy, coming up on her eighth birthday. “I got first place once, second place a couple of times and third place a lot of times. Two more first places and we go up to the juniors.”

Murphy is easy to spot in the purple car No. 12, named Thunder Girl.

“That’s the car’s name,” she said rather emphatically. “Not mine.”

Horibe has a simple reason for wanting to race.

“I just like driving a car,” he said, not long before he won the seniors race. “I’m pretty good. I can’t say I’m the best, because they can beat me. It’s all about your driving and how the track is.”

Which doesn’t mean you can’t have some fun.

“You get to wreck into people,” Slusher said about why he enjoys racing, the laugh giving him away. “You get to drive, you get to get dirty, and you don’t have to run.”

All good reasons for most kids, but it was Kohlzin Park who provided the most basic reason for going out to the speedway once a month: “Hanging out with my friends.”