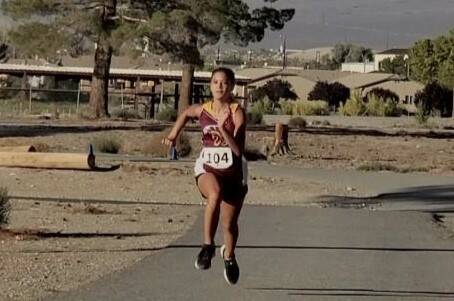 Whitney came in first place in the womens event for the Trojans. She finished the 5,000-meter race with a time of 22 minutes and 34 seconds.

This was her second win in a row after taking first place in the 5,000-meter Small Schools event during the Coaches Association Invitational on Saturday, Oct. 15.

Whitney ended that race with a time of 22 minutes and 46 seconds.

In Tuesday’s race, Savannah Thompson had a fifth-place finish in the womens event for the Trojans. She ran a time of 26 minutes and 21 seconds.

During the mens race, Pahrump Valley finished with three runners inside the top 10.

Freshman Aydon Veloz finished in sixth place with a time of 19 minutes and 44.4 seconds.

Junior Theron Abbiss and freshman Timothy Stutzman also finished in the top 10 for the Trojans.

The regular season is coming to an end for the cross-country season. The Nevada southern regionals are set to take place next Friday, Oct. 28, at Veterans’ Memorial Park in Boulder City.

This event will have the 2A, 3A, 4A and 5A classes competing.

The top four teams and the top seven individual runners will qualify for the Nevada state cross-country competition taking place on Saturday, Nov. 5 back at Veterans’ Memorial Park.