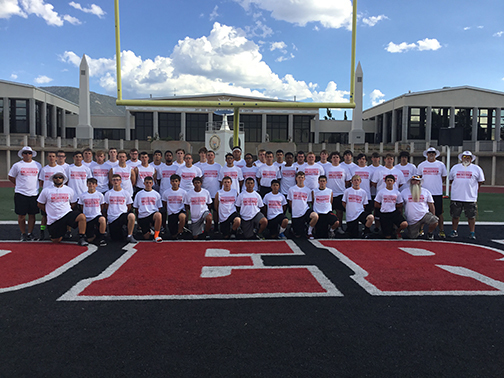 Special to the Pahrump Valley Times The 2016 Trojans football team at the Southern Utah University football camp at the end of June. 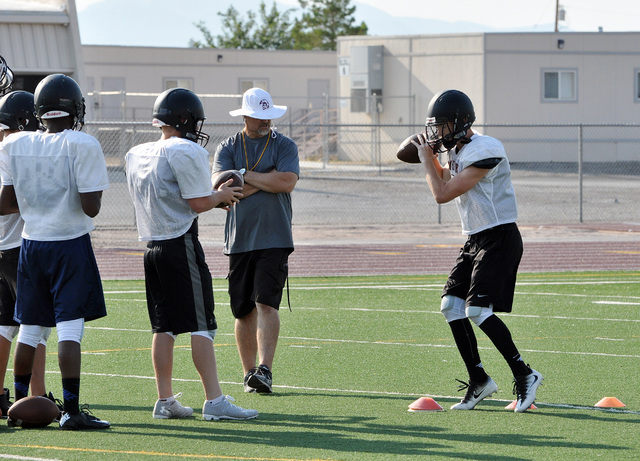 The return of Trojans coach Joe Clayton to the gridiron means the return of the running game for the football program.

Clayton brings back the jet sweep offense, which features several fastbacks going at the defense from the wide out (wide receiver) position.

Last years team, under Adam Gent, depended on the spread offense based on Tony Franklins version and the team passed more.

In the jet sweep, the QB gives the ball to a wide out in motion, who is running parallel to the line of scrimmage. The QB takes the snap right before the wide out reaches him and he puts the ball into the receivers belly. He then will fake the ball to the running back. The back will run in the opposite direction of the ball. This option package is designed to keep the linebackers and corners guessing which direction the ball is headed.

Clayton liked the jet sweep because of its simplicity to learn, but at the same time he felt the motion packages were complex enough to keep other teams off-balance.

Under Joe Clayton as head coach, the Trojans didnt have a winning record. He was 9-19, but he was headed in the right direction. Prior to Clayton, Pahrump Valley had two wins in five years and 13 wins in an 8-year span.

Our league has changed slightly and I believe for the better, the coach said. Desert Pines and Cheyenne will be tough, however beatable, and the parity in our league is as balanced as it has ever been, which makes Friday nights in the fall even more exciting. Go Trojans!

Based on last years stats, Desert Pines should be the favorite in the Sunset League to take the division. The Jaguars had an undefeated season going but had to forfeit two games for playing an ineligible player at the end of the season. They then beat Cheyenne in the playoffs, but lost to Moapa Valley. Cheyenne and Mojave should also be at the top. The Desert Shields finished second to Faith Lutheran last year and Mojave was the third place team.

The Trojans just returned from the Southern Utah University football camp held during the last week in June. The camp gave the team the chance to evaluate personnel at the various positions as well as giving the players the opportunity to compete and reinforce their offensive and defensive systems.

We had a great week at SUU camp, Clayton said. With the purpose of being there to evaluate what we have as personnel, we reached our camp goals.We faced some of the toughest competition at the camp to date against some of the most well-established football programs from all over Utah and Southern Nevada. As a staff, we now know our strengths and weaknesses.

The coach feels that he has a great group of juniors and seniors this year and loves the groups toughness.

The Seniors are a very tight-knit group that play well together and I think that will be important when we get into the season, he said. I am extremely excited to see what these young men can do. They are a hard-nosed, tough, tenacious group and they work as hard as any group I have coached yet.

The Trojans need to replace QB TJ Milk, who graduated last year. At the moment, Clayton is having a little bit of a competition between senior Parker Hart and junior Dylan Coffman to see who will make first string.

It will be exciting to see who steps out on top in the weeks to come, Clayton said.

Hart played under Clayton his freshman and sophomore years and is familiar with the jet sweep.

I threw the ball for the junior varsity team the year that Joe Clayton left, Hart said.

The offense has the following personnel competing for positions: Jesse Dillon, Drew Walker, Nick Redmond, David Roundy, Joey Sladek getting reps at wingback and Dee Brown and Nico Velasquez are a couple of sophomores stepping up. At fullback, Case Murphy, Aaron Fuentes, Dee Brown, and Nico Velasquez. We are also solid at tight end with Danny Kinkade, Riley Sutton and Corey Bergan leading the way.

Everyone knows that we run the rock and these linemen will get it done for us this year, also a tough, solid group, the coach said.