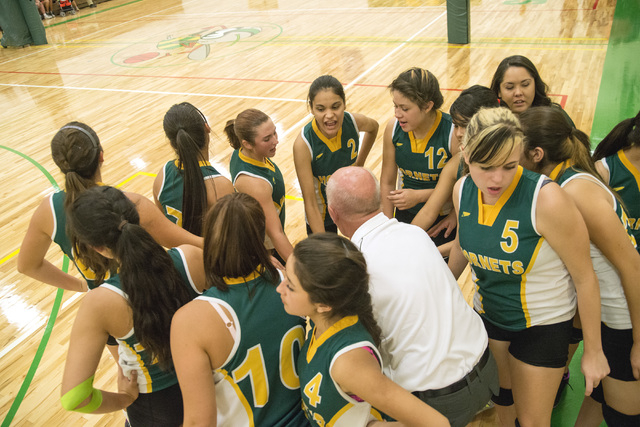 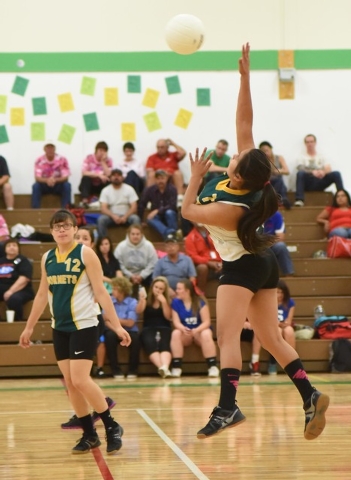 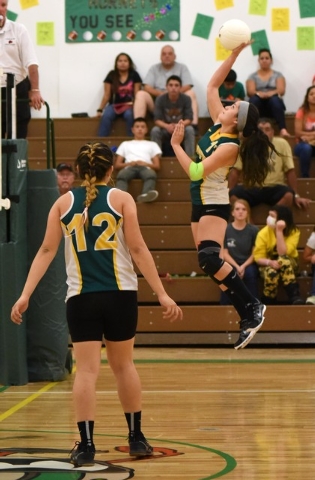 Beatty volleyball is going to state. The Hornets are on their way to Reno this Friday to play in their first state tourney since 1998. The last time Beatty won state was in 1993.

Hornets Coach Dale Lerbakken said his team had the ability to beat Sandy Valley all along.

“It’s a mindset I try to instill in these girls because all my starters are sophomores and juniors,” Lerbakken said. “We always had this kind of feeling too. This crew is different and they are very motivated and they really love playing volleyball. The girls are all physically athletic. That is the right combination to have at a small high school when you have that many talented girls.”

He said his team was not going to lose. They were motivated and the team has been that way for the past month.

“We have our down times too, but during this last month we played Tonopah and Indian Springs and the girls really concentrated and beat them,” he said.

One of the keys to beating Sandy Valley was the Beatty defense.

“Defense has been spotless,” he said. “I had girls falling all over the ball last Saturday.”

Lerbakken said starter Denise Gonzalez was playing really hard that game and got hurt in the first match second game. She fell on the floor and hurt her shoulder. This did not slow the Hornets down.

“The girls I put in knew what to do,” he said. “The girls know where to go and where to be. Our defense has really gotten so much better.”

Gonzalez should be fine for the state tourney.

After Beatty beat Sandy Valley, they had 15 minutes to rest before playing Pahranagat Valley for the Division IV Southern Regional Championship. The girls lost in 3, 25-17, 25-8 and 25-10. “My girls took an early lead in the first game but just didn’t have the legs to compete with them,” he said. “We played five games and then we had to play right after that (I will say now because we will be the No. 1 team in the state) the No.2 team. That team had three easy sets against Beaver Dam.”

Lerbakken was at Beatty High School when the girls last won state in volleyball. He said his team is similar to that team but a lot younger. His team is mainly made up of sophomores and juniors.

“I expect mistakes because my girls are not as mature yet,” Lerbakken said. “They try to do things and don’t always follow through with them. We only had one game that was bad this month and that was Sandy Valley. I knew we could beat them because when they don’t move their feet that is not an indication of their talent. My girls were tired and I think the long bus rides hurt us.”

Beatty was undefeated at home this year. The coach now has to motivate his team to overcome the bus ride of the year.

The team will make the 400-mile trip to Reno on Friday morning, which they think will take 7 hours. They play that evening at 8 p.m. at Wooster High School.

“I think we should be OK with this bus ride because every team has to travel there,” he said. “We will take it easy on the way up and rest when we get there. The girls are really pumped now and motivated.”

Lerbakken said Alamo may be the team to beat. They have a very consistent team and the history and heritage behind them. Panthers Coach Ginger Whipple has over 32 years’ of experience and has won 16 state championships.

The girls go up against Smith Valley on Friday at 8 p.m. The game will be at Wooster High School.