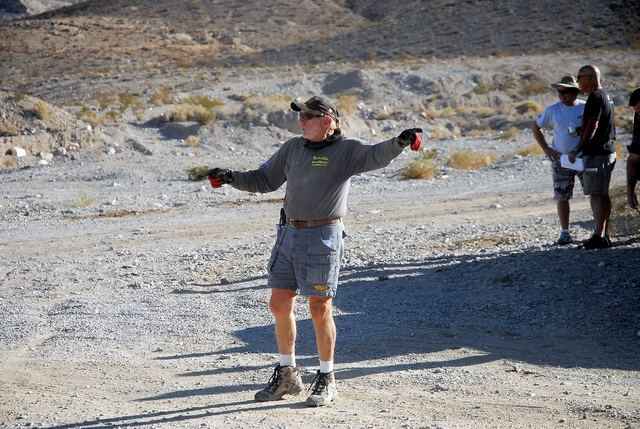 Casey Folks is seen at Beatty before the start of the 2013 Vegas to Reno Race directing traffic. Folks was always a part of every aspect of the race and nothing was beneath him. Folks passed away on Jan. 12 of a massive stroke. Horace Langford Jr. / Pahrump Valley Times

The Best in the Desert Racing Association finds itself having to move on quickly after the passing of its leader, Casey Folks, on Jan. 12.

The funeral and celebration of his life have yet to be announced, but the association had to choose a new leader with the Parker 425 in Arizona less than a month away.

BITD operations manager Donald Jackson has been placed in charge of race management and supervision.

“Donald was extremely close to Casey and has been his second in command for 13 years,” the organization said in a statement. “He knows exactly how Casey would have handled anything.”

“This exceptional, highly-skilled and dedicated crew has been together for years, helping Casey put on the most successful desert races ever run,” the association said. “Plus, Best In The Desert is fortunate to have a great group of experienced and enthusiastic volunteers for each race.”

Best in the Desert put any doubts about continuing with its 2017 schedule to rest through a press release.

“As Casey would have wanted, Best In The Desert is forging ahead with scheduled 2017 events and developing plans for the 2018 season,” the association announced on Monday.

The family of Folks said Jackson has the full support of the entire BITD team.

For some racers who had been racing under Folks for a long time, there were no doubts that the events would survive.

“He was a pioneer of his sport and did quite a bit of things that most people couldn’t do,” off-road racer Jason Coleman said. “Everything is on schedule and I don’t think there will be any great changes. Events like this are not just one person doing everything. It’s not a one-man operation.”

“Casey touched everybody in the off-road racing world, 99 percent in a good way,” off-road racer Pat McCarthy said. “BITD will continue, which is a great thing. I know we can never replace Casey, but I believe his team will continue to keep his legacy alive, and am looking forward to another great season.”

The first test will be the first race on Feb. 2-5 at Bluewater Resort &Casino in Parker. The Vegas to Reno event is scheduled for Aug. 16-19, and Pahrump Nugget 250 is scheduled for Nov. 30 through Dec. 3.

It is much too early to say how the later races, like Vegas to Reno or even the Pahrump 250 will be affected by his passing.

The association said there will be a private ceremony for the family, but the family is planning a celebration of Casey’s life.

“It will be sometime after the Parker 425 race,” BITD spokesman Russ Turner said. “I have not yet been given the date, time or location. I will update you as soon as I hear.”