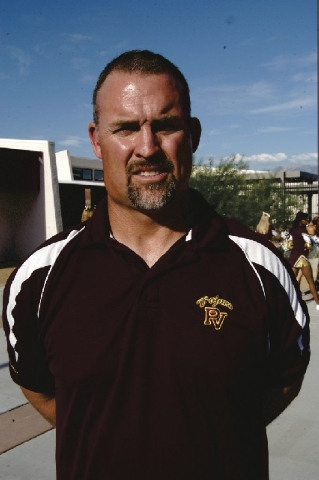 The 2013 football schedule is out. The Trojans face the same opponents in league play. The only thing that changes is whether or not they play at home or away.

This year in league the Trojans face Clark, Faith Lutheran and Mojave at home. Western and Cheyenne will be away.

“We don’t have any input at all. I shouldn’t say that, I have a tiny bit of input,” he said. “Right at the end of the season they will throw an email out there and say, ‘Is there anybody you absolutely don’t want to play?’ They keep it limited on what you can say. In our case, we actually told them we did not care to play Moapa because we have a good possibility of facing them in the playoffs again.”

Clayton said there was a miscommunication this year between he and Chris Brockman, the athletic administrator. Brockman ended up canceling the game with Virgin Valley because it was the farthest travel distance. He didn’t realize this year’s game would have been at home. This means the team will play Moapa, and this game is away.

Football schedules, explained Clayton, are really taken out of the coaches’ hands.

“If we wanted to play a non-league game, we can’t put that in our schedule. We are the only Nye County team. The Clark County School District makes our schedule. We take the schedule and like it basically, which is kind of unfortunate,” concluded Clayton.

The Trojans are in full pads starting on August 15. They will have five home games out of nine games this year.

All games are played at 7 p.m.

The Trojans are in full pads on August 15.