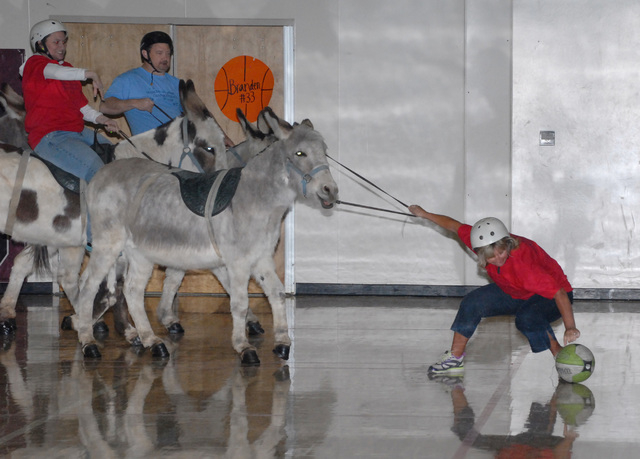 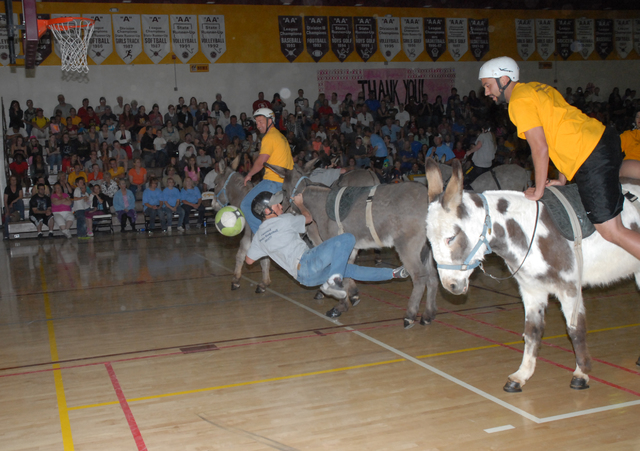 Rosemary Clarke Middle School just reported that local drug stores are running low on liniment and pain killers. Yes, the pucker factor just went up as an influx of asses are scheduled to come to town as Pahrump prepares for the second annual upcoming Donkey Basketball Game.

In the game, people ride the donkeys and try to shoot a basketball into a hoop, hence the name donkey basketball. The game has been around for ages and is popular with schools as a fundraiser. The basic rules for donkey basketball are simple. Each team has five players. Four of those players are mounted on donkeys. The two un-mounted players are centers and are forbidden from leaving center court. The only time they can leave is when the other team scores. At that time, the centers can throw the ball to a mounted teammate.

The idea to bring Donkey basketball to town is the brainchild of Principal Tim Wombaker at Rosemary Clarke.

“When I was teaching up north at Silver Springs, I was the athletic director/coach. It was a small community like Amargosa. I was an elementary schoolteacher and we did it up there. It was a huge success and a ton of fun.

“It got the community involved, and everyone came out. The donkeys packed the gym. It was a great time. I came out here, and we talked about doing it out here,” Wombaker said.

“The money raised will go into a school activity account,” said Wombaker, “and we will be splitting the profits with the high school.”

Wombaker said the kids have responded to the rewards program.

“The Nugget Bowl second quarter rewards were a huge success with 605 students attending this year, compared to 492 last year. To qualify for a reward trip students must not have any discipline records, failing grades or excessive truancies. Our big reward trip is at the end of the year when students get an entire day at Treasures RV Resort for bowling, swimming, movies and lunch. We also offer prizes for CRT Testing. Our reward/incentive system is definitely paying off for us as we see improvements in attendance, grades and discipline,” he said.

Wombaker believes he is bringing the community together for some fun with the donkey basketball. Last year he said it was not about winning, but all about being there to raise money for the kids.

“It is not all about us collecting the money, it is about getting everyone out and having a good time. We wanted to get the community involved a bit, so we tried to get some businesses and some elementary schools involved. The middle school has a team, the high school has a team, there is a high school student team. It will bring all entities, family members, fellow students to watch. All four elementary schools will combine to have a team too,” he said.

Advance tickets will go on sale Feb. 24 at Rosemary Clarke Middle School, Pahrump Valley High School and Floyd Elementary School. Advance ticket prices are $8 for adults, $6 for students 7th-12th grade, $4 for children K-6th grade, preschoolers are free. Tickets at the door (if any remaining) will be $9, $7 and $5.