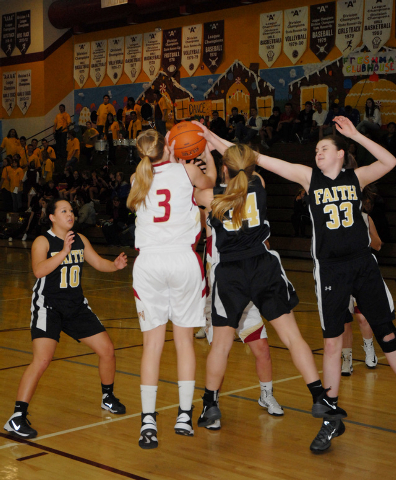 There has been a lot of talk about changes coming to the 1-A because of the recent fall success of Faith Lutheran High School. The school captured its first state titles in volleyball and football.

There are some coaches in the league that want Faith out but more than likely Faith will be staying. On Feb. 27 the Nevada Interscholastic Activities Association will have a meeting to determine this.

According to NIAA Assistant Director Donnie Nelson, Faith Lutheran has a choice to go to Division 1 or stay in Division 1-A.

“There are four schools that have the option based on the previous alignment that says they could make decisions whether they want to participate in Division 1 or 1-A regardless of their rubric totals,” he said.

For the rest of the schools, there is no other option. The 1-A Division has a rubric which determines if a school stays or leaves. This is the case for Pahrump and eight other schools. Nelson said that if Pahrump Valley’s point totals ever exceeded the threshold and they were one of the top one or two schools then they would find themselves back in Division 1.

Coaches know that Faith Lutheran is over that threshold and this is why they think Faith will be leaving, but they probably forget that they have a choice.

So despite what the coaches in Division 1-A are feeling about Faith Lutheran, the bottom line is Faith will determine on Feb. 27 whether they stay or go.

Nelson said he really has no clue at this point on how Faith feels. According to Nelson, the 1-A is being reviewed because it is assumed to be a two-year program. It is in writing but this can be interpreted in different ways.

“We don’t know at this point if they want to go. If they have decided that they don’t want to go, then they can stay per the agreement that was created,” Nelson said.

He said up to this point there has been talk saying they will move and he strongly disagreed with this notion.

“No one would have said something like that from this school. At this point, our official stance is that we have not made a decision. We have been contacted by the NIAA who was just wondering what we are thinking. It is our choice in the realignment process and we have 800 students at the school,” Walters said.

Walters was asked if it were his decision to make, what would he do. He replied with, “My understanding from talking to the people at Faith is we would like to evaluate our programs for another two years and then see where we are at. The school has plans to grow; will that work out? I don’t know. The overall feeling for me right now is Faith doesn’t have any indication that they want to move up. An official decision will be made in February. We have had our discussion as a school and everyone is on the same page as I am.”

Walters made reference to the recent state titles and pointed out despite the win in football his school had no freshman team. They also did not have lower level girls soccer teams in the fall.

He knows football in Division 1 takes a lot out of a program and did not think his school was ready to go back to that.

“We have a lot of perspective because we did play in the 4-A for 3 years. We know what it was like on our football program. People can say what they want about other sports, but the physicalness of football is, as you all know in Pahrump, tough on programs. We are trying to build like everybody else,” he said. “Certainly we think we have a few programs that can compete at that level but we also have programs that are just working hard. We believe the 1-A to be very competitive and we were lucky to win the games we did.”

Walters did conclude that the meeting on the 27th was a realignment meeting and anything could happen, meaning a discussion on the future of the division would be explored.