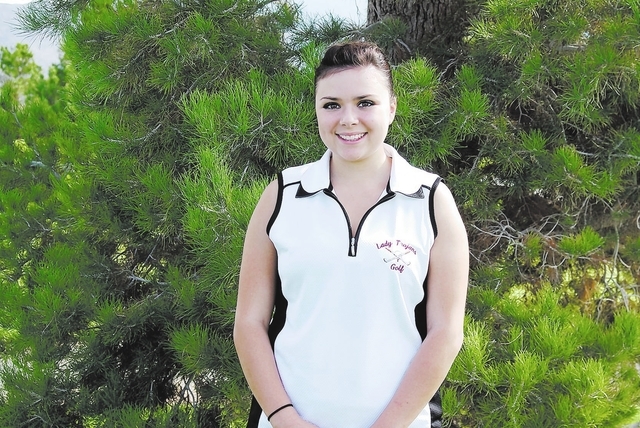 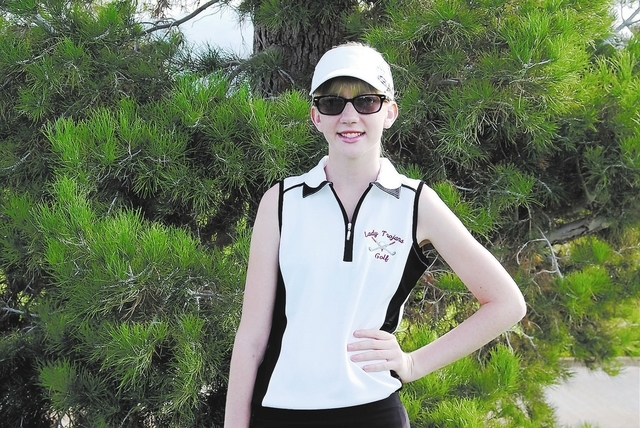 Last week the girls golf team was at Las Vegas Municipal and on Monday they were at Angel Park Golf Course. According to Trojans Coach Julie Floyd, the team did very well, and is improving each game. The girls came in third place each time but the scores got a little better at each match.

The two golfers that have dramatically upped their scores are freshman Riley Moore and sophomore Courtney Berry going from the 120 range and down under 100. Previously at Mountain Falls Moore shot a 115 and Berry shot a 123. In golf, shooting under a 100 is a milestone. Moore shot a 93 and Berry a 95 at Municipal and then at Angel Park Moore shot a 118 and Berry a 116. Floyd commented on the girls’ progress prior to Angel Park.

“Las Vegas Municipal is a straight-forward course, with not too much trouble. Riley and Courtney have both been working on their swings diligently. Frank Cox has been giving the girls some lessons and tips which has helped immensely. We play at Angel Park on Monday which is a tougher course and Aliante on Thursday which is also more difficult,” Floyd said.

If Moore and Berry can continue and Natalie King and Jayde Woodworth can shoot under 100, the team can steal second place from Clark. The four girls would all have to shoot in the 90s.

“I do think it is a realistic goal for my top four to shoot in the 90s, and if they work hard on their game in the off season they could all become quite good little golfers. In addition, I don’t lose anyone this year, as Jayde will be my only senior next year. By the time these girls are juniors and seniors they should be doing very well,” she said.

Junior Golf President Frank Cox agrees with Floyd. He said he has been working with the girls and helping Floyd make the girls better golfers.

“Riley Moore and Courtney Berry are two of the girls I work with,” Cox said. “A week ago they had one day that Julie couldn’t be there. The only girl that showed up was Courtney. I worked an hour with her and we went from where she couldn’t hit the ball to where she was ripping it. We got her golf swing to where she could turn her hips and body through and she started hitting every club just perfectly. It was like you could just see in her head a light coming on. It was a wonderful thing to watch.”

Cox also got to work with Moore. He said he likes her potential as a golfer.

“Moore is only a freshman and I think in the long run she will be very good. She is pretty tall and she has pretty good fundamentals. She also sings and this gives her good confidence. She has the self-confidence that golfers need and I think she will be a very good player in a year or two. All of these girls — you will see a big improvement by the end of the season. If they continue to play throughout the spring and summer I think we will have a good golf team next year,” Cox said.

Cox is excited and wants to keep working with the girls for the rest of the season.

One way Cox is helping both teams is by having both the girls and the boys compete in Pahrump Junior Golf Tournaments which are scheduled for noon, on the first Saturday of every month at Lakeview Golf Course at 12 p.m.