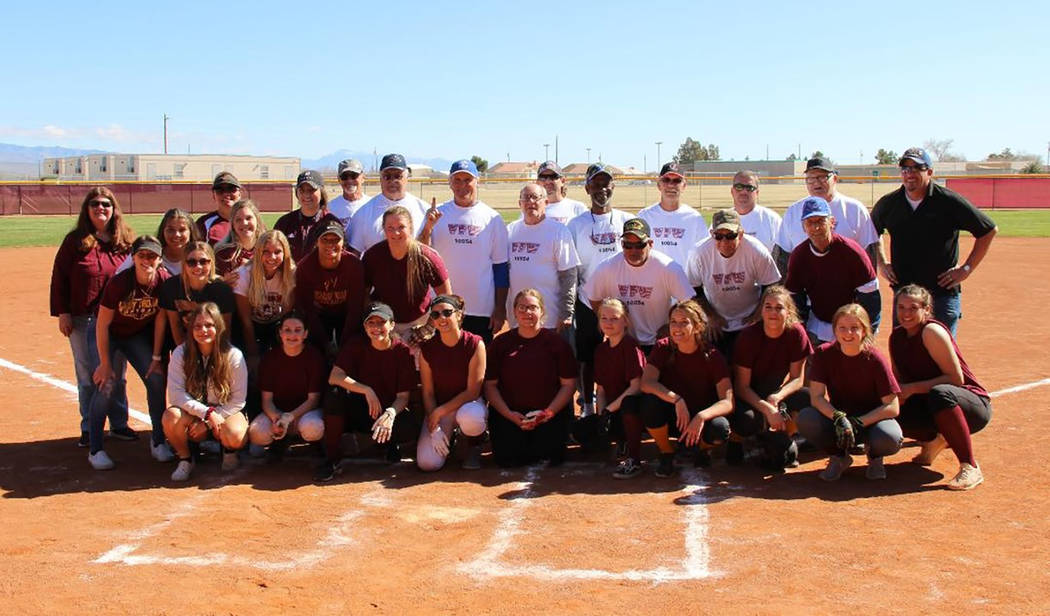 Chuck Hoover/Special to the Pahrump Valley Times Players from the Girls Who Love Softball and the VFW Auxiliary after the KC Connell Memorial Batting 1.000 Challenge on Sunday at Pahrump Valley High School's Floyd Field. 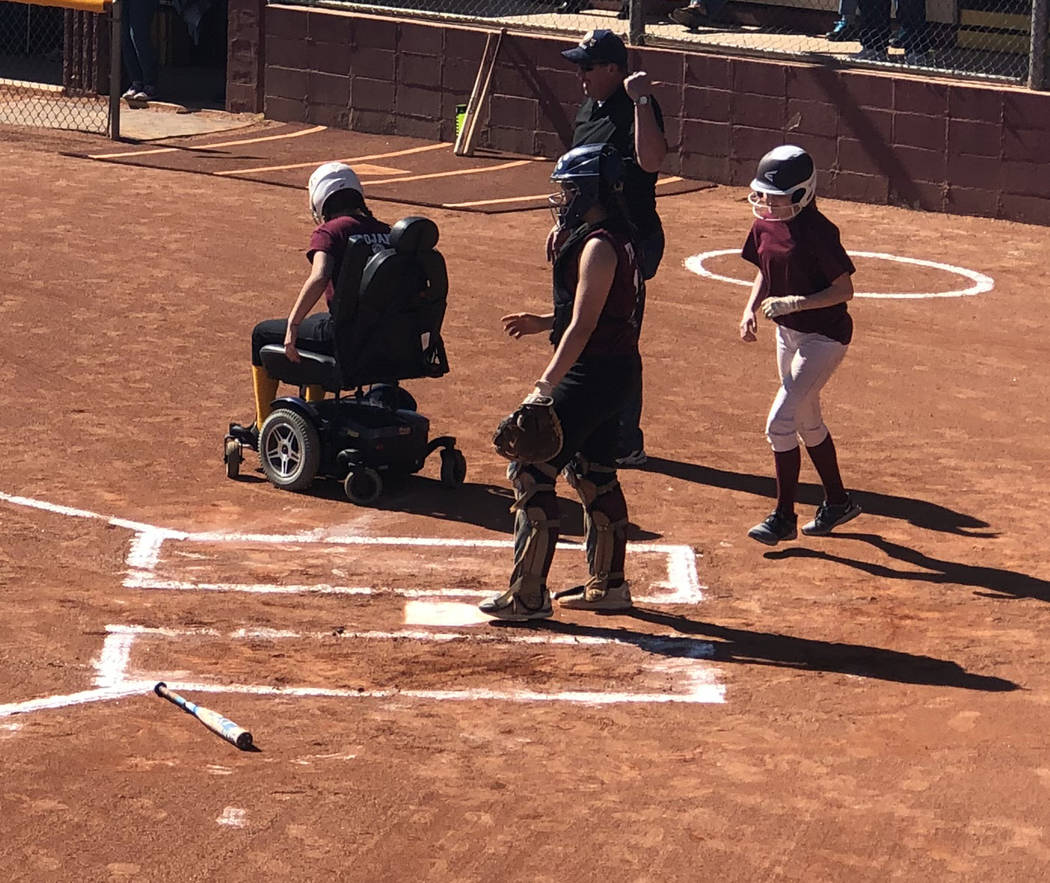 Tom Rysinski/Pahrump Valley Times Catalena Sandoval of the Girls Who Love Softball sets off for first base in an electric wheelchair after being hit by a pitch Sunday in the annual fundraising game against the VFW Auxiliary. 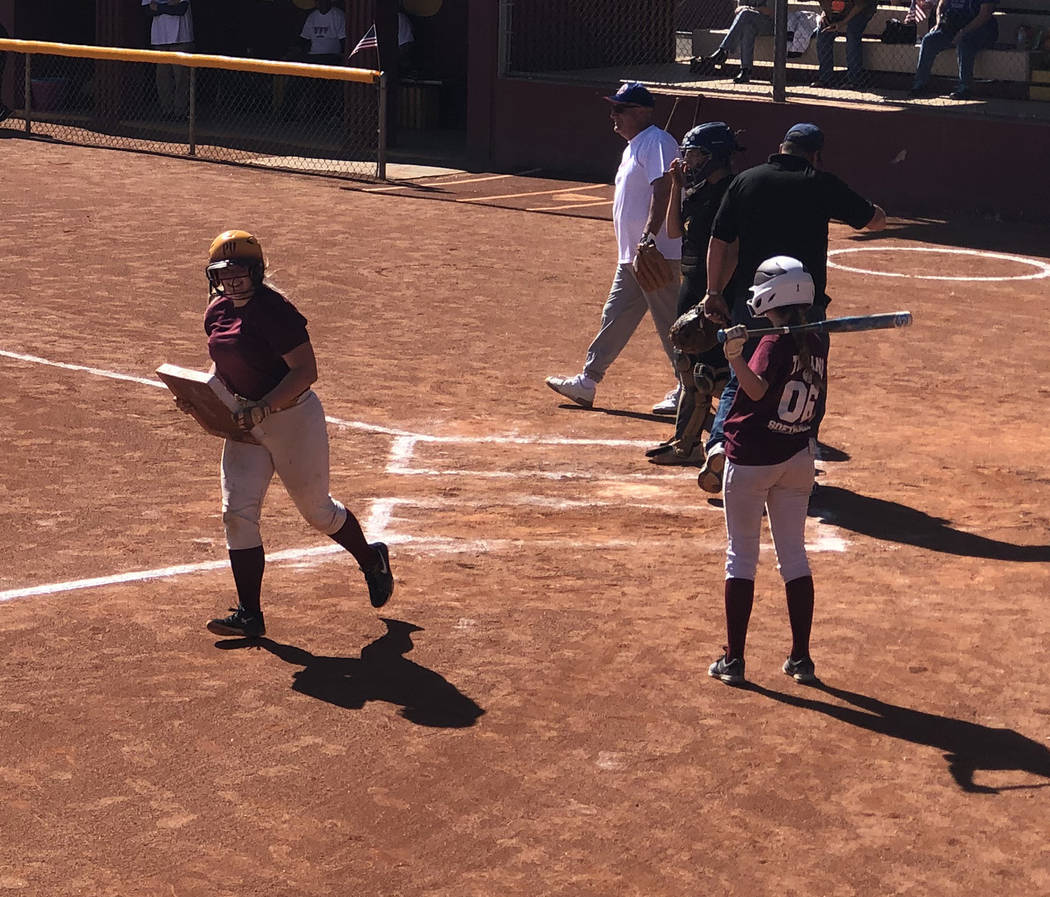 Tom Rysinski/Pahrump Valley Times Stolen base was a literal term Sunday as the Girls Who Love Softball used any means necessary to defeat their bitter rivals from the VFW Auxiliary at Floyd Field.

Tom Rysinski/Pahrump Valley Times The VFW Auxiliary Team and the Girls Who Love Softball before the start of the KC Connell Memorial Batting 1.000 Challenge on Sunday at Pahrump Valley High School. 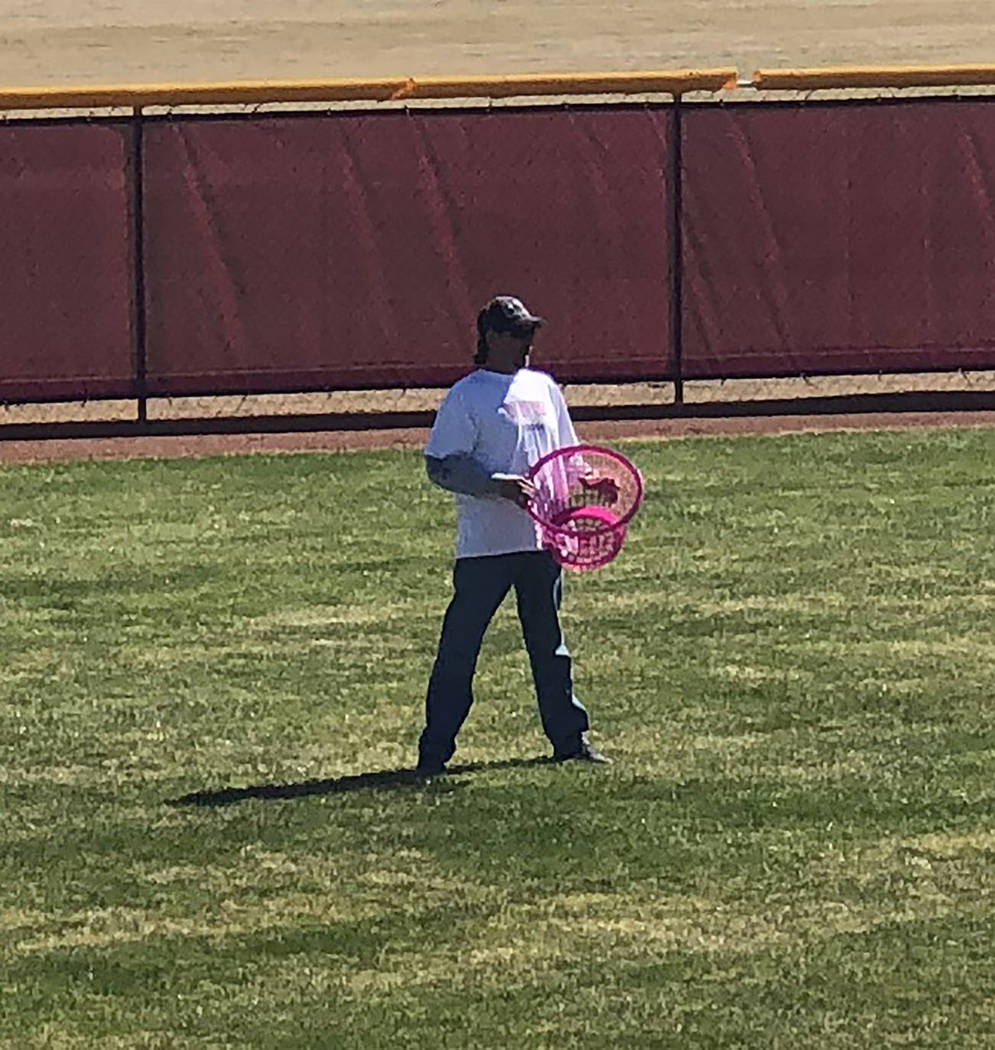 Tom Rysinski/Pahrump Valley Times In an effort to even the playing field against the cheating and stealing by the Girls Who Love Softball, the VFW Auxiliary switched to larger gloves in the outfield during Sunday's game. 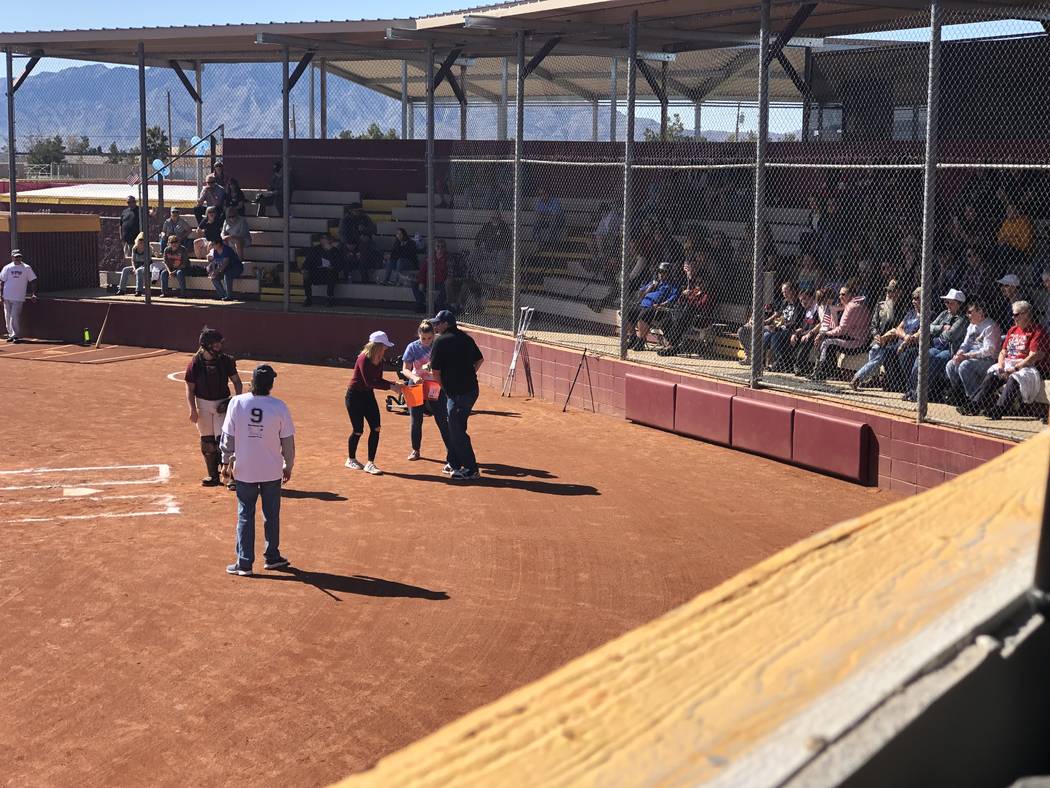 The vicious rivalry between the Girls Who Love Softball and the VFW Auxiliary played out again Saturday at Pahrump Valley High School’s Floyd Field, and once again it was a disgusting display of utterly abysmal sportsmanship.

Sure, the final score was 13-12, or perhaps 14-13, depending on whom you believe, as the Girls Who Love Softball won the KC Connell Memorial Batting 1.000 Challenge for the fourth time in six years. But anyone who witnessed the grotesque disregard for the rules of fair play could not take seriously the final score.

At one point, two players from the Girls Who Love Softball team literally reached into the buckets of money raised by this event to bribe the home plate umpire, who happily took the cash and allowed the charade to continue.

On the bright side, there was a lot of cash with which to bribe umpires. The game, despite incompetent umpiring, frequent shenanigans and outright silliness, was part of an annual fundraiser for the VFW Auxiliary and local softball.

“Last year, we partnered with the younger girls and the year before that it was the high school girls, so we are going back and forth so we can help both age groups with their equipment and any kind of special needs they might have,” said second-year VFW Auxiliary President Bonnie Darrell. “Last year, we raised $5,600 which we split with the younger girls. This year we’re hoping for $6,000.”

The horrific display of softball was only the closing chapter of the fundraiser, which included a Fill the Glove campaign at several local businesses on consecutive Saturdays. According to fundraising coordinator Stacie Nicosia, that brought in $2,300, helping launch the fundraiser to new heights.

“We did $8,000,” Nicosia said. “We will be presenting the school team with their check on March 18.” That is the date of the Pahrump Valley High School team’s home opener against Moapa Valley.

One can only hope the Trojans and Pirates will show more respect for the game of softball. At one point, Catalena Sandoval of the Girls Who Love Softball stole an electric wheelchair — presumably from one of the less able-bodied members of the VFW Auxiliary team — and casually cruised around the bases in it, in effect thumbing her nose at her elders in the first-base dugout.

One of the key elements of the fundraiser was the sale of raffle tickets, especially for the grand prize. More than 800 tickets were sold for that.

“We have luckily partnered with a lot of great businesses around town for our grand prize, which is five dinners for two at five different restaurants,” said Darrell, noting that the Batting 1.000 Challenge is the VFW Auxiliary’s largest fundraiser of the year. “We have Stockman’s Steakhouse, Symphony’s, Mountain Falls Grill Room, Mom’s Diner and Terrible’s Roadhouse in for the grand prize, plus we have a lot of other businesses that have donated gift baskets and things like that we’re going to raffle off today.”

Hopefully, those businesses are run more honorably than the Girls Who Love Softball team, as at one point the concept of the stolen base was bastardized to mean carrying it with you as you advanced so you could drop it, stand on it and be safe no matter where you were. The umpires, who overlooked so much of the quasi-criminal behavior on the field, woke up long enough to wipe that run from the books.

But the financial books were in much better shape than the scorebook, and the money raised will do a lot of good for both groups.

“We use it for a lot of different things,” Darrell said. “Part of it is for our relief fund for any veterans or auxiliary members who might need help monetarily. Also for our food bank, and any kind of special programs that we have for the community.” And the VFW Auxiliary does quite a bit in that area, and that is one reason why life member Barbara West makes the drive from Boulder City to be part of the post in Pahrump.

“This is the best VFW and VFW Auxiliary you can find,” said West, stationed at the concessions stand. “You walk through the door and it’s hi, how are you, hugs. They are loving, caring, wonderful people. These people help everyone, vets and nonvets. We were so impressed, that’s why we come an hour and a half to do this. This post is top drawer.”

Despite their blatant ignorance of the concept of fair play, somehow the Girls Who Love Softball also made a positive impression on West.

“I have to rave about these girls from the high school,” said West, a grandmother of 24 and great-grandmother of 19. “They are amazing, they are ladies, they know what their job is, and they do it 99.99% absolutely perfect. They are just wonderful. They have goals, and they’re working toward them.”

True, if stealing and cheating in an effort to win an allegedly friendly softball game against our veterans and auxiliary members counts as a goal. And Pahrump Valley High School softball coach Cassondra Lauver has plans for the program’s share of the ill-gotten booty.

“The community was very supportive, and it looks like we may have enough to purchase a brand-new JUGS pitching machine,” Lauver said. “This machine throws multiple pitches, is remote controlled and is programmable to throw different pitches in a random sequence. That allows it to simulate a live pitcher. We looked at one at the Premier Girls Fastpitch Tournament this summer, and it would be an incredible upgrade to our hitting facility.”

Those connected with the VFW Auxiliary were gracious, despite losing for the third consecutive year with the help of some underhanded methods. They preferred to focus on the money raised and the good they can do with it.

“It’s not just vets that they’re helping, and I feel so honored to be part of it,” West said. “It is so heartwarming to be connected with so many fantastic people.”

Darrell already was thinking about the next fundraiser, which comes up Saturday.

“Our next big event is Saturday at the VFW at 2:30, when we’re having a meat raffle,” she said. “We buy meat and people come in and buy tickets and we raffle off meat — steaks, chicken, ham, everything. It’s so much fun.”

Hopefully, the taste of the meat will help wipe out the bad taste in the mouths of those who witnessed the chicanery Saturday on the softball field.