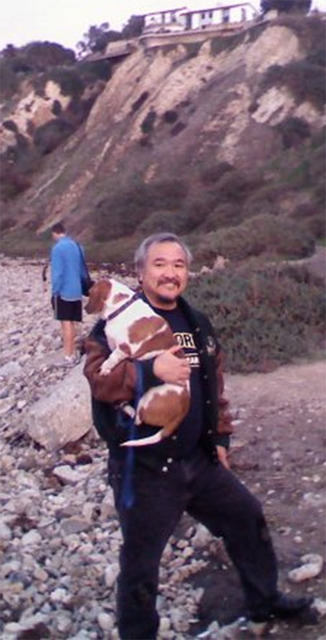 Bogey going for a walk on the beach near Torrance, California with sports reporter Vern Hee. Who is really doing the walking here? Special to the Pahrump Valley Times 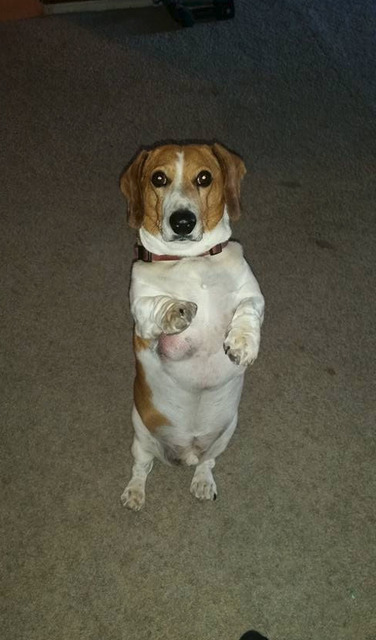 A true lover of food, Bogey the Dachshund was not shy about begging for food. If not for a stray dog, he would be with us today. Special to the Pahrump Valley Times

I was watching some dogs being dogs, running through a field while I rode my bike. These same two dogs would get up from their nap and we would race to the end of the fence. Sometimes I would win and other times they would win. I think it just depended on what they were doing when I interrupted them.

Which got me thinking about my dogs and just dogs in general and what great athletes they are.

I know it’s stretching it but I truly think they are some of the animal kingdom’s greatest athletes.

I mean, look at how they react from a dead stop. One minute they are perfectly still, sound asleep and next they are chasing some car at full speed, zero to 30 in just five seconds or better, depending on the breed of dog.

I have two dogs who used to get up from a dead sleep just by the mention of food.

Dogs are also great sprinters. The fastest dog breed in the world is the greyhound, who can speed around a track at 45 miles per hour.

These animals can do plenty of other things besides run.

Some are great acrobats and can do flips in the air. Others are like weightlifters. I was online and saw a photo of a dog pulling 5,000 pounds of cinder block.

And believe it or not, there are all kinds of competitions that dog lovers can revel in.

Like Dockdogs. In this competition which boasts some 10,000 dogs, the contest sees whose dog can swim the fastest, jump the highest and leap the farthest and it’s all aquatic events.

The dog olympics are also becoming popular. This type of event measures a dog’s speed and agility against other dogs. They even had one in Rio after the summer games.

My dogs would not be competing in anything too strenuous except for sleeping. If there were a napping contest, my basset hound would be a gold medalist for sure.

This brings me to my dog Bogey, who I have had for the last eight years by marriage and who was in the family for 14 years. This dog was the greatest of athletes. He tragically passed away before his time. I want to take this time to say farewell to my Dachshund, Bogey. A stray pit bull ended his life and he went down fighting.

Bogey was a champion fighter and often took on other dogs three times his own size. By my count, this was his fifth or sixth fight in his lifetime. He had gone to the vet at least three times to be sewn up for various wounds and always he would recover from his fights, good as new.

This time we took him to the vet and it was his last time. The wounds were just too great for him to recover.

Oh, what a life this dog had.

He also was by his own right a sprinter, despite having short legs. He was quick for his size. If there was an Olympic chicken-killing contest he would have won that. By our account, he was able to kill 19 of our chickens. This dog had no problem chasing down a chicken. The dog came before the chickens so we just had to make a dog-proof chicken pen and that finally came. To him, chicken legs were finger-licking good, for that was all he would eat off the birds.

Bogey was also a master sleeper and an olympic food eater.

Nothing disturbed him from his long naps, except food.

The dog could sniff out pizza from a dead sleep. All you had to do was waft it in the air and he was by your side. But it wasn’t just a particular food that Bogey liked. He would not discriminate and liked all food equally. At the end of his life he probably will go down as one of the heaviest Dachshunds.

When it came to food, the dog was not shy in letting you know he wanted some.

My wife loved the way he begged.

“He always was sitting on his bottom with those cute little paws sticking out,” my wife, Terri Hee said. “When he sat straight up, I thought that was the best.”

If they also had an Olympic event in begging, he would have certainly won a gold medal in that.

Dogs are all about habit and having their routine.

Bogey was like an alarm clock. We would put him to bed at 8 p.m., and he would wake us up with a bark to let him go outside every day at 6 a.m. sharp.

Of course, he was a loving dog and will be missed greatly by his family.

“He was always trying to steal a kiss,” Terri Hee said. “He would roll over in front of you so you had to rub his belly before leaving a room.”