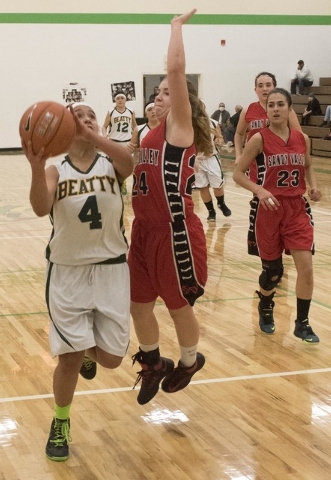 The Lady Hornets lost two close games over the weekend to Sandy Valley on Friday, 38-29 and Round Mountain on Saturday, 40-35.

Injuries have taken a toll on the Beatty girls’ basketball team. Two of the Lady Hornets’ strongest players, Maggie Cathcart and Claudia Granados, were unavailable in the last two games.

Hornets Coach Aimee Senior had this to say about the injuries.

“Well, Maggie is out with a muscle strain in her back and Claudia sat out the game against Round Mountain with an injured leg, so we were missing two strong players,” she said.

The Hornets (4-2 overall, 2-2 Division IV Southern) against Sandy Valley (5-1, 3-0) came out with consistent shooting, but it wasn’t enough.

During the Sandy Valley game the team was outscored in both halves by the Sidewinders, 22-19 in the first half and 19-10 in the second.

The coach said the injuries impacted the team’s offense.

“Friday, we had a tough time making our shots and Saturday we missed important free throws. Hopefully, we can get healed up and come back and play well,” Senior said.

During the Round Mountain (7-8, 3-0) game, the Hornets had the same problem as the Sandy Valley game. They were consistent in the shooting, but it wasn’t enough for the win.

Despite the loss, Senior believes with her two strongest players it would have been a different ball game. Senior believes this is the best team she has put together since her 2012 team was a state runner-up. So she knows her team has to win the close games in order to return to state this year.

The girls are away at Arizona to play Beaver Dam (4-2, 2-2) today at 5 p.m. Although the records are the same, look for the Hornets to throttle this team.