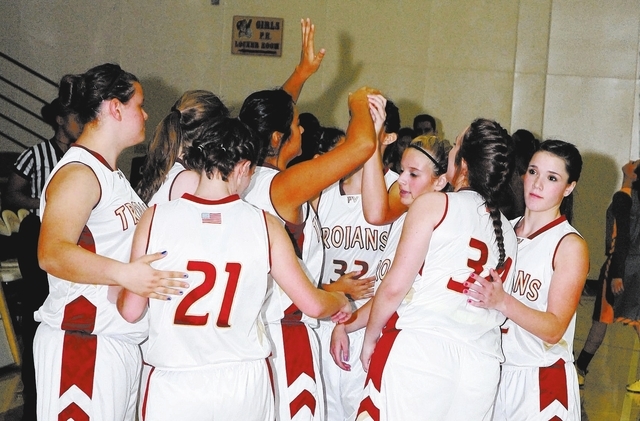 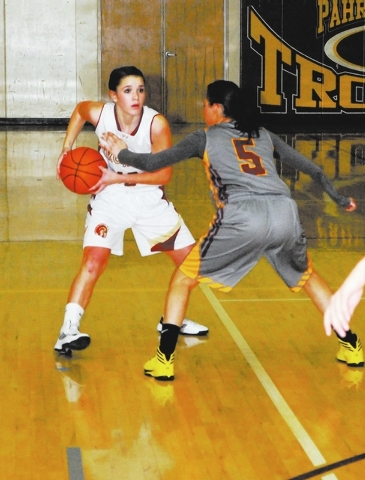 The final minutes were ticking off and with just 2:56 remaining in the game the Lady Trojans basketball team had just taken a fragile 30-29 lead. They took the lead and edged ever so closely to victory when Shayla Dance made a clutch jumper to make it 34-30 at the 2:00 minute mark. It took Alyssa Murphy to then ice the game. She came to the line and sunk two free throws in a row to make the final score 36-30 with just 52 seconds left on the clock.

What saved the Trojans was their ability to make clutch shots and some gutsy free throws in the last minutes of the game to give them the victory against Del Sol High School, a non-league game. Ironically, the girls have not been a free throw making team said Trojans Coach Jennifer Hagstrom after the game.

Hagstrom said, “Alyssa Murphy knocking down those two free throws back to back to make the game 36-30 was huge. It gave the girls a cushion and the confidence to finish out the game.”

For the Trojans, this is a positive note during the preseason with a 7-7 overall record.

The pace of the game was set early with Del Sol pressing and the Trojans doing a fairly good job keeping their composure. Hagstrom told her girls how to beat the press.

“I told them we can’t make flat passes and to focus on keeping the ball in the middle. I told them not to panic and push it up the sideline because that is where the trap was coming,” she said.

The Trojans broke the press and at halftime the score was 19-16 Pahrump.

The Lady Trojans came out of the locker room at halftime energetic and ready. Hagstrom said after halftime they began to focus on a specific player on Del Sol’s team.

This helped the Trojans defensively holding Del Sol to only 14 points in the second half, only 3 in the 4th quarter of the game.

The turning point of the game was drawing the fouls and getting the team into the double bonus.

The Trojans were better statistically on an overall level than they had been all season.

Hagstrom said, “We shot 45 percent which was our highest all season and we out-rebounded Del Sol. We crashed the boards and turned those rebounds into positive offensive possessions.”

Some of the athletes that played exceptionally well Thursday were Amber Skilling, Shayla Dance and Jill Smith.

Hagstrom said, “Amber had a great night doing the little things. She had 9 boards and 8 steals. She played really good defense and was a rock for us. Shayla Dance and Jill Smith were also monsters on the boards and Shayla was a more vocal leader.”

The coach also said that the positive plays were not only done by those athletes, that the entire team meshed well to help them in their victory.

“Everyone contributed on Thursday night, it was a great building block game for us,” she said.

The Trojans go into the winter break in the mind frame to keep working offensively and prepare for their first game of the New Year against Clark on Wednesday, Jan. 8 on the road.

“We are going to work on adding to the offensive sets. We need to work on ball handling and overall fundamentals. Over the winter practices shooting will continue to be an emphasis as well as guard and post breakdowns separately. Defensively we continue to stress help side in the man and try to add a wrinkle to the press,” Hagstrom said.

The Trojans come back from break playing two tough league games on the road against Clark on Wednesday and Cheyenne on Friday Jan. 10.