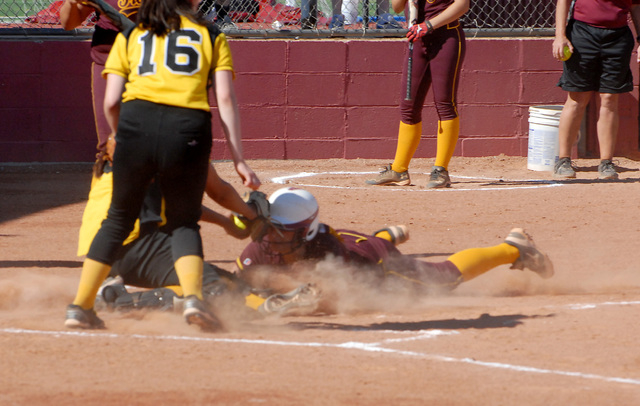 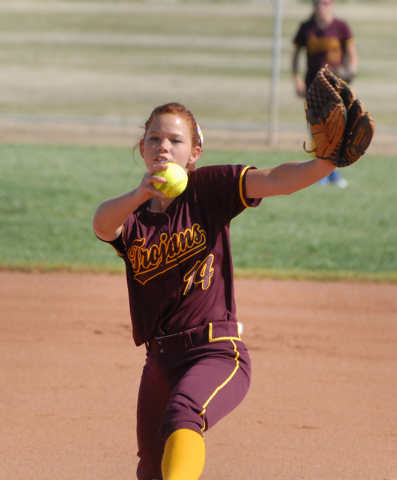 Trojans Coach Ely Armendariz has the luxury of being able to choose from different pitchers when he wants to rest ace pitcher Whitney Roderick.

The girls never really were in danger of losing the game, thanks to the great pitching by junior Lonnie Kaiwi.

Kaiwi tossed a two-hitter for the win and was more than satisfied with the outcome of the game.

“My pitching is average for high school. I feel like my pitching is pretty good for where I am at. I still want to get better,” Kaiwi said.

She went on to say that her pitching was heavily influenced by Whitney Roderick’s father. Kaiwi likes pitching but does not think she will be doing much of it next year because she wants to play another infield position.

Kaiwi displayed a lot of poise on the mound for someone who does not get to pitch that often. Her control was excellent and she threw the ball in the strike zone and even was able to get her off-speed ball in the zone.

“They hit the ball, but as long as we play defense we should be OK,” Armendariz said. “They were hitting pretty well off Lonnie but we played good defense. Once we started hitting it was OK. We scored some runs and we got a comfort zone.”

The Clark Chargers were crushed by the Lady Trojans on Tuesday 11-0.

Armendariz said his only concern with the Chargers game was that his team was not scoring early enough.

He said several players ripped the ball against Clark. Kaiwi had a really nice hit, Polnau came through, Koenig came through, Soliwoda hit and so did Pryor, Jordan Egan and Whitney Roderick but it took them awhile to get going.

Outfielder Melanie Lawdensky believes her team can go all the way. During the game she bunted the ball and on numerous errors was able to go around the bases and score.

“I think we are really ready. We do have some things we have to work on as a team. It’s just the little stuff that can easily get done. I think we are an experienced team that has played together for eight-plus years. I think we have a really good shot going into the playoffs,” Lawdensky said.

The Trojans played Western on Thursday (too late to report) and the coach is not taking them lightly despite beating them earlier in the season.

“We will be pitching Whitney Roderick in that game. It has been a few games since we last saw Western and they have had some games to improve,” he said.

In the last game against Western, the girls got off to a slow start and only scored 5 runs after threatening the Warriors almost in every inning except the 1st and the 4th where the Trojans went quietly in order.

The team improved to 5-2 and in league, 17-10 overall and still is tied for second with Cheyenne. They play the Chaparral Cowboys, a non-league game, this afternoon in Las Vegas at 3:30.