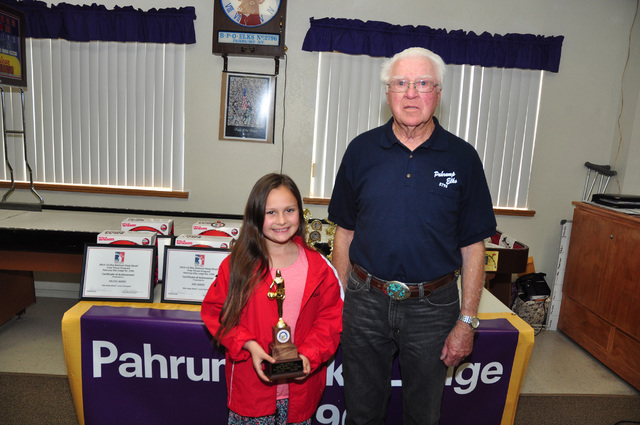 Pahrump Elks Lodge #2796 honored Asia Ibarra with a dinner for finishing in fourth place at the regional free throw competition.

Each year the Pahrump Elks Lodge holds an annual “Hoop Shoot” November. This is year it was on Nov. 15. The Hoop Shoot is a free throw shooting contest for boys and girls ages 8-13.

Asia Ibarra at 8 years old won the state championship in the 8-to-9 year old category. She made 16 of 25 baskets and qualified to go to the regional competition, where she competed with other girls from Arizona, California, Hawaii and Utah. The regional was held in Las Vegas on February 21.

If Asia had went on to the nationals she would be competing this week in Springfield, Massachusetts.

The nationals take 72 finalists from all over the country and they compete from April 16 to 17. The names of the national champions will be inscribed in the Naismith Basketball Hall of Fame in Springfield.

The Elks national free throw contest is the largest co-educational youth program in the United States. Last year the hoop shoot had more than 3,300,000 participants.