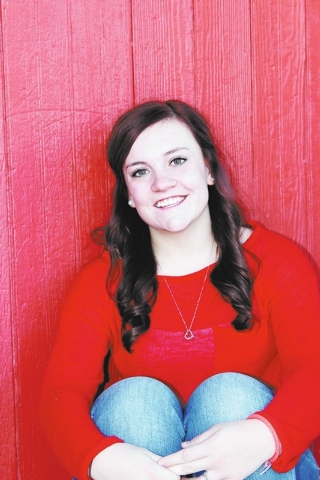 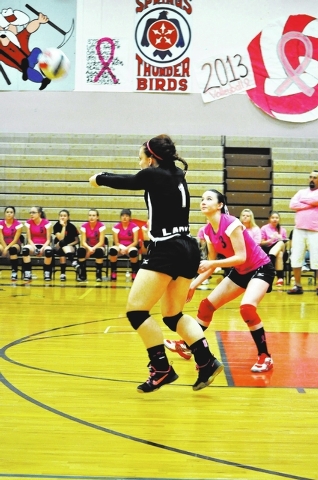 Tonopah volleyball players are for the most part a different breed of athlete who are forged in the wilderness which surrounds them and molded by hard work and a lot of guts.

Junior Maddi North is one of those athletes. She works hard at her sports and plays hard in the great outdoors. She applies what she has learned from her outdoor experiences to the sports she plays.

North is the current libero for the Tonopah Muckers volleyball team. The libero’s primary responsibility is to play defense in the back line. Liberos don’t rotate and just remain in the back where they dig out all the hard hit balls.

North was pleased she made the team this year and has grown into her position.

“I have been libero since I was a freshman. I was on JV and was allowed last year to come up for varsity games. I had a jersey but I didn’t play much,” she said.

Muckers Coach Harvey Gonzalez liked North and moved her up because she works hard.

“She has a great work ethic, solid footwork and fundamentals, coachable, great passer and controls the back court defense,” Gonzalez said.

North, since coming to varsity has worked hard on her fundamentals as a libero. She is determined to become a better player.

“The hardest thing to do for me is my timing, not trying to knock the stripes off the ball as coach would say,” North said. “Being a libero is a little more intense and you have to focus on your footwork. You definitely have to get to those balls and be able to stop. If you are running to those balls and moving while you hit it you are going to shank those balls all the time.”

The team is currently practicing hard for the end of the season. They have two games left, one against Indian Springs and the last one against the powerful Pahranagat Valley team, a team which has made it to the state finals 17 times.

North believes the team is going to have to overcome a mental thing to beat Pahranagat Valley. “I think it is always a mental thing with them,” she said. “I think being at home will take a little less stress off us. Ever since we have won state last year, I think it gives us a little more and we are not so much into our heads. I definitely think it will give us an advantage if we are at home.”

North is a true competitor and she definitely gets excited about the sport, but volleyball is not the only sport she plays. She says her passion is in the next season, which is basketball for her.

“I like the aggression in basketball,” she said. “My family gets together to watch basketball. Some families rave about football, everyone watches football and you go to the family’s house and you watch football. My family is like that but we watch basketball. It’s my favorite sport because it’s aggressive, it’s fast-paced and it’s also an extension of my family. We definitely watch a lot of basketball together.”

When she is not taking her aggressions out on the court she is outside roughing it in the back country and hunting with her father and younger sister. It is the one passion she shares with her father. Both have deer tags for late November. This is the one thing she has been doing with her father since she was 12. Since then she has bagged 3 bucks. She said it’s her time to spend with her dad.

“It’s fun hunting. At 3 a.m. in the morning, it is cold outside and you are saying to yourself, ‘Maybe I should have rethought this.’ Then when you shoot that buck, it’s one of the best moments,” North said.

She thought back to when she was younger and shot her first buck and recalled her elation. “I had just turned 12 when I shot my first buck. I was not scared at all, I just wanted to shoot the deer. Your dad is just so proud of you when you shoot that buck, it is just the best feeling in the world.”

North believes the best part of hunting is when you get the buck. “When you don’t get the buck you say, ‘What a waste of time,’” she laughed.

North said she gets good grades and hopes to be college bound to the University of Nevada, Reno. Once at Reno she is thinking of getting into broadcast journalism. From there, her plans are set on Boston. She has admired the city and just has her mind set on living in Bean Town.

She is into Boston because it’s the town of her favorite basketball team, the Boston Celtics.

“My uncle and aunt have been there and I have seen the pictures. I had this feeling that is where I belong,” she said.

Whatever she does, North will devote all her energies she can muster to accomplish her goals and she will succeed because she believes in hard work.