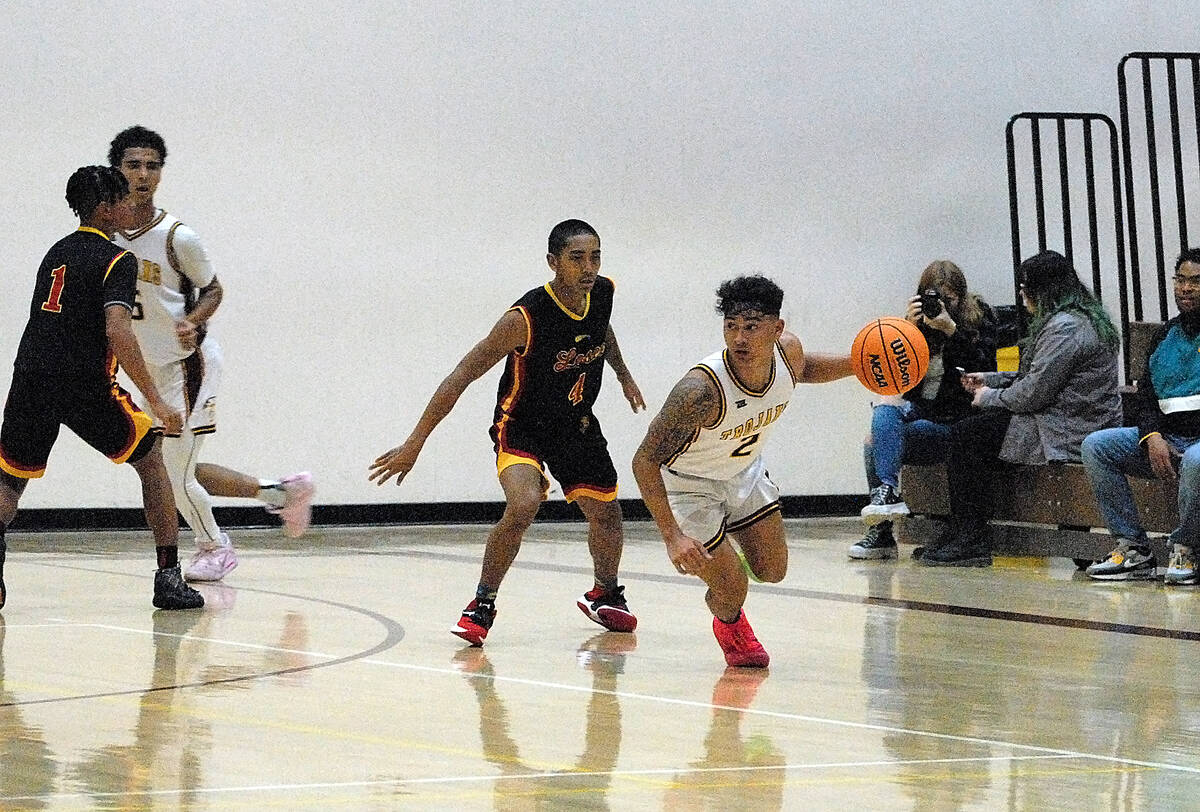 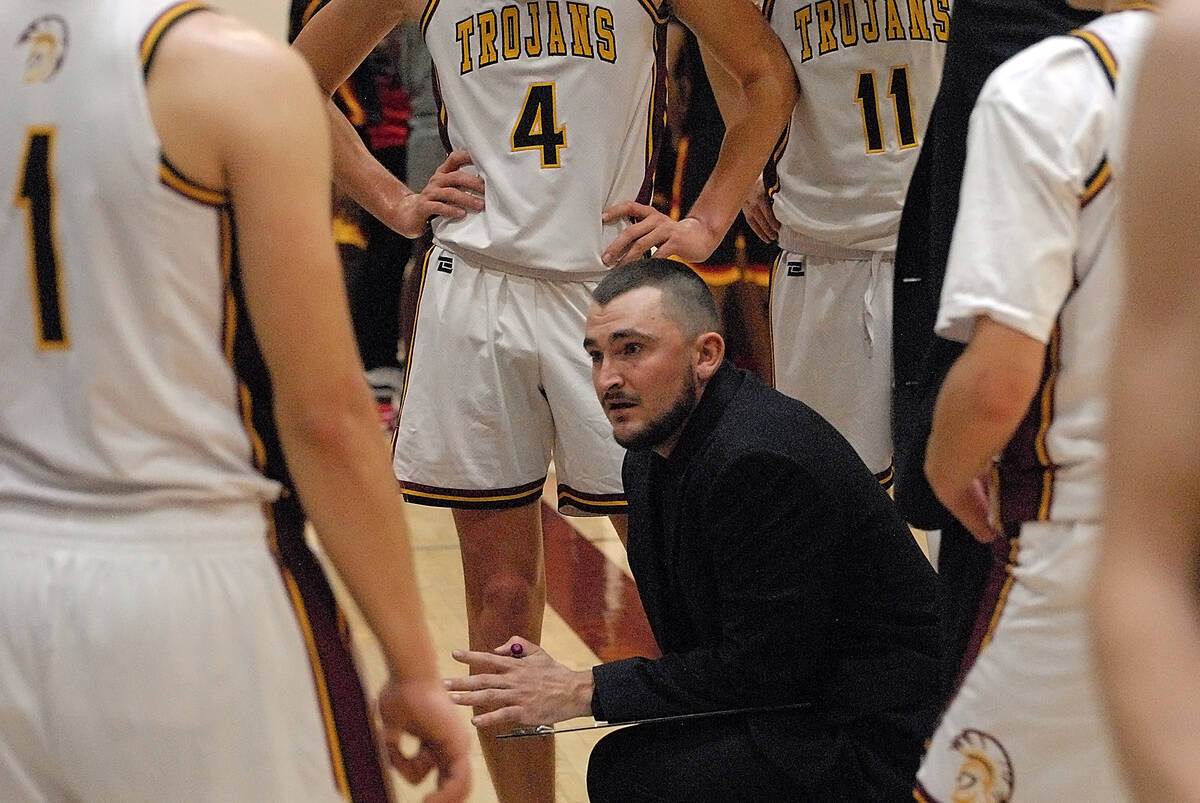 Horace Langford Jr./Pahrump Valley Times Pahrump Valley head coach David Wilson giving a speech to his team during a timeout in the Trojans' game against the Losee Lions. 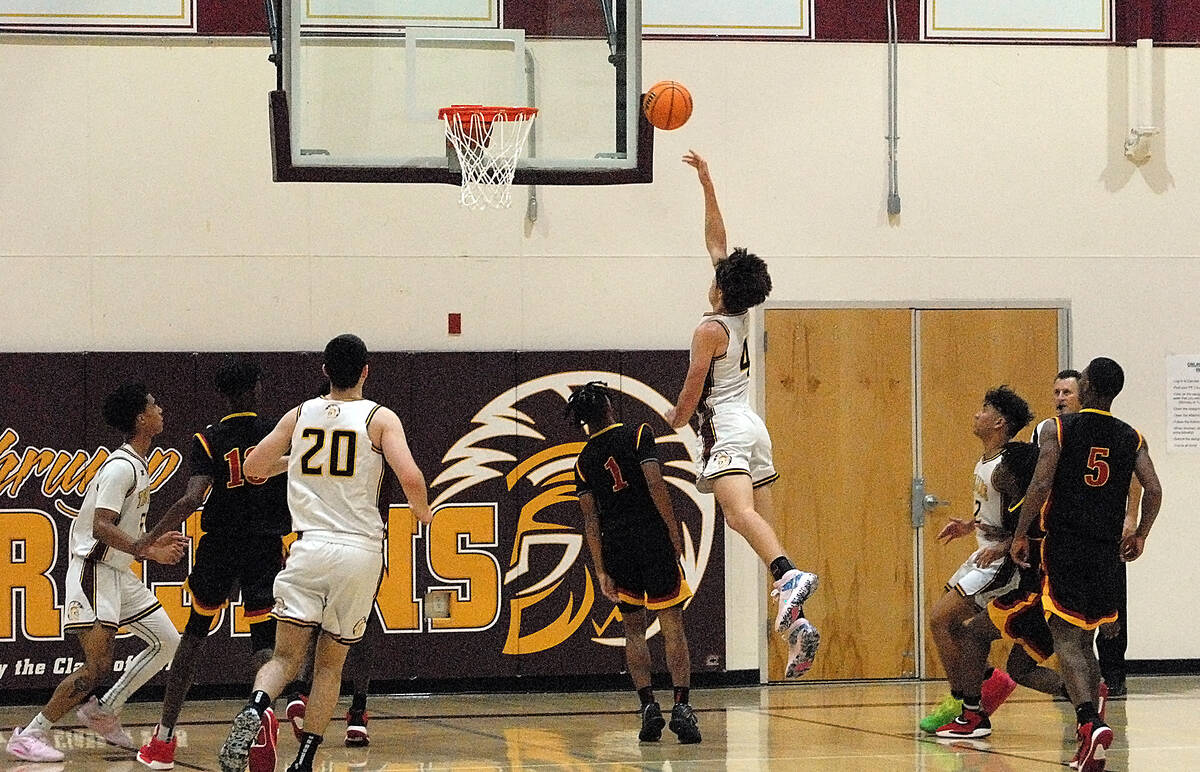 Horace Langford Jr./Pahrump Valley Times Senior forward Aiden McClard (4) was named to the all-tournament team at the 2A/3A Challenge. He averaged 11.7 points and six rebounds for the Trojans, leading them to a 2-2 record in the tournament.

The Trojans entered the tournament with an 0-1 record after dropping their season opener 68-30 to the Losee Lions on Thursday night.

Pahrump finished with a 2-2 record over the course of the two-day tournament.

Senior forward Aiden McClard was named to the all-tournament team for the performances he turned in throughout the weekend.

He led all Trojans in scoring and rebounding, averaging 11.7 points and six rebounds per game in the tournament.

McClard had his best shooting performance in the Trojans’ 70-10 victory over the Cristo Rey St. Viator Royals.

He scored 17 points, shooting 7-for-10 from the floor and 2-for-2 from the free throw line. He also grabbed five rebounds.

Forward Ryder Cordova got in on the rebounding action for the Trojans. He led or tied for the team lead for rebounds in two games – grabbing seven or more rebounds in each game.

Like McClard, Cordova’s best game of the tournament came against the Royals. He scored 10 points and grabbed seven rebounds.

Cordova followed up that performance with an eight rebound game in a 59-40 defeat at the hands of the Lincoln County Lynx.

The Trojans’ second win of the tournament came in a 50-28 victory against the White Pine Bobcats.

Guard Daxton Whittle led the Trojans offense against the Bobcats.

He finished the game with 20 points, shooting 6-for-14 from the floor. Whittle made four of his seven attempts from behind the 3-point line and went 4-for-4 at the free throw line.

This was the most points he has scored in a single game so far this season.

With their performance in the 2A/3A Challenge, the Trojans’ record improves to 2-3 on the season.

Their next game will be this Wednesday, Dec. 7, when they travel to the Las Vegas valley to take on the Somerset Sky Pointe Eagles in a non-league matchup.

The Eagles are entering the matchup with a 2-4 record after they dropped their Monday night game against the SLAM Bulls by a score of 71-40.

Pahrump Valley won the meeting between the two schools last season by the slimmest of margins, winning 58-57.

Tip-off for Wednesday’s game is scheduled for 6:30 p.m.