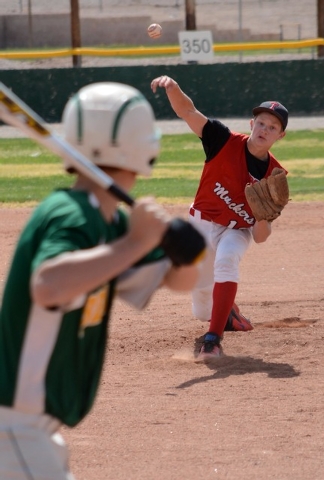 The Tonopah baseball team took no pity on the Hornets when they visited Beatty last Friday. The Muckers beat them by scores of 20-0 in the first game and in the nightcap 12-1. With these two victories, they are 4-0-0 in league.

The team basically gave the Hornets a hitting clinic, scoring 32 runs in two games, while pitching and defense held the Hornets to one run.

“I liked the fact that we keep winning,” Jewett said. “Our pitchers have to be our main players on the team right now but as a team, everyone is doing what needs to be done on the field.”

He said last weekend allowed him to give six new kids time on the field.

For the Beatty team, it was back to the drawing board. Hornets Coach Leo Verzilli said he had to change things up a bit and so he had a long talk with the team after the game, but he remains optimistic. After all, the team did well against Sandy Valley and split that doubleheader.

“We made a decision to change things. We thought originally that we would get those kids who didn’t know how to play in there to play. So, instead of sending those kids in there to get pounded I told them I will change everything by putting the nine best players on the field. and 10,11, and 12 will be the next players to play. Everyone else will get experience by practicing every day and watching the games,” he explained.

The Muckers are solid in pitching and that has been key during this season so far. “It is definitely our strong point. Just the way our pitchers have kept us in each game,” he said.

However, so many aspects of the team’s game have been improving significantly due to their great job in practice and during the games. According to Coach Jewett, their defense is coming along greatly and so is their hitting.

“Now we are starting to hit and field the ball properly. In fact, the team hit the ball much better this time than last week,” he explained. “Our hitting is going to be the main aspect that we need to keep working on.”