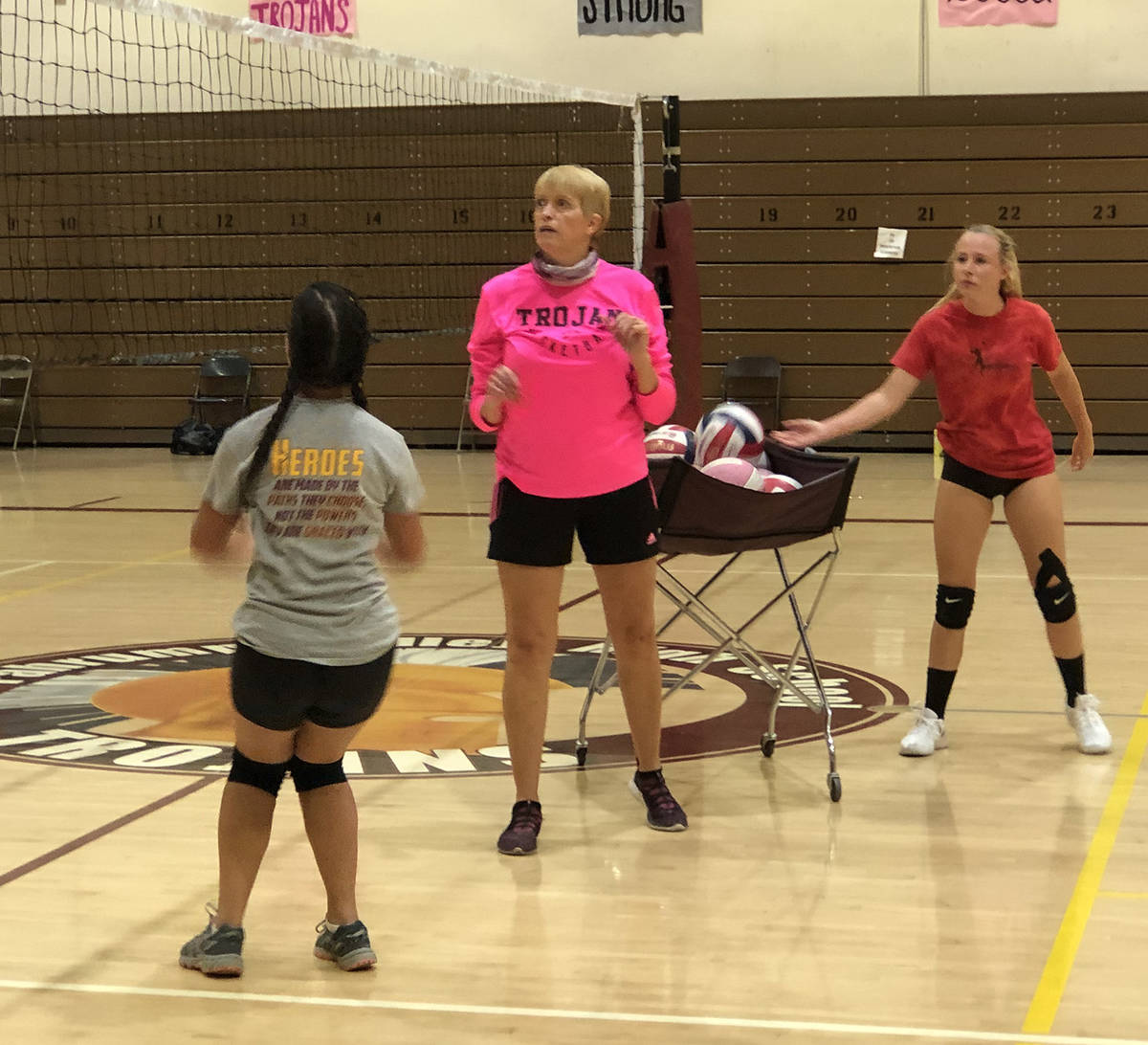 Tom Rysinski/Pahrump Valley Times Pahrump Valley High School girls volleyball coach Jill Harris said that moving her sport to March was not ideal, but there likely was no ideal solution the Nevada Interscholastic Activities Association could have found for the issues raised by the COVID-19 pandemic. 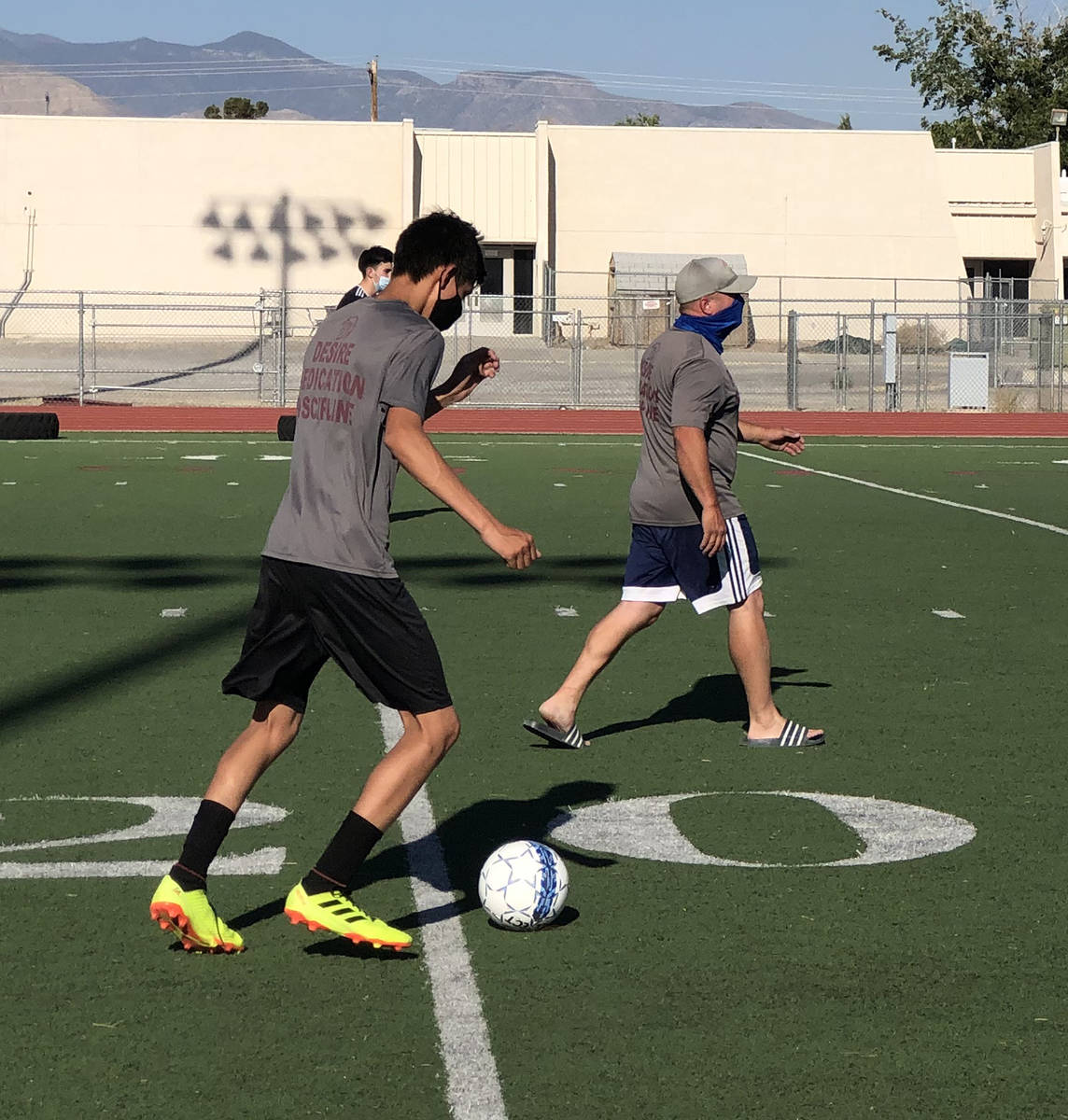 Tom Rysinski/Pahrump Valley Times Chris Roberts, boys soccer coach at Pahrump Valley High School, was relieved that fall sports didn't get canceled by the pandemic but said a six-week season will present some issues for teams. 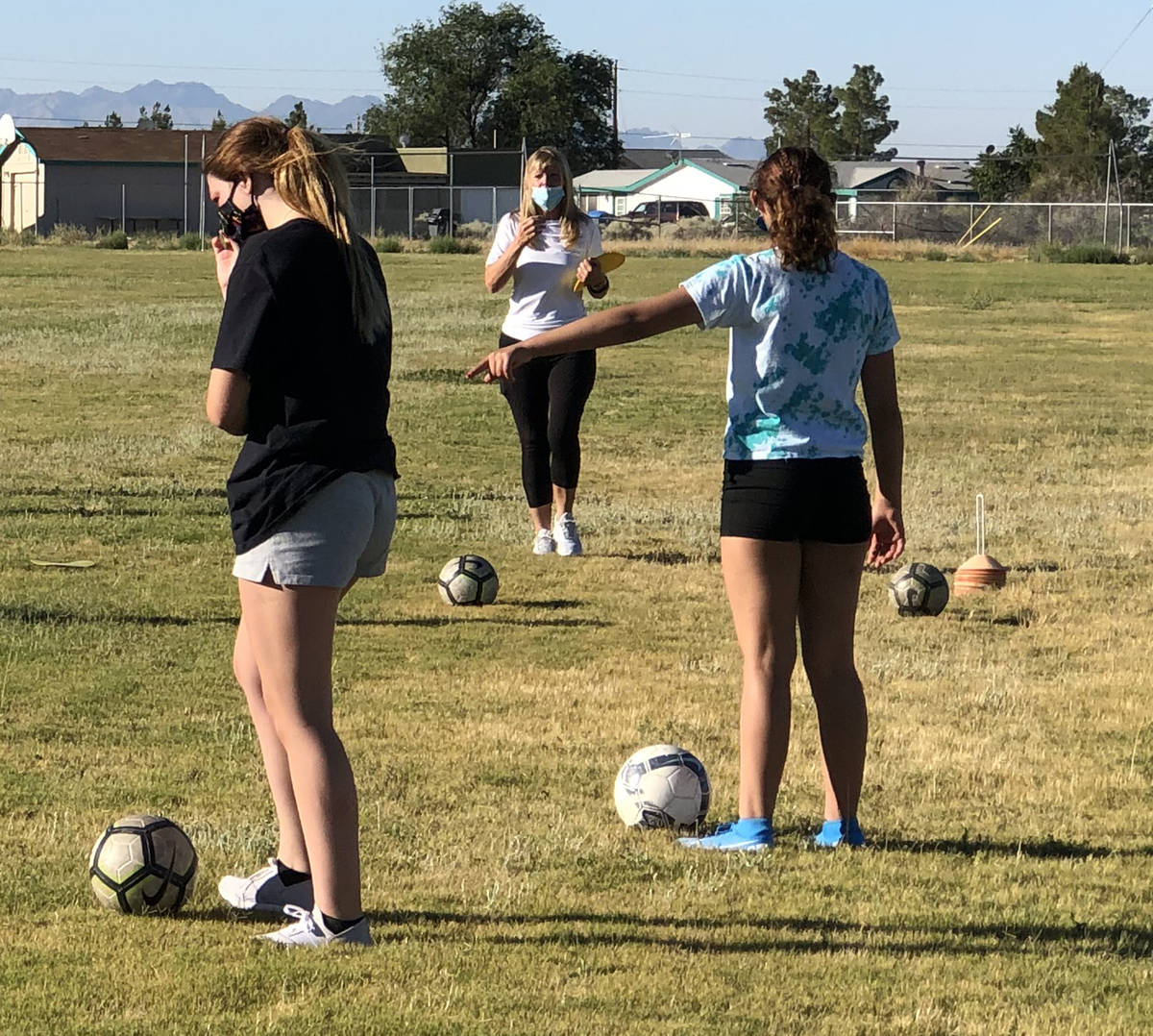 Tom Rysinski/Pahrump Valley Times Girls soccer coach Julie Carrington believes her Pahrump Valley High School team is a contender this season and hopes a way can be found to have postseason play within the parameters of the revised schedule for each sport.

No sports before January and most likely no state championships are the biggest takeaways from the Nevada Interscholastic Athletic Association’s major revision of the sports schedule for the 2020-21 academic year.

“The adjustments were reviewed by and have unanimous support of the NIAA Legislative Commission, which is made up of the superintendents of each Nevada school district with an NIAA member high school,” Executive Director Bart Thompson wrote in announcing the schedule. “The NIAA staff consulted closely with northern and southern league/region presidents of each of the classifications in crafting the adjustments.

Thompson noted that the framework allows leagues and regions in each sport to hammer out their own specific schedules within the dates outlined by the NIAA.

The most dramatic difference, other than not having any sports practice before Jan. 2, 2021, is the order of the seasons. The NIAA schedule calls for winter sports to go first, followed by fall sports, followed by spring sports. Each season will include six weeks of competition.

“It is an interesting model, but it does give every sport some hope that they may be able to compete for a partial season,” Pahrump Valley High School Athletic Administrator Jason Odegard said. “I think that there was probably a lot of concern about whether we would be able to get any kind of a fall season in.”

Playoffs will be at the discretion of the individual classifications, regions and leagues. It is anticipated that there will not be a state tournament in any sport.

“My biggest concern is I hope we get some form of a playoff,” said Trojans girls soccer coach Julie Carrington, who added her initial reaction to the announcement was “at least we’re going to get to play.”

The same sentiment was expressed by PVHS girls volleyball coach Jill Harris, who, like Carrington, figures to have a contender on her hands this season.

“Obviously it’s not ideal, but given the circumstances I’m not sure there was an ideal option,” Harris said. “It’s better than what they offered during the spring season last school year.”

The abrupt cancellation of spring sports was certainly on the minds of at least one spring sports coach, who hoped that the spring teams, the only ones affected by the pandemic during the 2019-20 school year, would get a break this time.

“Many of the baseball coaches are fighting for our kids to have a state tournament this season, even if it rolls out into the summer,” Pahrump Valley baseball coach Brian Hayes said. “Spring sports lost our state tournament last year, and it would be tough for our athletes to lose out on that two years in a row.”

Hayes acknowledged the NIAA decision did not sit well with him.

“I am not a fan of the decision, but at least there is something in place right now and we have an idea of what is going on,” he said.

That was another common sentiment, as the uncertainty had led the Southern Nevada Football Coaches Association not only to press the NIAA to make a decision but urged parents to call the NIAA for the same purpose. Less than a week after writing a letter to the NIAA, the coaches had their decision.

Count PVHS boys soccer coach Chris Roberts, who also has high hopes for this season, among those who were happy just to know what is going on, but the compact six-week competition schedule will present some coaching issues, he said.

“It will be harder to make adjustments because the games will be one after the other due to the six weeks,” Roberts said. “Any injury will be practically a season ended for that player.”

While COVID-19 is less of a factor in the state’s rural areas, from a Pahrump Valley standpoint, athletic programs could not be separated from those in Clark County.

“They really didn’t have an option,” Harris said of the NIAA. “It would be hard to justify sports when students aren’t allowed to go to the schools in Clark County. Being that Clark County is the tail that wags the dog due to their size, and they are who we compete against, it is what it is.”

The NIAA memo noted that out-of-season regulations, traditionally in place during the summer, will remain in place through Jan. 1, 2021. Carrington, Harris and Roberts all said they would continue with workouts while they wait months for real practices.

“We are continuing to have open gym,” Harris said. “The athletes want to play. If they can’t do it through athletic association, they will do it with each other. Open gym has been fun and well attended.”

Roberts has scaled back workouts to two days per week for the Trojans boys soccer program, while Carrington expects to do the same after taking “this week off for sure and then we’ll see what everybody’s doing.”

Of course, depending on the pandemic, all of this still could be a moot point. But at least there is a plan in place should sports be permitted to move forward.

“Only time will tell what happens with all of this mess,” Hayes said. “I just keep praying that the adults in the room start taking into consideration the kids that are being affected in the long run by this.”