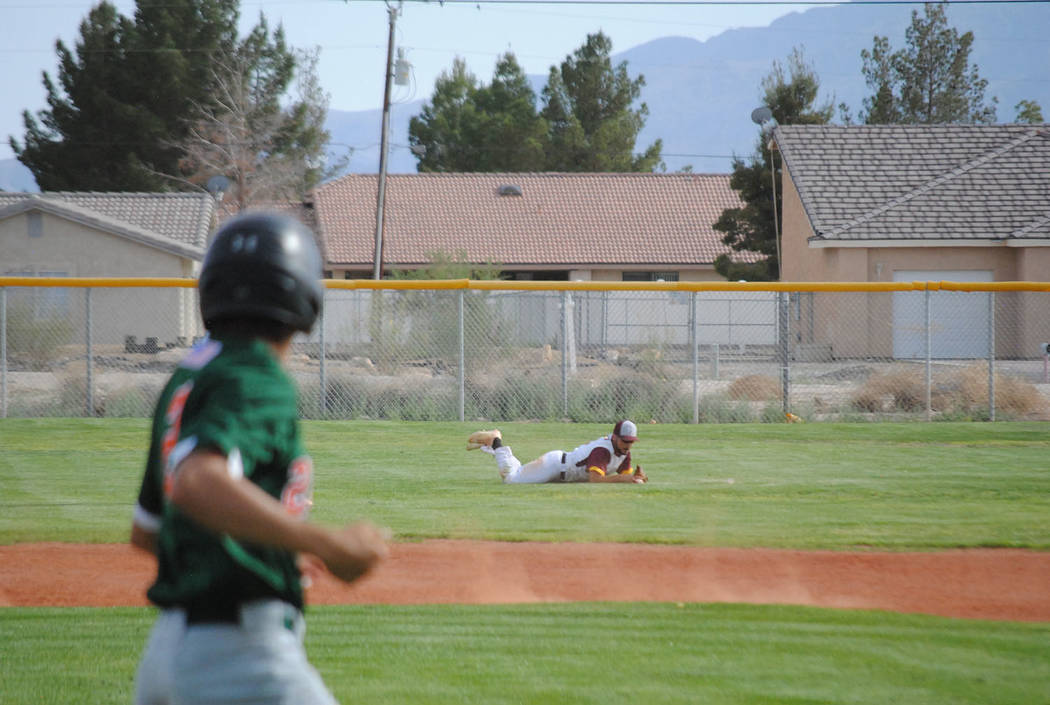 Charlotte Uyeno/Pahrump Valley Times Pahrump Valley left fielder Anthony Charles makes a diving catch during a game against Mojave. Charles singled in a run and scored a run during the Trojans' 5-1 win over Western on Monday. 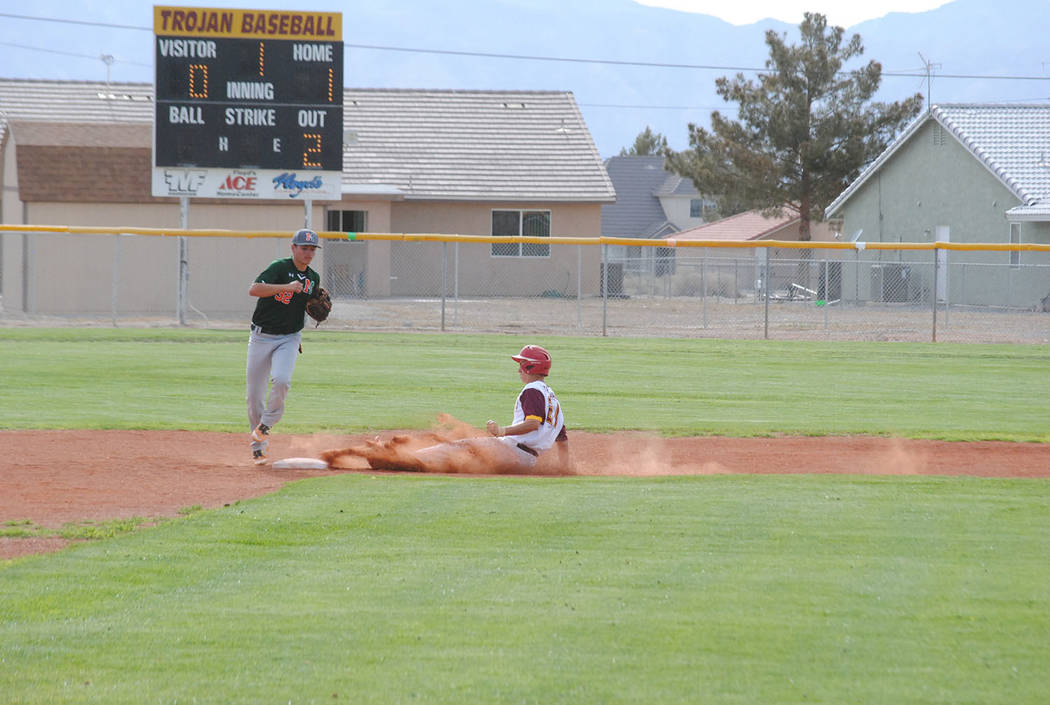 Charlotte Uyeno/Pahrump Valley Times Willie Lucas is safe at second on a steal for Pahrump Valley during a game against Mojave. Lucas hit a tie-breaking double to highlight a four-run fifth-inning rally that carried the Trojans over Western on Monday.

When the ball left Willie Lucas’ bat, both Lucas and Pahrump Valley baseball coach Brian Hayes thought it would be the third out of the fifth inning.

But on an extremely windy day, even by the standards of the Trojans’ home field, they caught a break.

The ball kept carrying away from Western left fielder Tyler Matthews and dropped for a double for the Pahrump Valley catcher, snapping a tie and igniting a four-run rally that carried the Trojans to a 5-1 win Monday over the Warriors in a Class 3A Sunset League game.

“It probably should have been caught, but I don’t think you can assume that in conditions like this,” Hayes said. “It started as a ball in the gap, and it just carried.”

A walk, two stolen bases and a wild pitch made the score 3-1. Anthony Charles singled home the fourth run, and the fifth run was scored on Joey Koenig’s infield single deep in the hole at short.

And that was more than enough for Pahrump Valley starter Garrett Lucas. After the Warriors (5-12, 2-2 Sunset) were gifted a run in the first on a wind-blown infield pop-up, two wild pitches and a throwing error, Lucas was his usual dependable self, striking out six and walking two over six five-hit innings.

“With Garrett on the mound we expect to be in every game,” Hayes said. “I don’t think any of our guys were expecting to be 1-1 with Western in the fifth, but we’re scrapping away right now, trying to slowly get our way back where we need to be.”

The 1-1 tie lasted because the Trojans weren’t having much success against Western starter Gonzalo Lopez, scoring in the first on an error, a steal, a groundout and an infield single. Lopez allowed only one other hit, a fourth-inning double by Dylan Grossell, before the fateful fifth.

It looked as if Western had the best chance to snap the tie when third baseman Michael Davison doubled leading off the fifth. But an alert Lucas threw behind Davison when he was caught in no-man’s land between second and third. Shortstop Chase McDaniel then quickly fired to third base, where Cyle Havel applied a perfect swipe tag on Davison to clear the bases.

Havel made another nice play to end the inning, getting Western’s Christopher Williams with a long throw on a ground ball. The Trojans then made their winning rally in the bottom of the inning.

Pahrump Valley’s roster was depleted because four players were with the junior varsity filling holes in the roster left when four players were ruled ineligible. In a season already marked by player suspensions, issues with grades became just another headache for Hayes.

“I honestly feel like we’re in our preseason stage,” he said. “Usually we have our roles set before the season and right now we don’t have them set.

“We’ve given lots of guys opportunities and we’re just waiting for some of them to step up, and as long as they do within the confines of our season before playoffs, we’ll be OK. If not, playoffs aren’t going to be much more than one or two and done.”

Willie Lucas agrees the Trojans have not yet hit their stride.

“I think defensively we’re doing great. We’re where we want to be,” Lucas said. “But offensively we need work. There are a lot of strikeouts we need to get down and put the ball in play more.”

The win left the Trojans (7-12-1, 3-1 Sunset) tied for first place in the Sunset League with Desert Pines and Mojave.