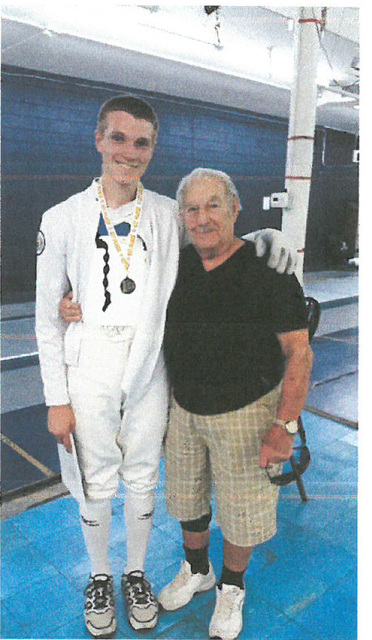 Nowadays, if you mention you are a fencer, people think you are talking about someone who can fix your fence. Of course, that’s wrong; a fencer is someone who practices the sport of fencing, which is a martial game where the objective is to score points by striking target areas on the opponent’s body with a sword.

Dylan Metscher is not only a fencer, now he is a gold medalist one.

Metscher is a senior at Pahrump Valley High School. He started fencing in seventh grade.

In late September, he got his first fencing tournament win at the Vegas Epee and Division Meeting, which was hosted by Battle-Born Fencing Club in Las Vegas. It was a highly competitive tourney.

“There were many experienced fencers that I had never faced before,” Metscher said. “It was an open-style tourney so that means you did not fence people due to age.”

The win his third medal in fencing and his first gold medal.

Metscher is looking forward to more tournaments in and out of state. One of the most anticipated is one of the monthly North American Circuit events. These events are large and only occur once a month throughout the United States. He is also hoping to qualify for the Junior Olympics and the Nationals again in the current fencing season. He qualified for the Junior Olympics last year.

Metscher is being coached by Mel North, a fencing master of the Salle de Nord Fencing Club in Pahrump. He attributes his success at this sport to his coach.

North is an international fencing master who has coached numerous world champion and Olympic level fencers. The Maestro has trained men and women who became high school, intercollegiate, and national champions in the three competition weapons, Foil, Epee and Sabre.

North was inducted into the UCLA Athletic Hall of Fame in 2013. He coached the Bruin fencing teams for more than 20 years, posting 19 conference championships and an unmatched record of 174 Tri-way consecutive wins.

“I think in comparison to others my age I have grown a lot in this sport,” he said. “At one time for a period of two years I was the only one in Pahrump’s fencing club, which gave me a lot of one-on-one time with a fencing master.”

The club has grown along with Metscher’s experience.

“We have four more members now,” he said.