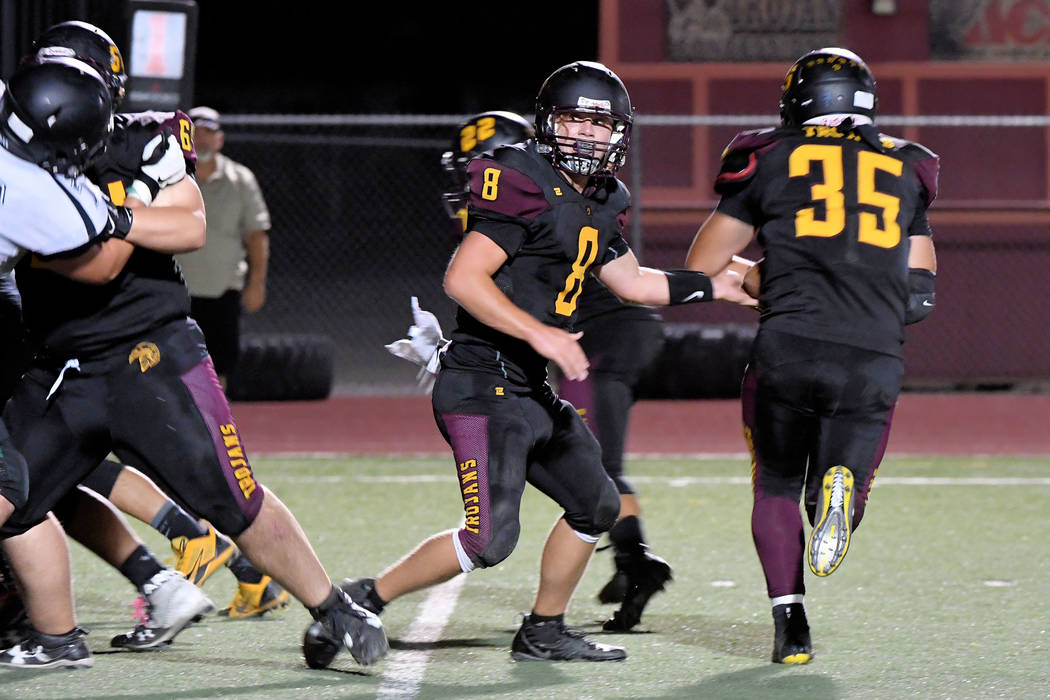 Peter Davis/Special to the Pahrump Valley Times Pahrump Valley quarterback Tyler Floyd keeps an eye on the line while handing off to Nico Velazquez during last week's game against Virgin Valley in Pahrump. 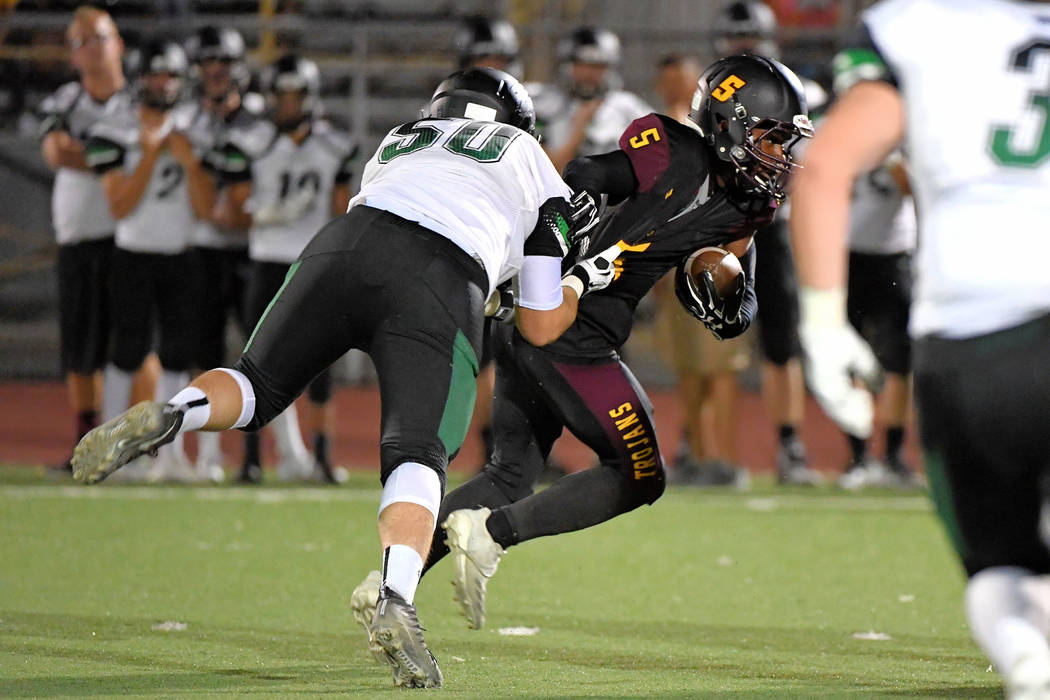 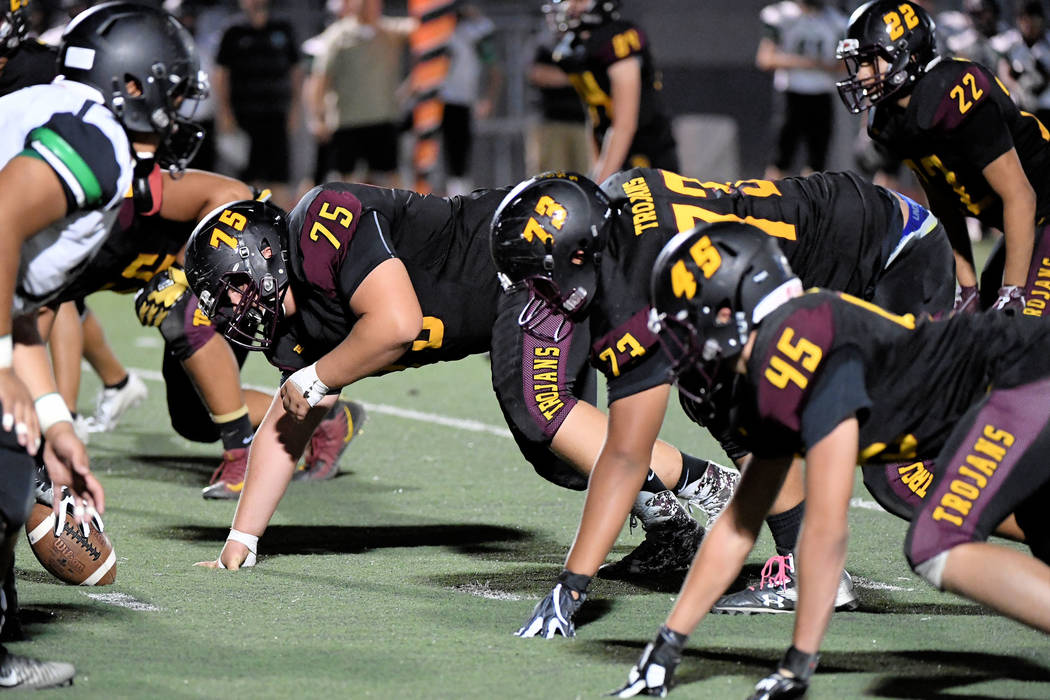 Nobody on the Pahrump Valley High School football roster expected the Trojans to be 0-2 after two games. It’s safe to say none of them expect to be 0-3, either.

“We’re fine,” said senior Nico Velazquez, who has averaged almost 10 yards per carry and has scored five touchdowns already for the Trojans. “Our spirits are still up. We’re not down.”

“We just focused on what we needed to practice on, and we’ll get it done,” senior lineman Brandon Bunker agreed.

“We have to start fast and finish strong,” Velazquez said. “The first week we finished really badly, and the second week we started bad. We just need to put them both together.”

Starting and finishing strong is easier said than done, of course, but tonight’s homecoming game against Sunrise Mountain would be a fine place to start.

“I think our team knows we can do both, so we’ve been working on trying to combine them this week,” said senior linebacker Dylan Grossell, the team’s leading tackler. “Now that we know that we can do it, I think something’s going to flip in our head, especially with it being the homecoming game. For our seniors, it’s going to be our last homecoming game, so I just think that’s going to ignite a spark in us.”

“Great attitude,” he said of the week in practice. “They know what they’re capable of, they know they’ve been underachieving. Going into homecoming, they’re aware that it’s time to flip that switch, and I think we’re excited to see that switch being flipped.”

What has not made sense to Clayton is that the strong start came on the road — after a long ride to Winnemucca, no less — and the poor start came at home, when the first home game of the season brought out a boisterous group of student supporters.

“That was the one thing that was a surprise to us, to come out of the gates in the first home game and they didn’t perform,” Clayton said. “We talked about being flat. They knew they were flat, and they’re prepared to give us a full game. If they give us a full game, we’ll be successful.”

His players sound ready to do that.

“We feel like we definitely can do better this game,” Bunker said. “We’ve worked on the sort of things we messed up last game. We’re not going to make the same mistakes.”

For Clayton, all the Trojans really have to do is exactly what they say they want to do.

“Sustain our drives, follow our philosophy, which is just grind the ball, first downs, run the clock,” he said. “Defensively, we just have to attack the football and keep them from getting first downs. Just the basics of the game.”

But the Miners have a new coach and a new offensive philosophy, not that it worked out in a 36-0 opening loss to Del Sol last week.

“They have a new head coach, so now they basically turned into a run offense, and I’m really confident with our defense to stop the run,” Grossell said, noting that pass defense was the Trojans’ problem in their two defeats. “That’s what we do, we stuff the run.”

“We know that they love to run, and honestly that’s what our defense is meant to stop,” Velazquez added. “We’re looking to shut them down, and offensively do what we do.”

“We watched the film,” Clayton said. “They’ve got some size up front, but I think we have more power and strength than they do. We’re pretty confident in our offense. We’ve proven we can run the ball. Even against a good Virgin Valley defense we got a couple hundred yards. We look at it as they have their hands full stopping our offense.”

Clayton was pleased to hear Bunker, Velazquez and Grossell all expressed a high level of confidence in the Trojans’ ability to break into the win column tonight at home.

“Not surprised at all,” he said. “Simply because of the time we put in going back to camp. Friday night’s a lot different than a camp, obviously, but these guys have been in the trenches. We’ve seen them win big games the last couple of years. They’re just ready to bust out.”