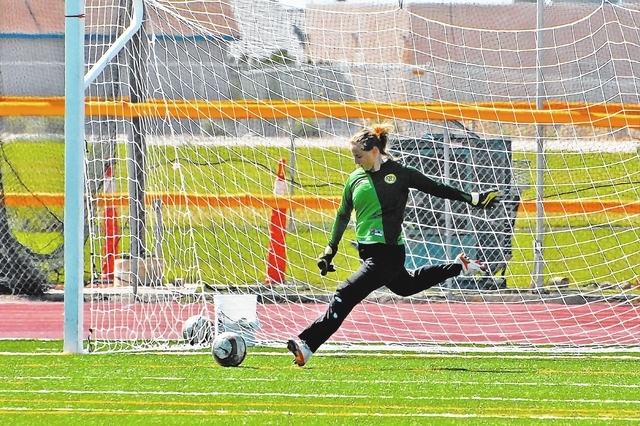 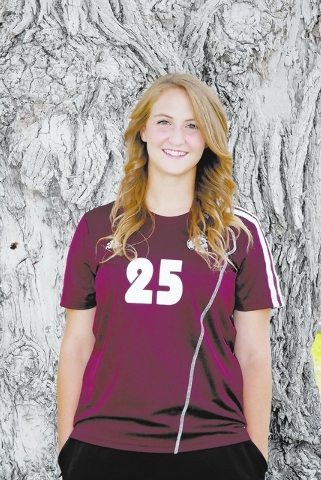 Trojans girls soccer games can be an intense experience, especially if watching from the field. On any particular game day the loudest voice you hear won’t be coming from the coaches, it’s coming from the goalkeeper, senior Kiaya Nauck.

Nauck is like a general directing her army. She knows the game of soccer and has been coached well. She has been playing since she was 8 years old. She knows exactly where her defenders should be on the field and if a player is out of place, she is not afraid to express her opinion. Her entire personality changes when she is on the field. She goes from a charming young lady to Ronda Rousey.

“Yes, I am loud, heck ya — sometimes bad words come out of my mouth, but I just can’t help it,” she said. “I am sorry about that. I get into it and I yell and get mad. When you are in an actual game it definitely comes out. You are in the game, that is what it is.”

Nauck has been the goalkeeper since her sophomore year and the Trojans took their first state championship. She believes it was her best game ever.

“I always think about that game in Reno against Carson. That was the best game I played in my whole life. I don’t really know how I did the stuff I did. I am telling you, angels helped me and moved my body. There were probably three or four saves that were impossible, but I did them anyway. It was just crazy,” Nauck said.

Her other favorite moment was during the recent Arbor View game, when one of her best friends, senior Sydney Sladek, kicked a 65-yard goal from a free kick at Arbor View.

“That 65-yard free kick Sydney made was just amazing,” Nauck related. “Sydney got fouled right there. Someone pushed her from behind. I was freaked out, whenever anyone from my team gets fouled, especially when people foul Sydney, I hate it. Sydney kicked it and it was the perfect kick. It bounces in front of the keeper, and the keeper was out past the six and she should not have been there, not for that kind of kick. It bounced and went right over her head and in. Everyone was freaking out. Sydney went crazy and ran all the way back to give me a hug.”

Nauck loves the game of soccer, but she will not be playing in college. It’s not because she couldn’t — she definitely has the talent. She probably could get a scholarship with any college to play the game.

Her head club soccer coach for 10 years Joe Sladek believes she can play wherever she wants.

“She is quite the character. She does not want to pursue soccer in college. I have coached her for 10 years. If she wanted to put in the work and pain, coaches are always looking for keepers. Most college teams carry three to four keepers on their squad and it is hard to find enough keepers who have club experience to add to their rosters. They are easy to place. It’s too bad. Keepers are a different breed to begin with and she fits that role completely. She has a strong leg and she was not afraid to stop balls going to the goal. You have to have a different mindset to be a keeper,” he said.

Nauck said she won’t play in college because she loves the game so much. The game has meant so much to her in the past that she wants the memories of playing to be like the Carson game. She knows if she would continue on playing it would never match that.

She wants to go in an entirely different direction. Upon graduation, she wants to become a chef and enroll in culinary school at the Art Institute of Las Vegas.

“I love to bake and cook,” she said. “I like to cook anything, whatever I am in the mood for. If we have the stuff at my house, I will cook it. I love eating and I love cooking for people. Whenever my friends come over I am always looking to feed them something. That makes me happy. I am really hard on myself on the cooking, so if I mess up, it sounds like I am in a soccer game and I get so mad.”

The decision not to play in college has not been an easy one. Nauck has thought long and hard about it. She knows herself well and made the tough decision.

“Most girls want to go into college and play,” Nauck explained. “I really don’t want that. I stopped playing club last year. When I was younger soccer was something. I wanted to do it as a career, but the older I got it just wasn’t something I wanted to do as a grownup. To be honest, I don’t like the fact the older you get the more serious it becomes. It’s not fun anymore for me. I started playing soccer for fun and the fun went away a long time ago. Once the fun went away, it was something I decided I don’t want to do.”

The young player over the years has developed her own philosophy on life. It came from thinking about soccer.