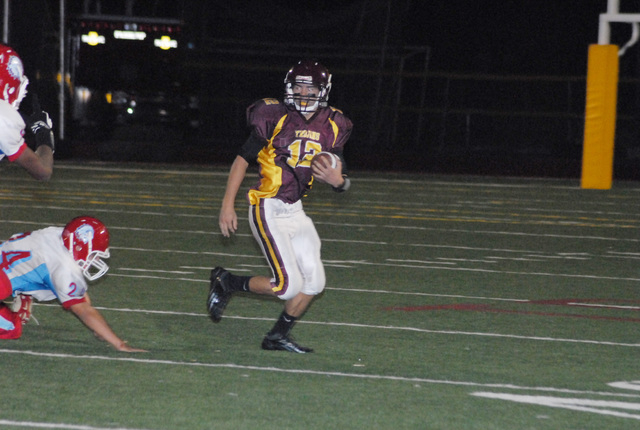 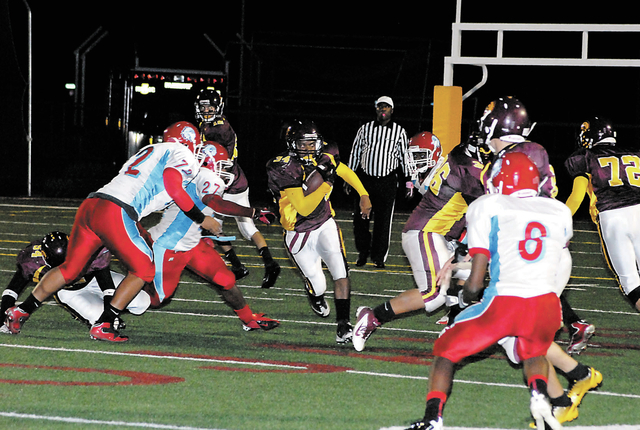 Trojans football is headed to play the Western Warriors today at 7 p.m. The Warriors have not won a game this year.

Last year the Trojans beat them 21-8 and are looking to beat them again, but a whole new Trojans team will face the Warriors this year. Last year’s offense relied on the pass to move the ball and averaged 70.9-yards passing and 90.7-yards rushing.

This year’s Trojans will attack Western with a far more potent rushing game that few teams could stop. Senior Scott Maughan is the Trojans lead rusher with 137 carries for 546 yards. Secondary running back, Senior AJ Segura has 229-yards rushing and is also the lead receiver with 11 receptions for 257 yards. Junior Deon Estes is the second reception leader with 9 receptions for 162 yards.

The Trojans lost to the Cheyenne Desert Shields 58-52, but managed 414 total all-purpose yards against this team. Pahrump had 44 carries for 197-yards rushing in that game. This was against a decent defense and the Warriors are a team that on average gives up 54.2 points per game. Look for the game to be high scoring for the Trojans.

The Trojans are 1-2 in league tied with the Clark Chargers and are fighting for the fourth spot in the league. The top four teams make the playoffs. Cheyenne and Mojave are fighting for second and third at 2-1.

Clark played Mojave last night and play Cheyenne in their last game, while Pahrump plays Western and Mojave. For the last two games, Clark and Pahrump must win both their games to ensure fourth place. Since both teams play Mojave and would have one game remaining, a tie is possible. If both teams end up with the same record, the Trojans will go to the playoffs because they beat the Chargers in league play.

To date, the Trojans offense is playing their best football in the last three years by averaging 162.6-yards rushing and 86.7- yards passing.

Segura is having a blast as the lead receiver and secondary running back. He can do pretty much everything. In addition to his offensive positions, he is also a leader on the defense too. The multi-talented player is second on the team in total tackles with 33. He says the team is ready to go against Western.

“We are still the same and we are having a good time, but at the same time we know when it is time to work and we still push each other,” he said. “We know as a team we can’t just walk into any game and expect to walk over somebody. I am not going to say we will beat them automatically, but we will go in there and make sure we have our assignments down and hopefully we will get a big win and it carries over to Mojave. It’s pretty much a confidence game going into Mojave.”